ONE BUT DWARFView game page

Sacrifice your friends to leave the mines
Submitted by PitiIT — 3 hours, 20 minutes before the deadline
Add to collection 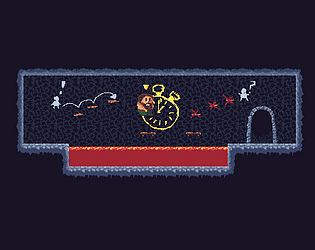 ONE BUT DWARF's itch.io page

A lovely platformer! I enjoyed absolutely everything: the art, the soundtrack, the sound decor, the hard, unforgiving maze. Great job :)

I like the concept, but the margin for error could be a little bit higher, because it's so frustrating me at this point d;

Submitted
The real one.
LikeReply
FTWRahulSubmitted2 years ago

Good use of camerashake. The jump does not feel super good tho I understand you are a dwarf but still the jump is very stubby and makes for tedious platforming .

Nice job with this game!

Good fun for a little platformer, as long as it kept adding mechanics as you go it'd likely hold people's attention pretty well.

Very cute little game with nice idea, great movement and bad difficulty curve. The game is hard from the beginning and didn't teach the player some feautures of the game, like dying if you fall from a height. Anyway, nice work.

Submitted
One Spear, One Kill
LikeReply
Team HorseheadSubmitted2 years ago

I couldn't pass the second level! But I had great fun playing this!
It's a cute game, I would love to see this developed more, I think it could go really far! Wouldn't it be cool if you can change characters and have all the different dwarfs from snow white!
Great job for making this game in 48 hours, from the screenshots, I can see you have lots of different levels which I couldn't get up to! So amazing job!

Submitted
Only One Recruit
LikeReply
oscfriSubmitted2 years ago

I couldn't get pass the second level. Too many near pixel perfect jumps for me :(

As soon as the jam is over, I will update the game version to one woth more forgiving jump! :)

Great game! I think you should make the spear hitboxes more lenient, but great job!

Thank you so much for your feedback :)

Great game and well polished! But just too hard for me .

Submitted
IT'S MINE
LikeReply
PitiITDeveloper2 years ago(+1)

Hey, thank you so much! The jump is already improved so the whole game is slightly easier.  I will update the game as soon as the jam is over.

Hey, thank you for the feedback. Please come back after the jam to see improved version with less annoying jump :).

Difficult, but great fun~
Honestly I'm surprised how many levels you have crammed into this; you didn't use your time idly O-o

Thank you so much for your feedback :). I tried to organize my time well. I set clear targets for each they (and I still managed to be delayed).

On friday I made a brain storming and started to create the art to get a bit more inspired. Next day morning I woke up with completely different idea and I decided to follow it. At end of Saturday I planned to have all main mechanics ready + all levels designed (I planned 15 + tutorials). In the evening I realized I am having only 7 levels and tutorials - so I had to reduce the plan.

Sunday also went a bit slower than expected - I decided to create nice menu art, which... looked terrible and landed  in the bin :D. It took me around 1.5h to draw it. Then I had to redesign 2 levels (including the level 2 which turned out to be too hard now).

I was quite sad because I hoped to make the artstyle improvements - add some elements that break the color scheme of the game and make it more less boring, change the animations of the dwarfs etc.

I hope to do that all after the rating is over! :)

I know the feeling: what seemed like plenty of time was eaten up faster than planned, in my case, by just getting everything working correctly ^^;
(Though I certainly didn't manage my time that well)

Honestly I'd say you did a great job in the time
Though as a creator, it's always hard not to look at your own work and see all the things you wanted to add/improve huh

This game is fun but hard since it depends a lot on very precise jumping. I lost in level 2 nearly 10 times before finally winning. The puzzles are really good but not as challenging as the execution itself. The pixel art looks really good and the sound are so funny. Great work.

I am sorry about the level two! You will not believe but initially the level was too easy - I thought this will not present any challenge and people will get bored easily. It turned out being afraid of the game being 'too easy' I made it 'too hard'. I will definitely decrease the difficulty once the game jump is over. The game should not be about precision jumping and artificially rised difficulty level but rather about logic and cooperation!

No need to be sorry, your game is great and difficulty tuning is always hard (I never got it right). I think that rather than decrease the level difficulty. You can make the jump easier. For example, you can add some coyote time (small time window after falling to jump), and edge grasping if the character falls very near the edge of the platform. There are many other things that can keep the level layout hard but platforming easier. A developer for Dead Cells talked about it in GDC  (starts at 12:33):

Thank you so much for your thorough input! This is actually very good point. Even though I will add the coyote time - there is still some redesign I still think some of the challanges are not designed properly (the elements that should be hard are often easy and the once that are supposed to be easy are just crazy hard)  :) I will definitely have a look at the video.

Thank you! I will check your game for sure :)

Pretty cool especially if it's your first jam !

I like how the game quickly adds that "Lost Vikings" element where you have to swith between characters and go one at a time, it's an interesting take on the theme as well, the pixel art is really well made as well, also the self made (i suppose) sound effects are awesome, made me laugh cause there's a lot of jumping in the levels so the Dwarf's like "Hyup Hyup Hyup Hyup"

Congrats dude its a neat game :)

Haha, I am very happy you liked them. I hope jumping sounds are not too annoying. I did actually wonder if they are not too 'heavy'. Thank you so much for your generous feedback! :)

Congrats on completing the gamejam. I like the concept you were going for and the extra detail you put into the level design (ie, the way you did the tutorial sprites in the first level). I had difficulty trying to get more than one dwarf on the screen (the dead one's did not stay on the screen) but I imagine that was down to me not understanding how to use that mechanic. Did you limit the amount of hang-time in the jump cycle to increase difficulty?

Hey, I am very happy you like my game :). Regarding the questions - I used standard controller provided by my game engine and this was clearly a bad approach. It does not have any configuration option regarding jumping besides the strength of the jump and gravity.

I do plan to decrease the difficulty as soon as the jam is over - i am going to redesign the levels significantly :).

Well done for completing your first game jam game, it's really cool :) ! I love the pixel art and sound effects. Running through this dungeon with a stout dwarf gave me a lovely dungeons and dragons feel. Level 2 was really hard for me xD, but thankfully restarting was pretty fast, though having the fade in even FASTER would have been awesome :)
All in all good job, keep it up !

Yaaaaaaay! This is awesome. Thank you so much for taking time to play my game!

If you are just starting to do pixel art your definitely on the right track, the art is awesome! sound effects are on point as well. Really like the challenging platformer with the unique way you use all the dwarves

I have been doing pixel art for a while - however there is still a loooooooooooooot of things for me to learn. Thank you for your feedback! :)

Pretty nice! The effects are nice and it was very clear what each thing did.

You did an amazing job polishing the art and presentation. The level design was also top-notch!

Submitted
Only You
LikeReply
PitiITDeveloper2 years ago

Thank you! I am very happy to see you liked the game :).