Snots live for only one minute.
Submitted by Blackthornprod Games (@NoaCalice) — 3 hours, 38 minutes before the deadline
Add to collection 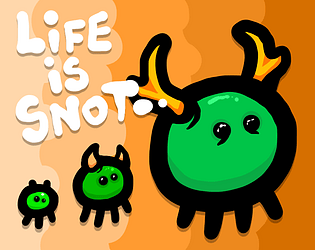 Ranked from 306 ratings. Score is adjusted from raw score by the median number of ratings per game in the jam.

Nice graphics, fun game! I included it in my GMTK Game Jam 2019 compilation video series, if you’d like to take a look. :)

Cute game, it was VERY difficult though. I'd love to see better level design but keep to the same mechanics and exploration!

This is weird, interesting art but not much of a game?

it is a ok game

LikeReply
Next LevelSubmitted3 years ago

Its sweet and at the same time melancholic aspect give it a very accurate originality.

Love the art style, reminds me a lot of old flash games like fancy pants! The exploring gameplay isn't my thing but I can definitely see it expanding into something interesting.

Submitted
Only One Way [GMTK JAM 2019]
LikeReply
TurbowizardSubmitted3 years ago

Beautiful game! I love how the "only one" is so important to the narrative.

Beautiful game! I love how the "only one" is so important to the narrative.

I just watched your devlog about this game.  It is so great!  I like the aging concept.  Could you please check out my entry~  It is made almost completely by learning Unity on your YouTube channel :D

Submitted
Only One Arrow
LikeReply
ProdigalSon GamesSubmitted3 years ago

Such a sad story with such a lovely when you find love. lol :D It's neat idea, well implemented, with fun aesthetics, funny sound effects, and easy to follow objectives. The camera is a little fast for my taste but then again the whole game is supposed to have that rush feeling since I only live for 1 minute :D

I loved everything about this game, however, I did notice a few issues.

1: The time speedup worked really awkwardly. It sped up Time.timeScale itself, not just the aging process. This led me to fly off the edge numerous times.

2: The game seemed laggier the more I played it, to the point of around 10 frames per second, but this may have been an issue on my end. After a refresh it worked fine.

Other than these, this was a wonderful, cute and fun game! Well done :)

That was so adorable adventure. WONDERFUL

Great work Noah! Glad you made it in time with 3 hours left. Game is really interesting

Submitted
The Only Light
LikeReply
JayLeCavalierSubmitted3 years ago(+2)

Design [2/5]: The concept behind the game is nice. It's cool that each character only has one minute to live, and I like that you're put under such a high-pressure situation. However, there are some drawbacks in the details that hindered the overall experience of the game for me. Here are some examples:

Adherence to the Theme [5/5]: Not much to say here. You only have a minute to live. Cool concept!

Originality [4/5]: I have seen platformers with extremely short time limits before. For example, most of the levels in New Super Luigi U have incredibly short time limits. However, those are straightforward platforming levels while this game is more about exploration, so that makes it a somewhat unique experience (ironically, I think this decision is also the game's biggest weakness).

I know I had a lot of harsh criticism for this game, but that's partially just because of how much potential there is here. The art style is cute, the music is nice, the game is generally well-put-together. I think that if the level design was more thought-out, the objective of the game was more focused to emphasize the strengths of the core concept, and the game did a better job of teaching the mechanics to the player through level design and tutorials, then this could be a really nice game. I know the developers put in some hard work here, and I appreciate all of that. Having said that, it wasn't a very enjoyable experience for me.

Smart use of the theme, that one minute soundtrack is very pleasant as well as it embodies the concept and the narrative. And I like the fact that you have to discover your evolving abilities. Again, quite smart.

Superb, but flying was never explained, nor did the changes in the elderly age look like wings... I tried several lives to find a sweetspot of jumping height for the icy uterus obstacle  :D

Not intuitive level design and weird controls. nothing to say about art and music which are very nice, but it's not rated.

Submitted
Only One Way Down
LikeReply
Platypus Studios3 years ago

Paul and JF are huge fans of your Youtube channel so this was a treat for them to play on stream last night. The concept of aging providing different abilities and obstacles was a really unique take on what could have been a really banal idea. There's a lot of areas to explore and quite a bit of replayability that is surprising for game jam titles. The only criticism that was brought up was that a few of the aging abilities or traversal were a little unclear that led to starting over.

This is a great little game and we look forward to seeing if you develop this further!