You've only got one shot...and you're it.
Submitted by Team Spaghetti, Musik Kombat, runBAMrunfaster — 2 hours, 26 minutes before the deadline
Add to collection 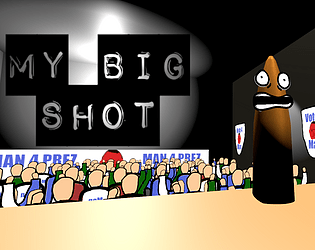 the front menu screen, apart from the slight scaling for resolution it was spot on.

it incorporated the whole game essence in that screen, by that i mean adding the jumping croud, it showed a peek at the mechanic, as well as having some dynamics to a normally static menu screen that we see. the startup vocal was a nice touch too ;)

gameplay. again, as mentioned had to sort of play around and guess the controls since they were off screen.  but that aside it was easy enough to guess from the first couple letters.

played really nicely i must say and the collisions were alot more forgiving than i was expecting.

but man, i couldnt quite get past the bodyguards, they are solid. thought about rattling through quickly, but just didnt have the time to adjust movement by the end, so the "this is gonna be easy" concept was out the window heh. timing and adjustments needed, and for that it made me think more than i was expecting to do, so really well done from a gameplay (er) side.

All in all, great job in getting a completed project out in the wild, and you should be proud of it, as theres alot in there that showcases alot of different aspects, thoughts and techniques.

I find this game charming because of how much I relate to the bullet. I, too, was shot out of a canal and have not stopped screaming since.

As are we. Scream on friend, scream on.

This made me laugh a lot - particularly the bullet's scream (and face, of course). I did encounter an issue with the resolution that cut off the controls, so it took me a bit to get the hang of it! Great job otherwise :)

Submitted
You Can Only Jump Once
LikeReply
TheBigRoomXXLSubmitted2 years ago

Crazy concept, I love it!

Finally getting around to playing your game after your lovely feedback. This rocks! The aesthetic is perfect. Loved the voice while you're flying. (Also shout-out to the airborne security guard's butts.) I had a huge grin on my face the whole time.

My only criticism is that it wasn't difficult enough--I would have preferred to have a faster base speed and more obstacles to dodge. Also it felt like I was constantly veering to the right when I wasn't steering which was a bit irritating.

Overall well done! Thanks for the giggle.

I found this entry to be very funny. I enjoyed listening to the bullets internal monologue before firing as well! Poor Mona Lisa... she didn't deserve it. It reminds me of the 'Wanted' movie, where they curve the bullet XD

I'm not sure if it was intended, but I seemed to lose control when left clicking to go quickly. Also, the instruction text was cut off on the sides of the screen (I'm in a 16:10 resolution, so that might have been the issue). But I was able to figure out the controls anyway. The game itself is fairly simplistic, but the humor fills in the gap somewhat. I could see myself playing for a while if you were given more control of the bullet and more challenges to overcome (and obviously more levels!)

We've gotten a few people mentioning the resolution issues and that's on me (runBAMrunfaster) for not being up to snuff on how unity handles that sort of thing. One of many things to tweak and fix post-jam! More content is definitely on our mind, and I think we both plan to continue tinkering for as long as either our or other people's interest in the project last; whichever lasts longest.

Haha this is a really funny game, definitely not what I expected and that scream was epic! Not sure if it is just me, but I kinda hope there is invert control: W button for moving up and S button for moving down. Good job regardless, the game is unique!

Just because you said that, we'll make it one of the first new features we look into adding.

That was really f*cking funny! I thought the yelling was just a repeated sound effect but than I heard the breath and realized somebody actually had to make that sound. Great comedic value in this. Would assassinate Mona Lisa again.

With apologies to runBAMrunfaster's neighbors.

hAHAHAHA Epic, you can really hold your breath! that scream was the heart of the game. Really great job! SUper fun

Oh god i can't believe how much fun this was HAHAHAH

You REALLY need to continue this. Oh i beg you. Hearing those goddamn monologues and that bullet's voice and the whole tone of the game was just fantastic. Don't change anything, just, MORE. AHH.

I am serious, polish up the aestethic (it's a bit on purpose but i know you can make the whole thing look really nice if you try), keep up the ridiculous writing, make some more different challenges, maybe some levels where you can move even more than normal, or always go fast, or something, and you got a hit here. Oh god the monologues made my night. This was hilarious. Such a nice way to go to sleep.

Oh, oh! The menu and the instructions where out of bounds for me, they'd just go out of the screen. Playing on 1366x728.

Keep it up. I need more.

Submitted
Only One Tower
LikeReply
shantaramSubmitted2 years ago(+1)

Holy crap, this was fun! I can imagine being that bullet and being shit-my-pants nervous, and the sound effects were on point! It's a nice little game! I would have liked for the bullet to be a bit faster, though, or the room to be a bit shorter. There's tons of only one bullet games this jam, but this is one of the nicest takes on it, and tbh I found it very relaxing / therapeutic, for some reason. I have to ask, does the sound rise in pitch when you're going fast or am I just crazy? And if it does, is the effect generated in code or do you switch the sound fx out?

I toyed with the idea of adjusting the pitch based on speed, but ended up not having time, unfortunately! What you're hearing is the natural pitching of my voice as my poor lungs expell their last ounce of air! Were we to implement that, it would probably be through code, assuming we could get the effect clean enough. I'd rather modulate it programatically rather than  triple the file size of that asset or--gods forbid--try to replicate the same scream three times.

Thanks for answering. Out of curiosity, how large was the scream sound file?

The voice acting and personality really took this in a unique direction. An interesting take on the one bullet

Submitted
It only takes one
LikeReply
RyoonSubmitted2 years ago(+1)

This is really great and not what I expected! I thought the controls were good- tighter steering when slow and nice effect when going fast. The timing challenge with the bodyguards was tricky. Great humor and storytelling, I like the foreshadowing to "Pineapple Man" outside the supermarket

This is without a double my favorite interpretation of 'Only One Bullet' in this game jam. Well done.

Thank you so much! We knew it was going to be a common take, so we decided to be the ones who had the most fun with it.

Very funny game! The lines cracked me up :D

This game is brilliant and hilarious. My complements to the artist.

Hey that's me! Thanks!

The Mona Lisa dialogue had me lol-ing. That speed up mechanic was key. I got caught on some invisible hitboxes here and there and sometimes I kinda felt like when you're bowling and you're leaning super hard to the side to try to force your ball to go - would have appreciated more fluid controls, but I dig the humor and originality of this game!

Glad you liked it! I believe that after the game jam we're planning on releasing a patched version with updated and easier to use controls and fixing a few things here and there. Thanks for digging our humor I'm glad you got a good chuckle!

Although at first I found the controls a little bit too clunky, the game is just really funny and has a lot of personality. It's really fun to just wander around with the bullet before reaching your target. Great game !!!!

Submitted
ONE BULLET, ONE LIFE, HALF A MINUTE
LikeReply
Jaden Goter (picross)Submitted2 years ago(+3)

Hilarious game, energy similar to parappa. Loved everything about it, although it took me a while to get used to the controls. Great work!

You know? I don't think the Parappa vibe was intentional on our part, but I can totally see it. *makes notes for future*