X is a game made with one sprite an X, and that uses only one Key, you guessed it.. "X"
Submitted by Webox (@webocs) — 3 hours, 16 minutes before the deadline
Add to collection 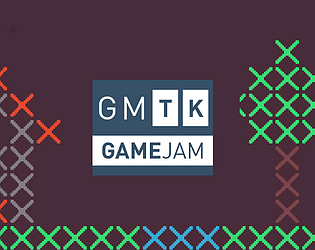 I really liked the concept behind this game and it was well executed.

Really nice game. I like the idea and the visuals. The only problem I faced was that double tapping to change direction was hard to do. Other than that, it is really well done.

Hey thanks a lot for playing!! Yeah, I missed some time for polishing.. The updated version fixes most of those issues! I'm glad you liked it

The visuals being only represented in Xs was a funny touch, it made it very clear which button I had to press in order to advance haha

I would've thought that a single-button puzzle platformer would be difficult to understand, but it seemed clear in this game, nice work!

Thankks a lot for playing!! I'm really glad you liked it, It took me a lot to come up with an idea, which ended up in a non polished game, but hey.. at least I managed to submit and had fan with it! :D

Hey there, I loved the cute little graphics that you pulled off with all the X's. And a smart choice to make the main character not be a full X cause that certainly would've been confusing. I feel like this game could improve from a little playtesting considering it felt like some of the paths in the levels kindoff let you to get stuck. But I like the concept.

Double tapping felt a bit stiff, but the mechanics that were in definitely gave you a nice run at how much you can really do with a 1 button design! Creatively done and thumbs up!

Submitted
The Revenge of Dr. Snookums
LikeReply
WeboxDeveloper2 years ago

Hahah yeah, as I stated in a lot of comments.. I missed the time to polish it, it's a pain to play.. But at least I'm glad that the main idea that was in my mind managed to get to most of you :D .  The idea of cutting the X an arm came out when deciding to be able to turn double tapping. At first the was going to be a played walking in only one direction.

When I decided to turn I was like.. hmmm.. and how do I know where the hell am I looking at?.  In my head was the idea of using it as story driver too, the search for the missing arm to become a full X again. But time passed so so fast that It ended up as a far away idea.

Thanks a lot for taking the time to play it! :D

Hey thank you for playing it!! Yeah double tap ended up being a pain to combine with hold.. It took me a lot of time to make it at least usable. I wasn't thinking really straight during the last hours of the jam so I wasn't able to polish it (that and collisions!). I'm glad you liked it!

Last Level is little bit hard but very interesting game. Your theme is extremely match with the Theme and I never played the same type game before. Your game have more potentials and looking forward to play more levels in your game. Honestly, Nice Puzzle game! 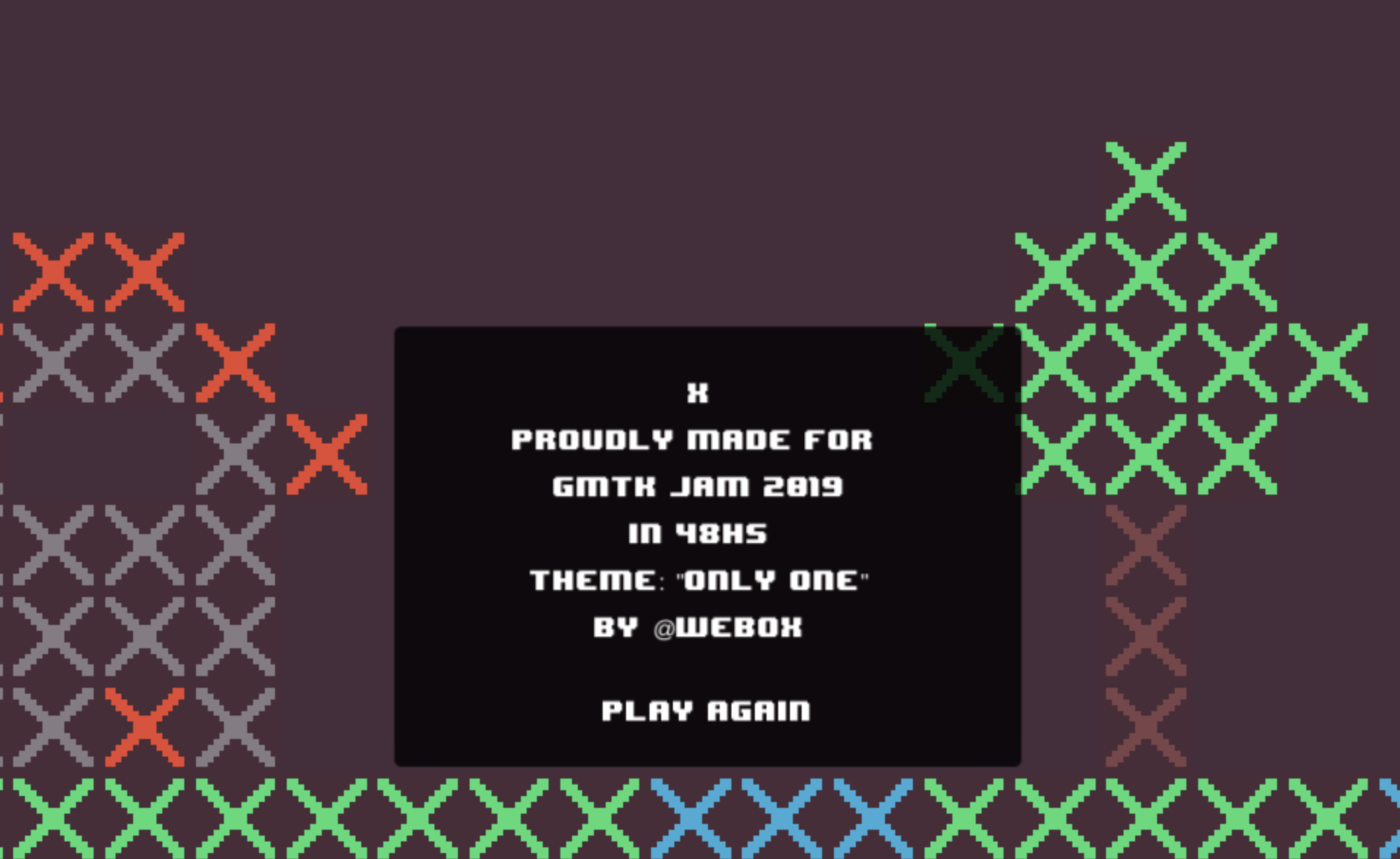 Submitted
The only
LikeReply
WeboxDeveloper2 years ago(+1)

Huge thanks for your feedback!! I'm really gald you liked it! I ended up seeing good potential after all and ended up really liking it myself too :D

I really like the visual style. You managed to get quite creative with just Xs as sprites.

Hey thank you for taking the time to play!! :D. It's pretty fun to draw with Xs, I'm super bad with art so it's a releif for me.  I'm trying your game, looks cool!

not easy but pretty good also there where some collision bugs

Thanks for playing!! Yes, collisiones where really buggy, I missed some work time and wasn't able to polish it. I uploaded an updated game that fixes those isssues. It's a much better experience towards what I imagined for the jam

btw i did a video when i played the game

it is in this video 16:25
LikeReply
dorodoSubmitted2 years ago

It's a really nice concept for the game, although it was quite buggy on the first version (there still needs to have some polish with the mechanics and physics of the game). Overall, I really liked the gameplay, and felt like this is the best take I think one could have for a single-digit platformer. It's a fresh approach on a genre that doesn't have much room open for originality. Good job and keep improving!

Thank you dorodo!! I really liked the feedback. I'm happier with the result now that I read all of the player's feedback. Tbh I thought the ide was dumb during the jam and was about to quit. I'm so glad y finished and submited. Thanks again!

however the platformer is extremely buggy and the timming for the double clicks is challenging at best and incomprehensible at worst. please let me know when you update it because I really want to see the end :)

Hey htanks a lot for taking the time to play! As I stated in some comments, yeah, controls sucked and I wasn't going to submit, but I ended up gaining some courage and made a final effort to finish a playable version haha. I will update it, I'm working on it afterwork today. :D

Since you wanted me to notify you, I've created an updated version of the game! https://webox.itch.io/x-postjam .. By now it only fixes movement and collision related issues. I'll be adding more levels and polishing more rough edges  this week!

I found out I might just be stupid lol
Sorry for being so harsh on you and thank you for notifying me I really like your game :D

P.S.: I made it but I'm craving for more levels :L

It's a really good game

Haha no worries mate, no need to be sorry! It's good feedback! :D .. It's a pretty busy week but I'm working on more levels

This was a short bur also a very original one. I like the idea of the game very much. But i also think that the controls of the character could be more precisely. But how ever very nice entry, well done!

Hey thanks a lot!! I'm glad you liked it, I will update it for sure! to complete at least the version that was in my mind during the jam!

This was a really cool take and liked seeing the combinations of different colors + one key being used here. The level design was really well done, hitting that green jump into a blue X felt great.

My favorite detail was being able to blend in with the colored Xs. I felt like a chameleon just chilling

Haha ninja X! Thanks a lot for playing clarkwu!  I replayed that level a lot of times to make completable with all the bugs haha. I'm really glad you liked it!

Good idea at combining multiple things to have a stronger "only one" adherence to the theme. I understand the fact that is a jam, but still, I was struggling so much on getting the jumps right for the green one.

Submitted
The Bouncing One
LikeReply
WeboxDeveloper2 years ago

haha yeah I know, Trust me it hurts me more xD. Thanks for taking the time of playing :D

Hey! Awesome idea, i like the use of one button for multiple controls and having to navigate around the map to get to them.

Here are some things I found:

Like others have said: the double tap X to turn around is a bit hard to perform. Especially when Im green and the causes me to jump.

Movement is very slow at first. I think it would feel nicer if it was more snappy.

Besides that it was fun to play.

Hey thank you for playing!! Yeah, it ended up being really buggy, it's so much better in my mind haha. I'll sure check out your game! :D

This really was a nice idea if it wasn't so buggy. You can go inside walls, the double-tap doesn't work half the time, and I didn't really know what cuased me to jump?

hey,. yeah! I'm aware of all the bugs! I needed a bit more time to polish.. But hey, it's playable and it felt stupid no to submit it! . As for what made you jump, it was the color. When you turn Green X makes you jump! That's my plan for extending the ammount of things you could do with the key

I've created an updated version of the game! https://webox.itch.io/x-postjam if you want to have a better experience on what was my idea for the jam.. By now it only fixes movement and collision related issues. I'll be adding more levels and polishing more rough edges  this week!

One more for the double-tap being a bit jankey, but I do really like the idea and how much you've managed to do with just a single letter. :) Would like to see this explored a bit more.

hey! thanks!! I'm glad you liked it, yeah.. using just one key was harder than I expected.. It consumed a lot more time than I wanted and ended up with too few levels. I'll try to polish it and extend it! :D

I really like this one. I unfortunately couldn't play much because I couldn't get the mechanics to consistently work. Double tapping X almost never resulted in me changing directions, and tapping while green hardly ever made me jump. Lots of collision issues with the walls as well. that said, I love the concept, the design, originality, and it fits the theme perfectly!

Hey thanks for playing!! Yeah, sadly I totally needed more time to polish it! I ended up liking the concept and with a  75% completed game, It felt stupid not to submit it. It's playable at least! :D

It's a very visually pleasing game for something that sounds ridiculous! Creative and fun, nice job!

Such a cool idea!!!! I thought that the whole concept of only using X for everything went really well with the jam's theme! As a game, the collision was a little buggy and the objectives and teaching the players of the mechanics was not the greatest, but it was definitely playable enough to be enjoyable and really fun to mess around with for giggles. I really thought that this game was really creative and impressive for a 48-hour marathon!

Thanks!! I know, I needed more time to polish !! I missed like 6 hours on saturday so I guess that's where my polishing went.  At least I'm happy that I managed to submit something playable haha. Thanks for playing!