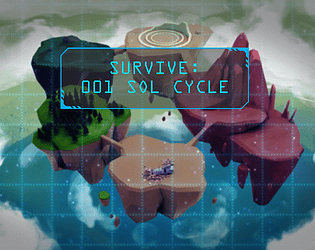 I'm impressed you had the time to put this kind of game together in 48 hours, actually.  This is no easy task.
Would love to see what it would be like with more polish, now.

The core loop is simple but the attention put into the progression and amount of content in that game is amazing for a jam project. Well done !

I loved the turn-based combat and a huge number of upgrades, nice job! Despite tiny bugs (like the crafting interface stuck for a little bit after the crafting is done, or the card descriptions being cropped out of the screen), it is really captivating game to play :)

Lots of effort put into this.  Thanks for sharing.

This game is incredible visually! Love the assets used and attacking had lots of juice to it. I've been meaning to get into digital card games like Slay the Spire lately, so it was a timely game for me too. I do feel like the 0 cost cards make the game a bit too easy, however it was a very fun game overall. I like it!

Wow ! I'm impressed by the effort you put in this game for only a game jam scope !
With a little bit of polish it will actually be a really good game :
- Adding sounds feedbacks in fights will make it more enjoyable. Some particules effect will be cool too.
- Making the character actually walk from one fight to the other (on the map) will make the game feel more realistic.
- A little tutorial will not hurt to be honest ! Just to explain that enemies will get stronger if we heal and forward the time ?

Good job anyway ! You have a good prototype to work on :)

Submitted
The only NeOne
LikeReply
feofentovSubmitted1 year ago(+1)

Not bad for card game made in 48 hours) Reminds me of Slay the Spire. Unfortunately, it doesn't fit the theme for me.

It's  a pretty interesting card game and I'm impressed that it's a card game which was made in 48 hours and it's amazing.

Submitted
One Spear, One Kill
LikeReply
Infernal SpiritSubmitted1 year ago(+2)

The quality of artwork and the ambitious task of taking on a card game for a game jam is quite impressive. The focus on resourcefulness is a really good aspect in any card game. It reminds me a lot of slay the spire.

Wow, this seems like it took A LOT of effort!! Making a card game for a jam is a huge risk. I'm not sure what was your take on the theme. When I was playing I was thinking about, what if you could only pick one card?  Of course it'll take a lot of time to balance but it could be cool! Really amazing job

WOW! This looks amazing, especially for something that was done in 48 hours time!!! There were a lot of different things as play with health, strength, crafting, and fuel cells which all worked together to make the game very interesting to play and kept me interested-- enough to play through multiple times to see all the different cards that could be played. I could definitely see the though that was put into the variety of cards that a user could acquire and as someone who likes strategy games more than reaction/action based games, I thoroughly enjoyed this game. Thanks for making this :D

For just 2 days this is actually very impressive, you have a card base combat system, a crafting and upgrade system, and a basic map to explore. If there's sound effect you could really sell this game for sure!!

This is an absurdly impressive amount of content and UI work for a game jam game! A large variety of cards, pretty responsive crafting and card usage controls, and a nice upgrade system. Well done on the content creation front!

We lost our first run before learning how to use the energy cells; you have to upgrade from the bottom most row first. The second run, we got to an absurdly powerful state. Just like in other deck builders, say no to skills that don't fit your build. Our final set was just loaded with some Strength increasing abilities and cantrip-y feature type abilities. By the time the final fights came around, the character was unstoppably powerful; very similar to how deckbuilding dungeoncrawlers can end up. While the game can be rough around the edges, the fact that we got drawn in enough to play through twice tells you something!

The adherence to the theme is a bit rough; you have Only One day to survive is a good theme, but not reinforced much in game. There's a numeric clock up top ticking up, but perhaps some popups to say "you only have X time left" or somesuch. We think the screen darkened a bit and the encounters got a little more difficult as time went on, which is definitely in the right direction for reinforcing the theme. Overall, great game!

Submitted
All I Need Is Explosion
LikeReply
GarudaDeveloper1 year ago

Really appreciate this review and the time you took to play the game.

Glad you were able to build a cool deck and feel the endgame power. Adding cantrips was my favorite.

The theme criticism is very valid and I wish I had more time to reinforce it.

I really loved this game

There were some UI bugs but nothing important.

Thank you for making this game!

Its like slay the spire. Not sure how it fits with the theme though.

Yes! Heavily influenced by slay the spire which is one of my favorite games out there.

I wanted to try mixing a less than standard genre with the theme "Only One". I decided on card game, but it was hard coming up with the tie-in. A deckbuilder or card game with only one card didn't sound interesting enough.

We decided to interpret it as Only One Day. With the idea being limited time would give players more interesting decisions. You would need to choose between hunting certain animals to get synergies, fighting for fuel cells, or returning to the ship to craft vs crafting new cards outside. However, I wish I had more time to work on these points :(

Thanks for the feedback Tomo, hope you liked it