Help Rover jump, hover, and blast across Mars and it's moons!
Submitted by Jahwffrey — 1 hour, 27 minutes before the deadline
Add to collection 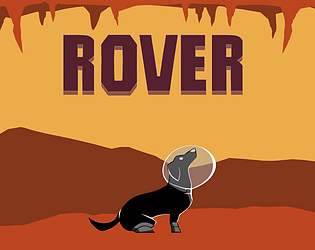 I liked the concept, as it fits the theme so well, but the controls were so difficult. I found some of the jumps required spamming what I thought was the right combination of buttons until I executed the move I wanted to. I made it to the third level, but having to wait for the moving platforms to get into position, combined with the unforgiving controls, made me throw in the towel. Something I found particularly difficult was having both my movement and the direction of the projectile tied to the same direction control. For example, I'd jump to the left and up, and wanted to shoot down and right to boost myself in the same direction, but ended up just moving myself in the air. Having the bullet direction tied to where the mouse cursor is would provide much more intuitive controls I think, although would obviously require modifying the puzzles. Having time slow down while you were in the air would also help when trying to make particularly tricky jumps.

Cool game but the controls felt off. I like that walking and shooting has its own melody

Really good idea !
I can say that because I work on the game that use "kind of the same idea".

It's a bit tricky to play ! I finish the first level but when reaching the second with yellow blocs I couldn't make it past the first room. I was satisfied when I completed each level but that last one (I played) got me !
By the way the dog looks adorable.

The idea is fun, but I really could not make the controls work for me. I admittedly didn't make it very far; not even past the first room. The J Jump just would not align for me and I left not sure what I was doing wrong.

There are definitely rough spots, but also things I enjoyed. Doggo games always get +1 point in my book, and doggos with rocket boots never hurt. The way the music changed with my inputs was fun as well, and did a lock of work in lieu of traditional sound effects.

Thanks! I know the controls are rough, but you know 48 hours and all. If you're still interested, how to get past the first room is described below the game if you feel like giving it another go.

Hey! Cool concept overall, but the controls are giving me some trouble to deal with. I still can still the potential! Good job :)

We did a "similar" game where you can only press each input once, but without platforming and more puzzled oriented, if you want to check it out: https://dzamani.itch.io/the-only-neone

I loved how the music changes when you press a button, but the controls are a bit finicky. Maybe instead of J, K and whatnot you could use the spacebar and shift.

This is a really neat take on the idea that you've implemented pretty well, though it might benefit from the extra explanation in the description that you can hold the keys. :)