Created in 2 days and our submission for GMTKJam 2019 ( #gmtkjam )
Submitted by Late Panda (@latepandastudio) — 57 minutes, 9 seconds before the deadline
Add to collection 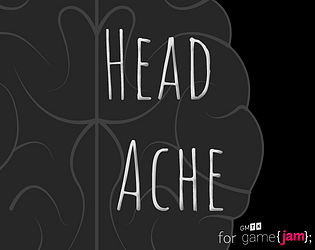 A really neat concept in a very concise and well done game! Great work!
Nice to see a game with some narrative as well!

Thanks, we wanted to make something narrative based that fit the theme, it was tough :/

Well you did a really great job <3

Submitted
Only One Minute Again
LikeReply
Late PandaDeveloper3 years ago

Like it a lot, nailed the theme and the concept is really unique, the 1 man RPG gameplay was really good.

Thanks, very kind of you to say, glad you gave the game a try.

I loved it so much! The story feels kinda relatable, and overall look and feel is great, nice job :)

Glad you played, now I feel bad that it is relatable .

I hope you have the support network you need for any troubles you may experience.

Don't feel bad! The game reminded me how important it is to stay positive, persevere and keep hope in the face of trouble.

AH! Then I feel much better, just thought you related to the  struggle to overcome rather than the act of overcoming itself but I'm glad to hear it is the latter :D

This was short but nice! Two different game mechanics and a story on top but still makes sense, and all together in 48 hours is quite a lot.

Thanks, that is quite the high praise there :D

I don't know which engine you used here but it looks like a lot work for two days :)

RPG Maker MV, which took a lot of the work off our hands.

If you never used it before I would recommend giving it a try, this was our first time trying it and we enjoyed using it a bunch.

Interesting Idea. The boss was pretty tough, but I guess it was supposed to be like that.

Yes it is, thanks for playing.

I like the idea, neat, fun and well polished. Nice work.

Submitted
One Spear, One Kill
LikeReply
Late PandaDeveloper3 years ago(+1)

Thanks that's nice to hear, I've got your game on my play list as well.

Should be there soon :P

As many other people have already noted, it is nice to see a story driven game on the jam for refreshment. It was neat in its art design and pace. Only nitpick that I have is that the furniture puzzle was a bit junky (the furniture was sometimes unresponsive and the bed broke in half like Scott's mind)

Submitted
Where is my 2nd dimension, gentlemen?
LikeReply
Late PandaDeveloper3 years ago

Yeah the bed caused a lot of issues during development, still not managed to work that one out post jam :D

Still thanks for the feedback, there are a few issues we want to fix with the furniture room based on the feedback which will have to wait til after the jam but I am glad you enjoyed it.

I like the idea, I thought it was original =D I think that customized assets would have given the game a little more personality, but I understand that in 48 hours it's not easy. A nice little experience :)

Yeah we were going to have an original character sprite but we did make some of the assets used in the game, but we stuck with a similiar style to RPG maker assets.

It was easier to make a sprite with the generator and due to the time we thought it best to cut corners.

I finished it but im still confused. So the idea is about doing repeating stuff and keep trying until you succeed? I was looking for a visual indicator that i made progress, but alas i reached the end.

The idea of this game is that the story is up to interpretation, the visual indicator of progress is meant to be the wall but regardless we are glad you gave the game a try.

I felt like I was in a Twin Peaks episode. Head trip of a story (in a good way) and easy to understand mechanics. Thank for sharing!

Thanks for playing, I'm glad you enjoyed the game.

It's nice to see a story driven game, not too many of those, and a good one too! I enjoyed it. Managed to get the desk stuck in the corner the first time since I didn't realise what I was doing haha. It was good fun!

Awesome, thanks for that message made the crazy weekend very worthwhile :D

interesting concept. Even without tutorial I can understand what to do in your game. Also, Your game seems to use the RPG maker to complete it. I likes that game engine~

Submitted
The only
LikeReply
Late PandaDeveloper3 years ago(+1)

Thanks, glad you managed to get through it easy enough without tutorial. That was part of the theme of the game as well we wanted people to feel just as lost as the character.

Indeed this game was made in RPG Maker, we wanted to make a project in it as we have never used it before and wanted to test its abilities. It served us very well in this case.

Yeah. I also used RPG maker before. I shared you two RPG maker youtuber which Helped me lots. First one is offer the plugin. Another is the artist offer sprites for RPG maker. (Might be he already subscribe to them). There are amazing and help me lots.

Thanks, I did see Yanfly on Youtube when I was trying to get help with some things but thanks for the artist that will help.

You are welcome. That artist keep making sprites match which  match with the RPG maker requirement for several years. He/She also Have one account on itch website. Many sprites for free.

I like the story on this one. Pretty serious situation.

If you have a chance to give my game a rating I'd appreciate it:

Yeah, we wanted to handle the story with kids gloves but figured its best it gets handled in the way that is respectful while pulling the players attention to it.

I really like the story of the guy trying to fight his own doubts haha. But the design was okay, there is not much you can do mechanically other than what you already did for the game. It might be my personal taste in games but I found the gameplay to be just okay.

We wanted to focus on a narrative tale, didn't have time to allow players to go off the rails and have more free-roam but the restriction of the player is meant to be part of the narrative tbh.

Yes for sure, I understand how the player is going in circles again and again.  The narrative is well written!

Thanks very much, I'm glad everyone seems to be understanding the theme of the game at the very least.

Nice, round based combat. Haven't seen that in this gamejam before. Cool game.

Thanks, just wished we had more time to work on that battle feels much more lacking compared to what we wanted.

Not many story driven games out here, this one is cool.

I would add more sounds effects, camera shakes and other things to improve the immersion and make it really feel like we are inside his head.

Submitted
The only NeOne
LikeReply
Late PandaDeveloper3 years ago(+1)

Yeah sound effects and music was the last thing to be put in, due to time restrictions we really focused on gameplay.

It may be related to the theme story-wise, but certainly not on game design. Maybe you could've battled Nega Scott several times, and as you learnt moves, he would too (or choose advantageous moves, like Gary on Pokémon), making him an interesting villain. Kudos for trying something new for you under the pressure of a game jam.
Check our game! https://cerosware.itch.io/one-stick-shooter

We wanted to have that end battle much more complex but ran out of time for it in the end. Our initial idea was to have a three stage fight with Nega Scott which would get progressively harder and involve much more dialogue between his negativity and himself, trying to get through it and the mechanics of the fight would differ based on what options you pick during the dialogue.

Also we wanted to create a game specifically using narrative rather than gameplay  because it seems like everyone here has done the latter, and we wanted to be different.

I'll add your game to my list, trying to get through as many as possible using my forum post and comments here, so there is a good chance I'll get to it tonight.