Thanks for playing it, and cute little LP.

Nice Game, I did a similar idea.

Nice work on the game, we pretty much had a similar idea.

Sorry for the very late reply, I just only now found out now you posted this message. Honestly, not sure what tips to give other, you always need to take peoples opinion, your not gonna please everyone and you need to be open to always improving your skills when developing games.

Not sure why ether, it might be your PC specs don't hit the correct requirements to properly run the game.

About My Project: So about a month back I released a Survival-Horror on to a couple of game sharing site, the game was developed by myself in 60 days with only using Assets that I had on me or that I could get for free on the web.

It's a short survival-horror game, where you're a Scientist controlling Human Test Subjects to help you try and escape a bunker overrun by a hostile Entity. The Game can be viewed as a hybrid of Classic PS1 Horror Games like Silent Hill and Resident Evil and modern horror games like Five Nights at Freddy's.
https://olinkalex.itch.io/the-possession-experiment

Due to the response I got from this game I am now planning on developing an expanded/spiritual successor to the game. the spiritual successor will be a much larger game with a deeper story and lore, original enemies, and some new gameplay mechanics. What I am hoping to do is forming a team that can help develop a bit of an updated version of my original game, and use that to help promote a Kickstarter campaign along with getting a Grant from Epic Games. and if the project gets fully funded I would use the funds to fully hire my team to help fully develop the spiritual successor of The Possession Experiment, this is a first attempt I'm doing so some aspects of this plan project are still being worked on, but if your interested in being a part of this project. Message me on here or on discord olinkalex#1162

Any issues on using assets or using a game you developed in the past as a bases to help develop the game for the JAM?

I am looking into it, I only have a PC.

Thank you, and I wish you luck on your YT channel

Thank you for the feedback, Though most of the issues you mention are more of your not into Old-School PS1 Horror style gameplay, or things you overlooked.

- Tank Controls are known to be slow and the game gives you a quick-turn function to quickly make a 180 turn. Also in the games Settings menu you can change the Movement Controls from Tank controls to Analog controls. which lets the character instantly face/move in the direction you point the analog stick (WASD Keys) towards.

- The Entity will stop chasing you, but only if he looses sight of you for a good amount of time, so you can't just enter a room and the entity just gives up, you need to keep running though a few rooms for it to finally looses you.

- While yes while you can't view the cameras on the right monitor, the Room Numbers on the Map Glitch whenever the Entity is in said room. This is mentioned in the Hints -&- Tips page that is on the left monitor before you start the Experiment.

So can't say that any future update I make to the game will remove the issue you might have cause they are a staple of Old-School Survival Horror gameplay that might not be your cup-of-tea.

After 2 Months of Development, my new horror game is here.

Yeah I realize I should of added something like Door handles on the cabinet, and I have an update prepared, but of course I can't update the game during the Jam judgment so for now I posted that screenshot to help give the hint.

Yep, realize that I should have made it more clear that it was a cabinet, sadly I can't update the build till the GameJam is over so I added that image to help a little until the GameJam voting has ended.

No the cabinet in the shelter behind the station. It looks like a box (should have put handles to make it more clear its a cabinet)

Thank You, can't say if my next game will let you open every cabinet, but hopefully I can give the place a good amount of detail to make it look the place was lived in.

Didn't have much time to play the game, but it seems solid

Pretty good game with nice art, didn't have much time to really play it.

I guess it works, but unless you know how to do Morse code correctly (by timing) your not gonna make much progress.

It was alright, just had some difficulty understand what I need to do. Art style was interesting.

Alright little game, didn't understand what I needed to do at first, but was able to figure it out soon.

Thanks, yeah didn't had enough time to improve on the typing mechanic. 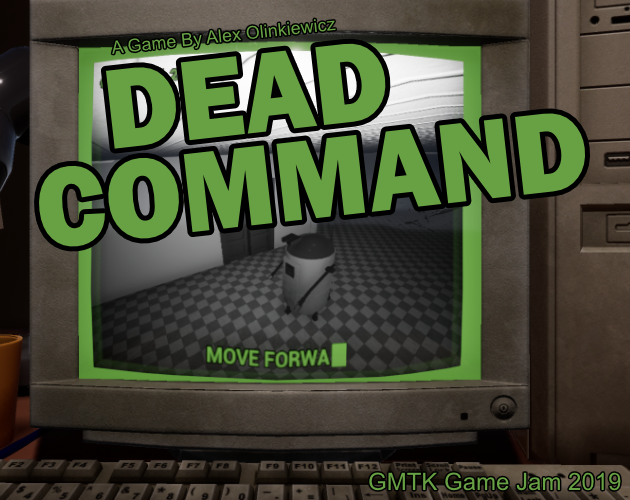 Reply
GMTK Game Jam 2019 community · Posted in Let me make a joke / meme about your game.
olinkalex330 days ago

Yeah actually, but want to do a different take it. still retains the Security Cameras and controlling the Robot, but remove the Text Commands and instead going to control the robot a different way

That was interesting, kept die to soon to really get into the game, but that could be I didn't fully get the rules or something. Overall a nice one.