Made for GMTK Game Jam 2019. A horror adventure game where you control a robot through one text command at a time.
Submitted by olinkalex — 3 hours, 34 minutes before the deadline
Add to collection 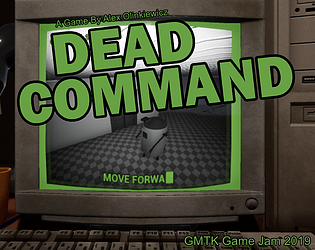 I really love the idea, and the aesthetic works really well. Having to type out long commands, and a few annoyances (backspace removing the whole input, not being able to start typing right after the one before) made the game's pace really slow, so I didn't reach the end. A few annoyances aside, I really like this game, it is well presented and a good idea.

I am not brave enough for this suspense...

the controls are definetly interesting! But as already pointed out, some quality of life improvements would be great(most of it was already pointed out in previous comments, what i would also appreciate is a bit of tolerance of mistyped letters) The presentation is extremely well executed. Overall good job!

Thanks, yeah didn't had enough time to improve on the typing mechanic.

I'll be real with you, I hate horror. But this was good. I'm glad to report no jump scares (that I found...), but I will report heightened blood pressure. Especially towards the end, I felt like I wouldn't make it, was typing commands as fast as I bloody well could. Some of the commands were unnecessarily long, and it would've been cool if you could unlock command shortcuts, cos I got really sick of typing move forward, move forward, move forward, so much so, that I used 'move back' to save a few characters. Maybe instead, the command could accept 'move forward 3' to just repeat the command three times? Other than the repetitiveness of retyping the same commands, the game did really well!

As a horror fan, I`m glad to add this to my collection.  Good job!

That was super creative, and impressive. You did a great job here. I was compelled to continue. Nice work!

If you have time to play and rate my game I'd appreciate it:

Great atmosphere!
It's really stressful watching this screen on the screen: I felt like i also needed to be wary of what could happen where the human was, and I liked that!

Interesting game! Congratulations on making this within 48 hours, you done very well! xx

If you haven't yet, I would really appreciate it if you check out our game too!
(-Amy)

Submitted
Only One Recruit
LikeReply
olinkalexDeveloper2 years ago

Thank you, Thank you

I absolutely love a good horror game and for some reason you had me tense throughout. I didn't want anything to happen to my little robot!

Managed to make the antidote in time though so I've got to say you nailed this project on the head.

If you are interested in Tower Defense, check out our game. A tower defense where you can control only one tower at a time.

Interesting game! I wish you could leave the command list and map overlay open while you are moving though. It says "command accepted" but nothing is happening until you first type "close".

yeah, did had time to program each command to not say accepted when the Map/Command List is Open. Anyway thanks for playing.

Your idea is good and you execute it well!  Your game reminded me of FNAF combined with me feeling like a hacker! Fun experience all in all. Good job, I can't believe you did this in only 48 hours!

I would love if you checked my game too, if you haven't already!

Thanks, and played and rated you game

This game is very well designed and polished! Love it! The atmosphere is on point, the animations are superb, the sound effect are good, just wow! 15/15! The only minor think that bugged me first "move forward" was long to write, resulting in me using "move back" to go forward, also the time "command accepted" or "command failed" is written on screen is a bit long and sometimes when I knew what to do, I would write faster the next command, but I wouldn't be able to because of the "command accepted" text :) Apart from that, this game is mazing! Great job with it!

Would love if you could check mine out too! Or not, no pressure ;)

Submitted
Lightless - Only One Light
LikeReply
olinkalexDeveloper2 years ago

Thanks, and did play and rate your game as well.

This game is really unique and cool. Loved the atmosphere, the concept, it's hard in the right way! Every part of it was well thought.

Submitted
By The Blade
LikeReply
CactusSubmitted2 years ago

Really cool game! I really enjoyed it! Very atmospheric, and I love the style of the security cameras. I felt very immersed! Well done! The (level) design of the building is very good, and I loved the sickness effect of the blurry screen! Really cool concept, and really impressive for a jam game! :D Keep up the amazing work! :)

Also thank you for posting on my topic :)

Thank you, glad you enjoyed it.

Nice game, very peculiar and well made. I enjoyed playing it. However, there is the problem with a command list. You can enter commands for the robot while it opened, and they'll be accepted, but nothing will happened.

Submitted
One Spear, One Kill
LikeReply
olinkalexDeveloper2 years ago(+1)

Thank you, yeah didn't had the time to program to tell each command that there not accepted when the Command List and Map are open.

Wow I really liked that atmosphere! Interesting concept with the remote control mechanic! I was getting some real Resident Evil vibes! Great submission!

Good game, I felt as i was inside

I think the method of controlling the robot works really well, and really enjoyed forming a mental map of the area! I do wish it was easier to type the commands, like shorthand two-letter abbreviations or even being able to use backspace to clear a single character instead of the whole word.