One room, one minute, one nightmareView game page

The only thing you can do is run. Escape from your nightmare. You only have one minute.
Submitted by Alexey — 3 hours, 32 seconds before the deadline
Add to collection 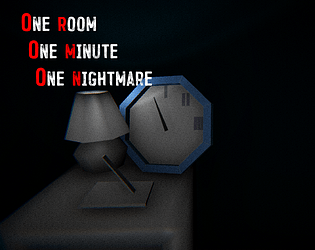 One room, one minute, one nightmare's itch.io page

Sorry about taking so long to rate back, this was a good game.  Serious SH 4 vibes at time.

Stuck on 3rd level, manage to get until cupboard fall down. Tried to put all combinations of numbers but failed. Have no idea what to do next. I saw the arrow at ceiling, but have no idea what it is for.

I love a good escape room. Very good feel you were putting off in the room. I kept expecting some kind of jump scare.
I especially enjoyed the door slamming open after you get the key. Gave me a good laught.

Good job, that was tons of work for 48 hours.

Great atmosphear and nice, elegant mechanics! Very uneasy feeling, I like this! A little bit like my own game.
It's really great how you convey horror without jumpscares - for example the appearing lamp is brilliant!

The controls are a somewhat rough, but thats just polishing. :)

Hey, cool game with a claustrophobic feel. It's a great example of how to create a dense atmosphere with few graphics.

Here are a few things I stumbled over:

1. Collider for picking up the keys or interact with objects were a bit to small. I really had to exaclty hit the door knob or the key to interact with it. So it was a bit unclear from time which objects are interactable.

2. It is logically a bit inconsistent that I first have to pull a knob and then am able to move the doormat. Those are things that could be done in any order. So the puzzles distracted be a bit from the overall good atmosphere.

If you want to, please check out my game. It's a cute and handrawn strategy game also with a little horror touch maybe ;) 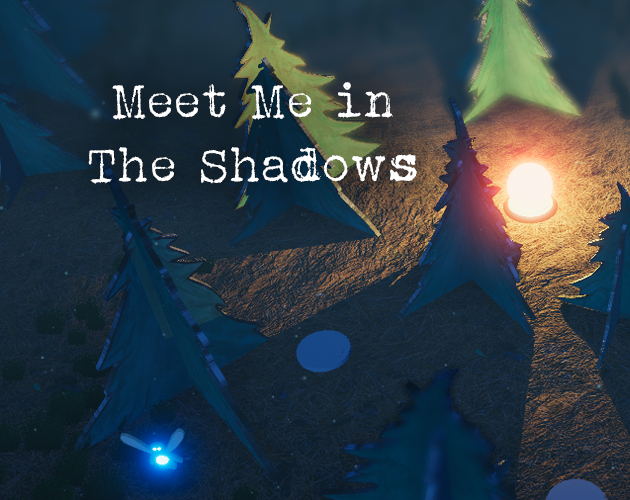 Submitted
Meet Me in The Shadows
LikeReply
AlexeyDeveloper2 years ago

Thanks! Rated your game too!

Small, but cohesive game with trivial but fun puzzles. It's a good proof of concept, but it desperetly needs more complicated puzzles.

Submitted
One Spear, One Kill
LikeReply
AlexeyDeveloper2 years ago

Thanks! I think if i had more time, puzzles has been more difficulty.

Very interesting idea! The horror vibe is indeed achieved very well. The sound are crystal clear and perfect adding to the tension. The two levels, in my opinion were a bit but I really like the third one as it really felt like a puzzle. The character controller was a bit slow but I guess it added to the 'horror' vibe. Great game overall! Great job to you!

Submitted
Lightless - Only One Light
LikeReply
AlexeyDeveloper2 years ago

I thought it was good and Im 100% NOT a fan of horror games. Thankfully there were no jumpscares and it was just suspenseful. The puzzles just kind of felt like clicking on everything until the door opened but the last room was a good puzzle where you have to think back to the last two levels to open the door. I like it!

I like the audio, for the most part. The only problem I see with it is how much gets repeated over the course of one playthrough, including the repetition from Kevin Mcleod's piece which I think is mediocre for a horror theme.

For the rest, I think you should consider context more when trying to build horror, and you really should avoid a time limit for the types of puzzles you used. The first one was basically just click the things in order once you've found the next thing the game arbitrarily allows clicking on. The second one was only different in that the things moved after one of the clicks. The third is certainly a different type of puzzle, which is good since it means your game isn't just repeating the same things over and over, but it was a puzzle so obtuse that even beating it gave me no understanding of how it worked. (I got an iteration with 1, 1, 2, clicked once, and somehow it was solved?). In every case, the reason for the clicks seemed to be purely just what you thought the player character would look at next with no connection to what the character would be afraid of.

Consider this: how would the situation of your game feel for someone who really likes room escapes? My guess is it would be awesome, thus not scary at all.

Further, I think the fact that I had to repeat the action of checking the door knob before I could check the next thing in the first stage killed any chance of horror. The repetition made the in-game actions a routine.

Firstly, thank you so much for playing and spending so much time to make feedback!

Regarding backward remarks, I can only justify myself that on the second day of jam I did not have a clear plan. A room and furniture were created, a more explicit connection with the theme of "Only one" was needed, so the clock and the minute appeared. The whole logic of the movements of objects related triggers was ready only by mid-Sunday. I didn’t want to have one room at all, so I created two others in a hurry.
Regarding the third room - there is an order of numbers from left to right, the first digit on the chair, the second on the cabinet, the third on the wall.

Feels like a proper horror game! I was super scared playing it, great job! I feel like the controls could've been more fluid and fast, but in a way, I feel like that's good for a horror game, to have slow controls, sometimes it got a bit confusing, but that's the challenge of games, am I right?

Submitted
Only One Recruit
LikeReply
AlexeyDeveloper2 years ago

I took a little time to control setting, made only one change, he stopped walking like in a swamp :D

Thansk for feedback, glad to you liked it!

I enjoyed playing this game. Full of tension. I fall in love with the effects and the reeverbs. Truly, the atmosphere caught me. Congrats for this masterpiece.

Thank you very much, glad you liked it! :)

Awesome horror game, I really loved the atmosphere and the attention to details such as the small screenshake when the clock ticks. I just felt a few puzzles a little too random, but it's a jam entry so that's understandable.

That's a different one, congrats on the horror game.  Cool idea!

Very cool little horror game. I like the atmosphere created by the clock ticking. I felt some tension. Good puzzles. I only wonder what would happen if the time runs out but at the same time I don't want to see the answer myself ;) Good job!

Thanks! A little miracle will happen -> full restart :| ...  :D Use the bed to restart only one room, not all game.

The atmosphere of this game is amazing!  The clock ticking and becoming increasingly loud really made me feel pressure to hurry up.  The only complaint I would have would be that some of the puzzles are a bit illogical (like knocking over the shelf only after the lamp is lit), but that could easily be fixed.  Nice job!

Thanks! In next puzzle-horror game I will consider, thanks for the feedback!!

A nice use of only one level ,it was really scary , it could be a very cool horror game .

Submitted
IT'S MINE
LikeReply
AlexeyDeveloper2 years ago

Really well made game! I'm not usually someone who plays horror games, but I liked it! It was intense and scary and well put together and polished! Good job!

I finally got around to playing your game, and it's one of the highest ratings I've given so far, way to go! I really felt panicked, very effective and intense emotionally. And thanks again for playing Einnsámr :)

Wow, thanks! Glad to hear that!