Meet Me in The ShadowsView game page

Meet Me in The Shadows's itch.io page

Ranked from 95 ratings. Score is adjusted from raw score by the median number of ratings per game in the jam.

Hey there, I played through some of your game in this video at 9:15

Hey! Thanks for playing. It's always cool to see others play the game. So the issue with the pathfinding finding is really a thing :D
I will continue work on this.

The idea is very good, the execution is even better. All the lighting and  the hand drawn decorations gave the game an unique feeling. I only played the jam version, but saw that you also have a hardcore one, which is great, because the levels were pretty easy.

Submitted
Where is my 2nd dimension, gentlemen?
LikeReply
Farry1Developer2 years ago

In the hard mode the detection radius of the light orb is basically larger and the maximum path length of the fairies is shorter. Balancing those values was quiet difficult. So it's cool to have so much feedback now :) Thanks for playing

Submitted
The only
LikeReply
PuffPastryPrinceSubmitted2 years ago(+1)

Very cool game! The setting is so nice, I wish I had a model of it or a story book for kids. I think with a few more levels and mechanics this could be a full game. Like ways for the fairies to interact and create shadows.

I thought this was a really fun game to play, could do with more levels and varied gameplay in later scenes but regardless I thought the game was fun.

I did think that it would be better if the enemy light would constantly move rather than wait for it's turn but still leave the player restricted to the distance they can move. But that is just my thoughts I think it works the way it is but I would prefer a more active enemy to avoid.

Looks amazing by the way, very well done on the artwork, would give you ranking for that alone but unfortunately we are meant to focus on design rather than artwork. You did still have solid design, but the artwork is something else :D

Good work, the idea is brilliant and the graphics, music and art in general is outstanding. The execution isn't the best, sometimes two areas seem to have the same amount of light and one of them is lit and the other one is not.
Anyway, a part from that is a really good concept and game, please keep working on it.

Wonderful work on this one! The art and feel is beautiful and the gameplay is nice and simple. It's maybe a little too easy, the first two levels didn't really have any difficulty at all the third level took me a few tries to get it right. Although, I see you also made a hard mode. I'm sure with more time you could flesh this out into a solid strategy puzzle game. Definitely awesome work technically :D nice one!

Thank you for playing and your feedback. You're right, some levels might be too easy. But I wanted to slowly increase difficulty and then polishing took me so much time that I rather went for 3 polished levels than 6 which might feel bad designed.

But thanks for playing and thanks for watching our stream yesterday. I might come back to your game again later and see how the resting place developed :D

This is a really nice game! The first time the light moved the sound actually scared me a bit haha, it's a really good sound choice, really gets across the danger of the light. Having to actually go and revive some faries on some levels as the main goal was good too - forced you to 'play' more rather than just hide around the edges. You should be proud of this entry :)

Thanks for playing. I'm happy you liked :)

Your art is fantastic! I really like the theme, often in light based games there are scary things in the dark or you are hiding from guards but I think your world is a really nice take on it.  It took me a wee bit to work out what my controls were and it would be helpful to see some kind of radius or feedback on exactly how far the fairies can move but I think it is a nice, polished jam entry. I hope you continue on with it post jam!

Submitted
It only takes one
LikeReply
Farry1Developer2 years ago

The visuals and music (especially the sound effect when the light source moves) are OUTSTANDING! The concept is also nice, but there is a problem where sometimes it looks like there is no light in a place but I still can't move there (even with the graphics on ULTRA).

You can easily improve this, so I will follow as I'm excited to see where this goes!

Hey! Thank you for playing. I will will put more work into proper pathfinding and better raycasting :)

The visuals and sound of the game are really nice, however I thought the gameplay wasn't very engaging. At the start I didn't understand how to move the fairies, I just continued pressing skip my turn for two rounds. However after I figured out the controls I felt like the game became trivial. If the light came to close I just had to wait a few turns and then I had a clear path to other fairies. The game also felt slow to me (if you were going for a zen game this maybe isn't a bad thing). The path prediction looked really good, but it would probably be better if it would still show how far you can move even when you exceed your movement (like a combination of white and red path).

Thanks for playing and your feedback. I'm already aware of this. I'm thinking about a sort of timer mechanic so you have to end a stage in for example 5 turn or something.

So, I came here to check if what I had to say was already said by the other commenters, and they were. However, I then noticed the screenshots, specifically the highly noticeable shadows in them.

This is what the game looked like on my screen, scaled down to not waste space: 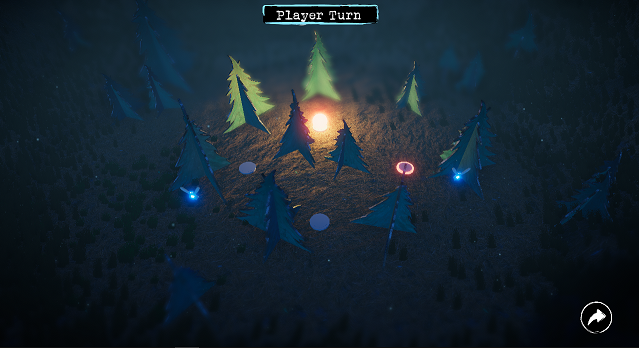 I had an immediate problem trying to tell how the light mechanic worked, because it didn't seem like there were any shadows to hide in. Was this perhaps a bug?

this might be because of your graphic settings. crank them up to maximum. Then you should see real time shadows

Very original idea! Beautiful aestetics!A bit hard to understad at first but... Great job with this!

Submitted
Lightless - Only One Light
LikeReply
SimpleTeamSubmitted2 years ago

Nice game ,with beautifull aesthetics , just a little hard to understand ,but it could be easly improved :D

Submitted
IT'S MINE
LikeReply
Hugimugi7Submitted2 years ago

Damn, this must be one of the most unique games I've played in this jam, great job! This has the structure and building blocks of a real game!

Great selection of sounds and fonts! The way light is made is amazing, so vibrant!

The movement of the fireflies is a little unpredictable, they can crawl out too much due to shelter when avoiding an obstacle. But in general, everything is very cool done!

Submitted
One room, one minute, one nightmare
LikeReply
AsueSubmitted2 years ago(+1)

I really liked the aesthetics of the game, the choice of the font and the music. The atmosphere is particular, really well done. I think it misses an indication on where the character can go. I see potensh in the game if you improve the existing mechanics or if you add some =D Good job !

The game looks and sounds great. I wasn't really sure what are the rules of where fairies can move not to end up in the light next turn. There were moments where I was sure I would be hidden in the next turn but wasn't, and there were instances where fairies looked like they were in the light, but I guess weren't?

It's a nice and quite polished game but as puzzles go, for me it was a puzzle of how to move 1 fairy and keep it alive (because others revive when you're close to them).

EDIT: well it seems this is a second comment from us because one my other team members already played it and commented on it.

Thanks for playing and your feedback. I will work on the UX and make those things clearer when I continue developing this :)

Hi! I liked the art style and sound design! The light-movement sound was my favorite, so ominous.

I really would have liked some harder shadows cast by the trees to better indicate when I was in shadow, and when I wasn't.