A game you have to play with only one hand.
Submitted by jiggly joe — 12 hours, 31 minutes before the deadline
Add to collection 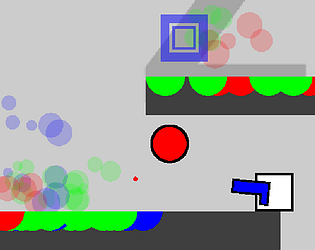 Ok I see what you were going for and the game is hella hard that way. Unfortunately I don't have the will or the time to master it. I've been trying for some time but the moment where the two boxes fall from the top platform at once is just too hard for my level even when I try to recoil myself left to avoid the place they'll fall onto. After that I just gave up and played with two hands to see what else is in the game. And what I found out is there's no way I could finish it with one hand. It's quite an original idea but it might put off a lot people. But I suppose you're going for hardcore.

Even though the game is about boxes, shooting is really juicy.

Really clever idea, probably one of the most unique i've seen. Very hard, but no less fun becuase of that! Really good job, one of my favourites yet!

Really cool game ! Honestly one of the best I've played during the jam (and I played a lot of'em).

DO make a full game out of it and tell me when it's ready haha ! But just one little thing that I have to say (except from OH GOD IT'S HARD AS HELL) is that you can hide yourself in one of the two corners and the ennemies won't be able to touch when they spawn, so you have a lot of time to shoot them before they come back (don't know if it  was a bug or not because the game is still hard with it though).

So I have absolutely no self-restraint, which got me wondering.

Is there some way you could tweak the core mechanics of your game to FORCE the use of only one hand at a time?

Not quite sure precisely what that would look like (maybe you have to hold down an numpad key with one hand or something), but I think it could be interesting to explore.

Firing the gun felt nice and juicy, which was good!

( I'll +1 Adrien's advice below as well, a gentler difficulty difficulty ramp would be nice! )

To do that, here's an idea : just have five buttons (i dunno, q, w, e,r and t ?) which need to be hold during the entire game (and if you let go the game pauses or restarts) so the player has one hand that he absolutely can't move ?

Or just tell the player to not cheat x)

That's not a bad idea, might be worth testing!

If you do test it, just be careful, I think there's a hard limit on how many inputs most keyboards can register at once.

But the idea should still work even with fewer buttons depending on the relative position of the buttons!

Oh my god you're a genius! How did I not think of that! I'm gonna fix this game up after the jam and make it into a full game and 100% I'm using your idea!

Haha all good jiggly joe, during the jam you've got your hands full just making the game in such a brutally short time! We missed so much stuff that was just staring us in the face because we were just struggling to get the darn thing working!

Submitted
One room, one minute, one nightmare
LikeReply
JanegamedevSubmitted1 year ago (1 edit) (+1)

Interesting idea. It's hard enough to pass the level, but it's not bad.

The second level made a splash on me!)

Nice concept, haven't seen anything like that. It is hard as hell though, I didn't manage to finish a level :)

It would have been nice to have tutorial level, and introduce the mechanics one at a time:

For instance in the first level you have to shoot a few enemies so you can see their spawning and move pattern.

In the second one you force the player to change weapon.

In the third one you force him to move.

Here the player has to figure that one all in one go, by dying a lot, and it seems unfair because the rules were all thrown at him the same time.

But the concept and mechanics are great and well executed, so goodjob :)

thanks for the incredible feedback! If I had more time I would have definitely fixed the difficulty but sadly 48 hours isn't enough to make a game and balance it. I really like this one so I'm probably gonna work on it some more after the jam, add more levels, enemies, maybe mechanics, and will definitely take your advice and add a tutorial stage. Thanks again for playing and telling me what you thought! :)

Ive seen games like this before and it played well. i would really have like to have WASD controls so that I could control movement and shooting with 1 hand, but meh, its one way (frustratingly) to fit into the "only one" theme. Hard to get too far, at least for me, as a result. Good submission overall! :)

So i played it without reading the description, and assumed the take was that you had to pick one thing to sacrifice: aiming, movement, gun color changing or shooting. I must say with that perspective it was incredibly enjoyable.

Cool idea! Tricky using one hand! At first I wondered why the controls were so spread out but now I understand! ;-)

Nice idea! Though a "little" too hard for me...

But I had a lot of fun anyways!

I liked how you integrated the main menu with the shooting mechanic. Also liked the animations and sounds, and the fact that you can jump into the hole -- it was a nice twist on the Super-Crate-Box-like game!

I must say I did break the one hand rule and enjoyed the game way more, though!

Submitted
The Only Juan: The Adventures of The Jelly Knight
LikeReply
Beaver JoeSubmitted1 year ago(+1)

Wow. Nice idea of your game. I likes your visual effect on the ground. That's the nice start of your game~Keep going bro. I saw great potential in your game.

Submitted
The only
LikeReply
Yahia ZakariaSubmitted1 year ago (1 edit) (+1)

Oh come on, I couldn't even do it with both hands, how do you expect me to survive with one? I like the theme interpretation and how it expects the players to apply the "hand-e-cap" themselves.  The shooting feels good and juicy. It is a really fun game.

Oh, that was really hard, but a interesting ideia!

Very cool idea! It has exceeded my expectations

Great game. to make it a bit esaier move the controlls closer.  But great game!

It's super hard and super fun!! I really like the idea!
I specially like the detail of not letting the player use WASD keys to move so  that the hand has to reach even further. Nice one!

Yeah I purposely put all the controls as far apart as possible just to make it harder on the player >:) Glad you liked it!

Never thought about limiting the player their self like that! Really cool concept! Pretty challenging! Enjoyed it!