One of each jump. One massive wall. One Goal.
Submitted by FamGamSam — 3 hours, 23 minutes before the deadline
Add to collection 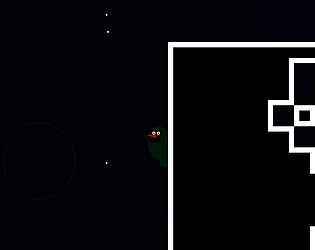 For anyone who may be following this board

I have redone this project and am currently play-testing it, please check it out here:

Alright, I just finished playing and I gotta say this game evolved a lot. I haven't actually finished the game, I'm stumped on this part: https://i.imgur.com/VKYDJxB.png

This looks like something that would fit right in with my collection on Steam. If you someday release this I'll be interested. The sense of humor this game has is also really good. The only problem I could really find is that the way the blue blocks were introduced makes the player think that they are simply walls where you can't slide, but later when they are used in puzzles you actually have to learn that they just push you downwards. I spent a long time trying to figure that out the first time.

Thanks for playing again, I'm excited to hear about your experience with the rest. and your right about the walls, I'll fix that mechanics introduction.

The Game has been released, it's on sale right now so I can get eyes on it, I would love it if you would claim it and leave a review or comment on the page, your help was appreciated in the dev process. if you miss the sale just send me an email and I'll get you a key.

Just claimed it, I'll test the game right now and leave a review when I'm ready. Thank you so much for making me part of this! It's nice knowing that I helped you make this in some way.

I can't believe this game placed so low!!! It's genuinely the best and most compelling game I played this jam.

It's alright, after consideration and watching some people play it in real time, there were quite a lot of un-enjoyable things about it. I've switched gears to working on it instead of the project i was working on. So updates will be forthcoming.

A little frustrating having to do over after falling for the umpteenth time. Personally would have prefered a separate button for the dash (even if just "hold to trigger", after the number of times I dashed without actually intending to)
But that's me, and it's your game (and I'd probably have gotten used to it after a while)
It was hard to tell where to go a lot of the time but that isn't a bad thing, it was fun to explore, the parts I could reach. And when I wasn't dashing accidentally, the jumping mechanics worked quite well
Guess whatever was at the top shall remain a mystery for now~

Hey there, I played through some of your game in this video at around 7:15

wow, it's surprisingly nerve racking watching someone play your game in real time for an audience, really highlights all my mistakes. Thanks for playing!

Really liked the movement, could do with some tweaks but for a game jam it was pretty good! Nice work, I had fun!

Okay, I was planning on playing a bunch of games this afternoon, but instead I just spent like an entire hour playing this. The concept is very cool and I was genuinely excited to climb the mountain and see what was waiting for me. Unfortunately, the controls were kinda messy and I eventually fell so far down, I just couldn't get myself to climb it all again. Well done, though! A very intriguing concept and controls aside, pretty well executed! A bunch of stars from me!!

Thanks for the review! i'm glad it got you so intrigued. I've gotten a lot of feedback from people about the controls.

I agree with you on the wall slide, but the down dash and the H speed would definitely help the game feel even smoother! I'll sure give it a new run once you're got it updated so I can finally reach the top of the Lonly!!

I am play-testing the redone version here if you are interested:

Control were very difficult but I did like the "lonely" them.  Thanks for sharing.

I don't think I've understood the controls, since smashing directions at semi-random somehow made it work for me, but I enjoyed your game nonetheless. You did a splendid job installing that lonely ambiance.
And by the way, I think you deserve credits for working on this game through the end despite writing such depressing things about trying in vain. ^^

Thanks for playing! pretty much everything you read was off the cuff, first draft, make it up as I go kind of stuff. i'm glad you liked it!

Didn't make it to the end.
I like the idea that climbing a massive wall and reading other climbers' Epitaph. It delivers the lonely feeling. And making the gameplay and narrative fit to each other.
But the jump itself was too difficult to me, and I have to say the controls feel a bit werid to me. I make platformer sometimes so I do know how difficult tweaking these move are. But for a gamejam game which want to deliver a message, making it less difficult would be better I think.
Overall, I still like this game, nice work.

Submitted
Only One Way [GMTK JAM 2019]
LikeReply
FamGamSamDeveloper2 years ago

Yeah, my mantra in order to get it as high as i wanted was to not go back and redo areas, so i ended up having only a very small tutorial i wish i had made it longer so people could get a real feel for the controls before shoving the hard stuff in there face.

The window was really small and everything was black so it was really hard to see what was going on. Combined with awkward controls I just kept falling back down to the start. I really like the theme of trying to climb over a massive wall and I think given a little more time it could have been really good.

Thanks for playing! the window size has been a common complaint, not one of my better decisions. a properly paced intro would have been much better too, something to really help the player get how the controls work. I think if you spent a little more time on it you might find the controls are less awkward and more just really really obscure, but fun when you figure them out. (i say this confidently only because that has been the consensus of many of the posts) Thanks again for playing in the first place!

I enjoyed jumping and dashing around! One thing I noticed was that the gravity is very high and it pulls you to the ground way too fast (especially when jumping/dashing from high up). I felt I was not in control during the fall, since I could barely move to the sides while falling.

Other than that, I had a great time!

Submitted
The Only Juan: The Adventures of The Jelly Knight
LikeReply
FamGamSamDeveloper2 years ago (1 edit)

Not being able to control your fall beyond the dashes  and jumps you have was a design decision, but I can see why it's frustrating some people, another poster suggested i give the player the ability to cancel horizontal momentum, then at least you are only falling down. Thanks for even playing at all!

I got up to Mortiosulphiur (second blue dude). Fell really far after that and I was done. I can see the effort you've put into this and I think it's a great entry. I think next time you will have a better idea of programming the controls to be tight which will really add to the game :)

Thanks for the feedback, would you mind explaining what you mean by tight controls? (I actually tried to make them VERY tight, i thought i succeeded...hmm)

Very large world! Makes me want to explore it all! Love the character and the jump dash combo you can pull off! The only thing I would add is a bit of a tutorial! Great game though!

i agree, more tutorial is a must for controls like this.

Great movement mechanics, although i would like it better if I could move after dashing in the air, loosing air control felt restricting at times. But other than that the movement felt reallllyy good! The character on the black background was blending in at first and took me a min to realize the difference but that's just my bad eyesight haha!

Great job! looking forward to what you do next!

Dark green on Super dark blue! come on Sam! what were you thinking!

haha ik everything seems like it could have been done better after the fact. But be proud of what you've made still. It's is great for such little time!!

I like the movement mechanics. The idea that you are a one small character which climbs this BIG wall... It gives you a feeling of accomplishment after you do it :D

Nice going getting to the end! how long did it take?

Did the game just teach me to trust naysayers? Great job on atmosphere and writing! The movement is quite hard to master, but I feel that is exatly the point. Props!

Submitted
The Right Way to Drive
LikeReply
FamGamSamDeveloper2 years ago

I'm play-testing the new version here if you are interested: https://samuelsolomon.itch.io/the-lonly-wall

its compelling ...  coolest thing i saw today... it has great potential.... rated

At first it's a bit frustrating, but *SPOILER* when you realize you can climb on walls it becomes very interesting. I admit I didn't finish it, I got frustrated when i fell back to the start. The movement system is something you should improve to make it more responsive, also the dark background makes the character less visible, but you get used to it. Nice game though

Thank you very much! do you mind clarifying what you mean when you say "responsive"?

It's hard to understand when you can dash, sometimes i can't move right at all while in mid air but i can dash left, or things like that. Maybe it was just a problem of understanding of the movement, in that case i think you could find a way to make it clearer

oh ok, I completely agree, i did not give the player enough to go on, so by the time they get up to a more difficult spot, they still don't get the controls. it's a little silly to expect the player to just stop everything and take time to practice and figure out how your mechanics work.

It is good work that you did it alone!