Submitted by Nui — 2 hours, 30 minutes before the deadline
Add to collection 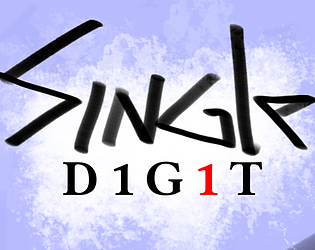 It surely it a fresh tough on the otherwise number heavy genre. I had a good time playing it. Still I feal that the game could be a bit more fleshed out with some more interessting mechanics.

But that is just a bit nitpicky.

In fact I like it quite much and put in into my video about my favorite picks from the jam.

interesting combat mechanic... almost like binary adition without a carry digit, and when the other digits came it it was kind of a math puzzle... well done

Pretty interesting idea for an RPG combat system. HP is a fundamental concept that I would not expect to have a twist! Only complaint is that the combat does feel a bit slow. Being able to skip text or having a speed option would be great for extra polish.

Wow, That's really clever & new way to play the RPG;
The concentration mechanic & digits other than 1 mechanic was really something that I didn't comming..
Quite innovative I must say.

Submitted
The Only Platform
LikeReply
DaViciSubmitted2 years ago

Haha I kept defeating the last boss trying to figure out what mechanic I was overlooking. Glad I eventually peeked down and read the description ^^'

Very very interesting game! I loved how at first the different numbers seemed only cosmetic, and then suddenly they were required for fighting. The last boss felt a bit easy, since he was essentially a 5 turn kill due to the strong "level-up" skills the player gets, and his attacks weren't that challenging. I bet with a little more time spent into fleshing the enemies out would make this gem shine bright :)

The game is very interesting, especially in how it approached the theme

Submitted
If
LikeReply
n00begonSubmitted2 years ago

Great use of the theme. It reminded me of counting in binary. Nice work slowly introducing the concepts since it is quite different to what you are expecting

Submitted
It only takes one
LikeReply
CerosWareSubmitted2 years ago

Clever take on the theme. And it paid off with interesting consequences for attacks and healing. Great job!
Check our game! https://cerosware.itch.io/one-stick-shooter

This is a very original and solid take of the Only One theme.

I have never played an RPG with only one digit, and it was really cool how you designed encounters around that. I also encountered the 'name' prompt organically (I know you have a screenshot included) and I rolled my eyes at that. Cheeky boi.

Cool idea! Maybe a little cumbersome with the 1- Number instead of 1-Thing, but its something to think about and fits the theme. Also, the music is pretty chill :D

A very interesting concept -- unary encoding of numbers is not used nearly enough outside of formal cryptography. :D I also like how you progressively teach players the mechanics before using them as challenge.

Still, I think that the RPG-style battle is not the best visual representation for this kind of puzzle, since all of the gameplay ultimately takes place in the top bar on the screen, as you try to whittle away the opponent's digits. It is also currently very difficult to gauge the effect of selecting certain digits on the enemy's attack effectiveness, so it was hard for me to grasp whether I should focus on defending myself or just on simply erasing the enemy's numbers as quickly as possible -- I chose the latter and won, but I also think that the AI didn't try as hard as it could to beat me.

Submitted
Quest of the One
LikeReply
NuiDeveloper2 years ago(+1)

You're right about the AI. There's none, actually. I wanted to make them, but I didn't have the time, so all the enemies are playing randomly.
I'll think about another battle representation too. In fact, I figured the dialog box on the bottom may catch the player's attention exactly when he should watch the top screen. And that's why I fixed this in a rush by adding the "watch your HP" text. ^^'

Nice concept. And I love the enemy designs! Obviously, there's more you can do with this idea but what you were able to implement over the weekend is great. Good job!

Also, if you're thinking about sticking to your art style, I'd suggest trying out vector art. Vector art stores images as lines instead of pixels, so your illustrations will have smoother lines that can be exported at any resolution. Adobe Illustrator is good if you have it but I'd recommend Inkscape as a great open source vector art program.

Thanks! Glad it pleased you.

As for the enemies' artstyle, to be frank, their sprites are still placeholders. I know very well what vector art is, but I don't plan on sticking with this style anyway. What I really want is more a of sketchy detailed drawing than minimalistic forms and curves.

Sorry for explaining stuff you already know lol. Best of luck to you!

First Turn-based game in this Jam. Impressed with the max Originality. Your game contains strong programming. If you have enough time, you must add more effects on your game I guess. For the graphics, I like your art style and UI design. If you can adjust your left combo panel little big small, It would looks perfect.(I think it would be "LV" instead of "LVL")

Submitted
The only
LikeReply
NuiDeveloper2 years ago

Thanks for you constructive feedback, I appreciate it.
But I really wanted it to be "lvl" and not "lv", actually. ^^

Neat gimmick and I loved the chillchill tunes!!!

First of all: THANK YOU ! You reminded me of my childhood when I was playing the old Pokémon games, maybe a little too much. Anyway back to the comment. I really loved the way you introduced the game as a puzzle, making us think how to defeat the monsters. The mechanics are unique and I really like the attention to details (like the background changes when you change your digit, or the fact you can do "nothing"). There's just a minor bug with the final boss because you can't get past him, like once you've defeated him he won't disappear, but anyway, It doesn't matter. Now, the music: It was so amazing! I loved the epic theme when the boss appears! Anyway I LOVED your game and really hope you'll make a second one, even outside of the jam! GG

Submitted
Lightless - Only One Light
LikeReply
NuiDeveloper2 years ago (1 edit)

Haha, glad I could remind you some good childhood memories. And thanks for your comment.

As for the "hope you'll make a second one" thing, just know it's not exactly my first game.
It's the first one I designed myself, for sure, but I have experience in working as a programmer, graphist and even as a producer. So, basically, I'm used to work for others. But your comment definitely makes me want to do more game design by myself. ^^

This was a really cool concept! I love stuff like this where you have to fiddle with numbers in order to accomplish a goal, feels really clever solving those kinds of puzzles. Got stuck on Myadas though, not sure if that's meant to be the end but once it runs out of health I get a message saying it was KO'ed and then reappears with no health still.

And yeah, as written on the project page, I didn't have time to make a proper ending screen . So it's normal you ended up looping on the last boss. This basically means you beat the game.

This was extremely cool. The final boss was particularly enjoyable, to the point where it kinda made me realize a lot of other RPG final bosses feel lackluster.

I just had this moment where I was like, "Hang on, why the heck don't I have to think this hard (or at all) for most bosses in turn based RPGs.

Thanks! Glad you liked it so much.

In fact, if I had more time to do this, enemies would have been more intelligent. Here, they act randomly, so you "just" have to think about takin' em down.
But imagine what it would be like if you also had to defend yourself, or to make sure they don't heal to an extreme extent using their concentration moves. There would be almost no room for mistakes. And well, THAT's the kind of puzzles I aimed for, originally. ^^

Ooh, yeah that would be great.

That behavior sort of came up organically a few times when I played just due to random chance.

The only thing I'd say to be careful of is making it too puzzly. I think that's definitely one way you could go with it, but there's a lot of space between puzzle with single solution and problem that you have to solve, and your game's mechanics are already quite a mind-screw.

There's something to be said for just being able to play around and experiment to learn the systems, and I think I would have gotten frustrated if the early fights were more puzzly (not saying there's no space for that, but the breathing room was nice).

For reference, I acted somewhat randomly for the first several fight, discovered what seemed like a dominant strategy for the next couple, then mostly understood the mechanics once you gave me the power to change my digit.

The fact that I then had to experiment in the boss fight, but still had room to make mistakes, felt really really good. Like an actual long battle, where I was figuring stuff out as I went. It had a little story to it for me.

So yeah, while I agree, I think just be careful if you move forward with Single Digit of how narrow the solution space is in fights!

Yeah, I think I'm pretty conscious of the risk you mention. If I want to make it more puzzly, I also have to let the player explore the possibilities in some more easy and forgiving battles. That's for sure.

Thank you very much for the constructive feedback, anyway! That'll help a lot.

Yeah, no worries! Glad you're on top of it.

Would really love to see more!