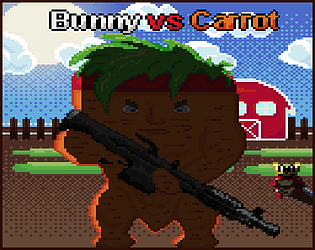 Please list any pre-made art/music/code/other assets that you used.
A few sound effects were reused from other projects, all art was made during the jam, and only the most basic movement code was copied from another project

Anything you want to say to players before they play?
Game was made in 3 days! Controls listed on itch page. For best experience, gamepad recommended (but not required).

Pretty fun, if a little cliché. ;P
Seriously though, it was fun- I don't think I've seen a boss with an attack pattern like this before, especially not one you fight in melee.  I didn't have much trouble on easy or normal, but the difference between the first two levels and the last certainly took me by surprise.

I'm looking forward to seeing where this goes in the future- There's a lot of potential here!

Hey this was very good, the pixel art, the challenge... Nice!

Very funny. And the "Hell" level if only acceptable for some challenge. Only thing I miss is the player lifes in UI (

very simple but plays well, is fun. Just too short.

Thanks! We have plans to expand the game in the future :D

This was cool! Would love to see the full version of this, and since you are taking ideias, here are mine:
-A ranged attack, maybe a power up like it was mentioned in the description;
-Maybe the game could be a boss rush, kinda like "Cuphead" or "Titan Souls", this way having a bunch of unique Boss fights and some more classic gameplay inbetween to not become repetitive.
-Maybe the power up/upgrade bits would be inbetween the bosses or/and as a reward for beating the boss in a special/skilled way;
-The bunny could attack in the direction of the mouse, it feels a little bit strange to aim with the keyboard;
-Abilities that sell more the idea that the main caracter is a rabbit, maybe he can jump, carrots heal him, etc...
- And maybe the ears on the sprite could be bigger and bounce around when he moves, just so his appearance becomes more characteristic with a bunny, since he looks more like a human samurai as of now.

And thats it! Would be really cool to see what this turns into.

(Also i beat the game on easy and normal, Hell dificulty was a bit too hard, maybe instead of only shooting and turning faster, the boss could also gain new attacks on higher difficulties)

Personally I love the idea of having a boss rush direction for sure!!
The initial idea was having some more skills (but with 3 days to finish the game we decided to reduce our scope), so they will definitely came up somewhere in the future, so stay tuned on Bunny vs Carrot page xD.
The mouse thing is already a discussion among team members so it'll probably came up on next versions.
Thank you so much for this feedback!!!

I noticed that the carrot can be easily beaten if you manage to cram yourself in a spot where his bullets won’t hit and you just keep spamming.

In Hell-mode it was a bit more challenging because there were more bombs, but still quite possible. One way to prevent this would be if you’d make the carrot kick the bunny away if he gets too close or something.

It would be fun if there was a more variety in the boss-behaviour, but still a neat little game.

The ending animation was a fun bit.

Thanks for playing and for the detailed feedback! I noticed that in easy and normal mode but didn't realize it was still possible in hell mode.

We're definitely planning on future updates, and something like a kick could be good! :D

Nice catch dis0rder!! Ty so much for this feedback!!

This looks great and it was fun to play. I wish there was a bit more, but okay what was here was fun and very polished. Well done.

Submitted
This Is Not
LikeReply
Juan RodriguesDeveloper2 years ago(+1)

Thank you very much for playing! Well so stay tuned we have plans for Bunny vs. Carrot in the future :)

LikeReply
Opossum In A JarSubmitted2 years ago(+2)

Nice one, took me a while to beat at hell difficulty but I felt like god afterwards! ^^

That is dedication!! I think it's you and the artist who've beaten hell difficulty xD

I really liked this game! I was definitely drawn in by the killer cover art. My biggest critique is that I wish you could control the direction you slashed in through means of a mouse rather than the direction the player was facing, it felt a little weird to me. The end animation definitely took me by surprise, and made me question who was really the bad guy. Anyway, I'm a huge sucker for bullet hells and really hope you make this into a full fledged game. Great job guys :)

Submitted
What the Duck?
LikeReply
Patrice Metcalf-PutnamDeveloper2 years ago(+1)

Glad you enjoyed it! Having the option to change slash direction via mouse direction was on our list but never implemented (yet). We do have future plans for Samurai Bunbun, so stay tuned 😁.

Very nice! I had fun playing this game. At first I thought it was impossible to beat at easy, but then I discovered the dash.

Wait until we start to add new shooting patterns xD. Thank you very much for playing, and give feedback!

Well done, lot of fun in this little game!

Submitted
The Legend of Belda
LikeReply
Juan RodriguesDeveloper2 years ago

Ty for playing and give feedback!

LikeReply
Lets go to the grindhouseSubmitted2 years ago(+1)

Submitted
The Boy in the Dark
LikeReply
Juan RodriguesDeveloper2 years ago

Thank you very much for playing and giving feedbacks!

Very well drawn! I was taken by surprise by the bunny's mouth at the end.

It took me some time to notice the health bar at the top and there was no other feedback if I am dealing damage. Using a more contrasting or bright color for the bar might have helped or a different sound between swinging and hitting.

Just an idea for the controls: if you have SHIFT for attack and SPACE for dash you can use those in both WASD mode and arrows mode

Yeah that was our 'Unexpected' idea :) I'm glad you like it!! Thanks for playing and feedback! We are planning to have that top bar to be yellowish, we already updated it on project files but,  still testing some things before update to itch, and indeed its a good idea to have for the controllers, I'll discuss that with the team, ty one more time!!

Nice one! Didn’t manage to beat it at Hell difficulty, that was fun. Great job!

Thank you for playing and giving feedback! Indeed Hell level is really hard, I even took a lot of tried to beat it myself :)

Well done! Liked the sounds and art, and that I could use my gamepad.

I tried way too much to finish the hell difficulty, without success, but had a lot of fun trying!

Submitted
The Legend of Belda
LikeReply
Juan RodriguesDeveloper2 years ago

Hey thank you so much for playing and giving us feedback! Indeed Hell level supposed to be a insane difficulty, but beatable XD. Glad u liked, keep your eyes open, we have plans for Bunny vs Carrot in the future :D

I liked your game description :-) The graphics and the sound, gameplay, and sound were all really well done. I think you should have added some other enemies or boss movement or environment changes or something though. I usually just need to run around the carrot and keep attacking so adding one of those would have changed it up a bit. I have to applaud you for completing this in only three days. It's polished and fun!  Play my game if you have a chance!

Thanks for playing and commenting! Totally agree we should play around with additional challenges (and planning to! Be sure to follow if you want updates from Samurai Bunbun :-)

Nice game but it's easy to complete.

By the way check out my game.

With cover art like that, how could I not play this game!

After dying 3 times on normal I flaked over to easy mode :')

And thanks so much for playing and for the compliments on the cover art!! :D

the characters were original. Sometimes the character wouldn’t respond to the keys but very enjoyable overall

Thanks for playing and commenting! 😄

Was the unresponsiveness throughout? Any pattern to it you noticed, by chance?

Took me a few tries but I managed to beat the Carrot boss on normal.  Very Original Game. I likes.

Thanks for playing! Super helpful to know it took a few times. That's around how difficult I was hoping normal mode would be for someone new to the game (that's a fan of this sort of style) 😄

I also would have preferred Space to dash instead of shift. It was a bit hard to dash with my pinky. I would say normal was too hard for me but I didn't want to beat the game in easy. Gamer pride :v

Hmm we might do some more fine tuning on difficulty, then...thanks again! 👍