"He's back, and he's mad... AGAIN!" Clean the streets in this retro inspired beat 'em up!
Submitted by Davide Puato (@launcherdoom), atreyoauron — 39 minutes, 31 seconds before the deadline
Add to collection 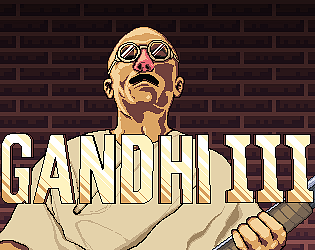 Please list any pre-made art/music/code/other assets that you used.
Only the music.

The game is still not 100% done, so expect some bugs and lack of polishment, we are still working on it, so keep an eye out!

Good btmup, but I want more unexpected mechanics! :D But graphics is amazing.

Thank you! And indeed, we didn't have any idea for something crazier and unexpected with the mechanics, it all went in the theme. And thank you, the graphics took quite some time to make.

The art is fantastic! I love what you did with this genre.

Nice design and it was unexpected to have a beat them all with Gandhi as main character, Well done !

Submitted
The Legend of Belda
LikeReply
Davide PuatoDeveloper315 days ago

Thank you very much! Your game seems to have awesome art too! Will play it later.

Love the art on this one! I agree with one of the comments that some more audio cues would be nice, but overall has a great tone and feel to it. Nicely done!

Thank you! Indeed, we didn't have time to put SFX during the jam, but after reading all the feedback we fixed some bugs and added sound effects to the new version.

Awesome job! Would've enjoyed some audio feedback for punching and stuff but other than that everything was phenomenal, the artwork was seriously outstanding and I enjoyed the classic vibes a lot.

Thank you so much, the art was quite the work to get right. And about the audio feedback, we just released a new version with hit sounds, bug fixes and with some more polishment! So thank you for the feedback, we still are working on it.

Cool! If you find anything weird just let us know!

Thank you! The music was from here https://www.youtube.com/watch?v=qN7miZz-w6Y , this channel has a bunch of royalty free music, so its quite recomendable!

the gandhi we all remember and love

Submitted
Your Hand Is A Glove
LikeReply
Davide PuatoDeveloper319 days ago

Oh yes, the one and only.

You guys already have my love just for being able to put together a beat'n'up, and on top of that the gameplay is pretty cool, with a little more polish and you already have a game ready to ship

Thank you so much for the compliment! We just added a new more polished version, and will still improve on it.
We just aren't sure if we should actually make it a full shippable game because of copyright reasons, since its inspired by Weird Al's movie UHF, but we will see, if enough people are interested we will probably make a longer version, and thank you again for the comment!

Btw I got a little bug right when I defeated the first dudes and walk to next screen, I was at the right side of the screen and all enemies were with me like in the same spot, and I couldn't move and the the enemies were not attacking as well.

Oh yes, we just fixed the bug on the new released version, hopefully it does not have any more gamebreaking bugs!
And thank you for the detailed feedback!

LikeReply
Lets go to the grindhouseSubmitted320 days ago(+1)

I liked it. was fun and cool style i wish there was sound effects thats my only gripe. well done

Thank you for the feedback! We have just released a new version of the game, we now have put some sound effects on it!

I like how it looks, but was hard to control. I think at some point there was an error on the code coz it stops to attack and i died =(

but is a game jam project and looks good

Indeed, it has some gamebreaking bugs,  we are fixing them as i write this comment, and thank you very much for playing it!
It wil be probably be fixed until today or tomorrow.

Didn't expect Weird Al's UHF reference but here we are.

There is a problem with controls though - sometimes after (-> -> punch) attack, Gandhi stops responding to controls and moves in one direction.
Second small issue I'd say that game is *very* unforgiving - you take a lot of damage (especially from guns) but instead of respawning in-place, the whole level restarts D:
Third, I don't know if it's my setup or not, but there's weird screen flashing to blue in startup screen, but in-game it's fine

Still, had some fun tho!

I had the same problem , I couldn't play the game after Gandhi stop responding. I didn't have the screen flashing bug though in my screen. Other than that game was great for 2 min.

Thank you so much for the feedback! And indeed, just found the same bug after your coment, we did not have time to test the build on other PC's, so it's still buggy and unbalanced, if the jam permits we will fix it as soon as possible, thank you!
About the flashing screen, i could not replicate it here, i think it suposedto be the "Winners dont do drug's, by the FBI" screen.

I'm back just to say that we just fixed the problems you both reported, thank you very much for the feedback!
And unfortunately we could not find the blue flasing screen one.