The hunt for the escaped prisoners has begun!
Submitted by Artem Flo / aturbidflow / kubikámi (@aturbidflow) — 3 days, 16 hours before the deadline
Add to collection 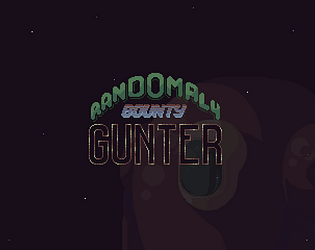 Please list any pre-made art/music/code/other assets that you used.
No premade assets, everything was made during the jam period. Except Phaser engine, of course.

List each team member's role, along with their social media / website links!
Artem Flo — idea, coding, graphics, sounds, music and everything else

Anything you want to say to players before they play?
Controls: Arrows/WSAD, space, mouse. Carefully read the description on the game page. 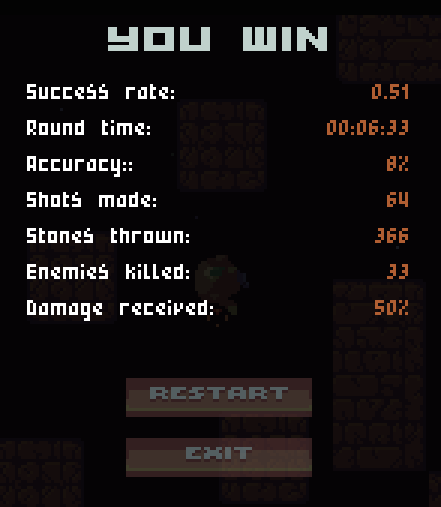 The graphics and audio fits perfectly with the theme. The voice comms/narrator is great!

The movement is very chaotic, which I loved it! It adds a lot to the "unexpectedness" of the game. I had a lot of fun playing it.

Nice visuals and voice effects, I felt the game was relatively fast paced, which for me, contributed to the fun of it. The gravity system is smooth but slightly confusing and indeed adds unexpectedness (even though clearly not the main unexpected factor) initially.

Unexpectedness factor is fairly present once weapons are switched.

A bit hard to move around due to so many blocks getting in the way, very fast moving enemies,  and having to think what button to use in order to jump or move in the right direction depending on how the gravity is pulling you. Still, these things aren't necesarily bad, just a hinderance that makes it slightly complicated when playing for the first time.

By far the most confusing thing I noticed was the tiles changing texture (I'm guessing it's that dimension anomaly thing)? Also I'm fairly certain I got teleported to somewhere random at some point. Either that, or I died without noticing or was just confused by tiles changing texture. No lag for me, but after the 3rd texture change, the game crashed on browser.

Thanks for playing. Yeah, some glitches with rebuilding the map is still exist. Now I'm working on huge update for post-jam version and I will try to work on each issue. Thank you!

Great visuals and badass music. I had some troubles with the performance the seconds before the new bricks are loading. But the overall game are great. Good stuff.

Yeah, will check perfomance issues later. Thanks for playing!

I really enjoyed the visuals and music, and thought over all this was really well polished, nice job!

One critique I'd give is there wasn't much variation in gameplay so near the end it gets pretty tedious, maybe add some different enemies, or mechanics.

Yeah, there should have been three changes of enemies, but I just didn't have enough time to implement ( Anyway, I'm going to make it a whole-game with a lot of mechanics. ;) Thanks for playing!

This game will have a downloable version?

Mmm, I don't think so. It's Phaser engine (JavaScript). So to build a desktop version I will have to use Electron or something. It's very time consuming.

It's okay, your game look and sounds good, but my computer can't do much.

It's known issue. Switch off everything in preferences of the game. In 99% cases in helps.

LikeReply
Cita A F317 days ago

It's too hard for me personally, but it's DOOM 2D so it's cool

Yeah, DOOM games is one of my favorites of all time. Thanks for playing!

great game, i like the mechanic of attack using the walls, but the movement is to much chaotic for me, cool and original mechanics, good job.

Thanks for playing! You game is pretty good too ;)

The art and music is great! Had some minutes of fun, but i think that the movement is a little bit too confusing, and the enemies are too fast, could also be because the camera is too close to the screen, so when they appear the time window to shoot them is too short.
But it definitely could be trully great with some polish.
Also really liked the "melee" weapon, was even more fun to use than the gun.

Thanks! This idea I've got in last moments of development)

LikeReply
Shot out gamesSubmitted319 days ago

Game looks and sounds great. Lots of juice and polish. I just don't get the player movement. Was this by design?? Still a good game made better by the fact that solo and all assets. Major props for that as well.

Yep, it's by design. It's side scroll platformer with random gravity. And blocks attracts, so it's not easy to move through the level. Yeah, bad design, I know xD

LikeReply
Shot out gamesSubmitted319 days ago

This was really fun! I love the music and the voice over.

Only reason I didn't play again after dying was the weird physics. I'm focusing so much on navigating my character toward the enemies, then they fly right by in the blink of an eye and are pretty tough to hit. It's a slog to kill 30 of them.

The right way to move is climbing the stones, as they are attractors. Yeah, it's a "little bit" hardcore for now. Gonna fix it after the jam. Thanks for playing)

the physics bugged me, i like the artstyle and what you did with the voice overs =)

I love the gameplay, audio, visuals and the entire idea! :-) I've been missing some health packs or power-ups (or at least I haven't found any). As others have pointed out, the steering is a bit tough - I'd gladly play a version with reduced gravity (maybe it could be controllable when starting the game - like "easy = low attraction to surfaces", "hard = high attraction to surfaces"). Fantastic work nonetheless though.

Thanks. There are no powerups/packs for now, but probably it will be in the postjam version. As well as choosing the difficulty level)

The movement controls were a bit weird for me and I found it a bit too fast, making it hard to aim. This might just be my bad gamer skills though. The graphics, music, and dialogue were all really well done. It is like a 2D version of DOOM. Great game overall! Play my game if you get a chance!

Surely! I just go game by game sorted by date. There will definitely be a moment when I reach yours)

Wow, incredible game, WELL DONE! I love the design and the sound !

LikeReply
Lets go to the grindhouseSubmitted320 days ago(+1)

I loved this game the music and the vibe right up my street only problem i never play browser games and was getting so into it i kept accidentally clicking off screen haha  well done.

Thanks! Going to check your submission tomorrow, too tired today, too many games ( But FMV game sounds interesting

Awesome! I really love the pixel art and audio you made for this game. I was really bad (13% accuracy - oops) but had lot of fun!

Looks polish and really dynamic, my fav so far!