Submitted by dzejkop, Patryk27, mgr_inz_rafal — 12 hours, 49 minutes before the deadline
Add to collection 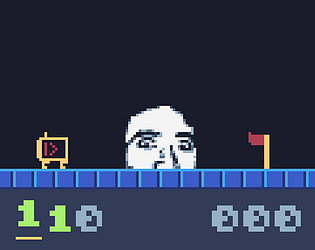 Please list any pre-made art/music/code/other assets that you used.
None, unless using an engine counts, in which case - TIC-80

Anything you want to say to players before they play?
Use arrow keys to move,
use 'A' and 'S' to choose the bit to modify
'Z' toggles the selected bit
'X' hints at bit effect

I love the concept here! Messing with the game's rules is a great mechanic. There's a few issues that that some others have mentioned, like Zoolouie's note that the stage-changes can be hard to understand, and re spawning with "Z" killing you, which lots of people pointed out. The controls feel a bit floaty, but that's not much of an issue since you aren't meant to beat levels using raw platforming. Beyond that, the gameplay was quite engaging, and I like the aesthetics. Also, having "X" remind you which bit is which is a nice touch- It helped me avoid some unnecessary trial-and-error, which I appreciate.

The single best game I've played in this jam so far. It nailed everything, the music was great and the visuals had a very appealing style and both of them came together to cement the computer/8-bit theme of the game.

Along with this, the game truly delivers on the gameplay front, I didn't know what to expect from the controls, but the puzzle platforming through the use of flipping bits is such a phenomenal idea and while there were a few annoyances (such as the pressing z to respawn and immediately dying), it didn't really detract from the overall experience for me.

If there's any game in this jam that I'd like to see go on to become a full blown game, it would have to be this one.

This is a great entry, can totally see this game working, just got stuck on the wall a lot =/

Wow I loved this one, really good idea and smart puzzles!

Submitted
The Legend of Belda
LikeReply
hankworxSubmitted2 years ago(+1)

Neat little game. I'll echo a lot of what others said here. Innovative mechanics but I found the controls a bit cumbersome. I also went right for the Z button after respawning only to die immediately. Maybe it might make sense to leave the selected 'bit' highlighted after respawn. This took me a few levels to understand the mechanics completely, and by the time I understood them, the game got a little too frustrating for me. Also, the music is probably my favorite thing about this game. Nice job :)

Nice and innovative system. Bit hard. I also keep pressing the z as default and fall down the floor. Maybe it would be better the spawning would happen automatically. Overall nice one!

I found the game enjoyable, but really frustrating at the same time.

I think the fact that the skills are hidden is more of a hindrance than a challenge, and not very fun.

Also, I think the re-spawning could use a little tweaking. I instinctively always pressed Z (a default button in many games) after dying, which meant I fell through the floor to my death yet again !

But I still found the game quite addictive.

This is how far I could make it this time.

But I’ll say that the game-mechanics are quite unique, so I’d encourage further development if you’re motivated.

BTW, the “pass-through-walls”-mechanics yielded some quite interesting results.

I’m not quite sure was I supposed to be able to do this?

You were definitely supposed to do that ;) in fact there's one level, where doing this and moving to either side is a valid solution :P

And thanks for the feedback, I'm glad you enjoyed it!

This is a pretty cool game with an interesting mechanic. I did quite a few levels before getting stuck, it's impressive that there are so many levels. A level select screen would be nice so I can see where I got to.

The whole system of 6 bits to change is very interesting, and each bit is unique. However, I found that I just didn't use some bits at all. For example, after the first few levels I stopped using the first bit as it seemed like it wasn't necessary. I also didn't realise when the last 2 bits were introduced because they never felt necessary to complete a level (at least where I got up to, maybe they are used more later on). I think the issue is that there are too many options which give the player too much control to complete the level while completely ignoring certain mechanics. That could also be a positive if that's what you're going for - multiple ways to solve each level.

The controls are hard to get used to but I don't really know how else you could have implemented them - maybe the 1-6 number keys like someone else said? If you add mouse inputs it would be intuitive to be able to just click the bit you want to update. Also, I don't think you should have to hold X to see the hints for the bits, I feel like that could just be shown to the players by default (although the current UI looks clean so I understand why you've done it that way).

The graphics and music of the game are really great and fit together very well!

The wall jump is weird but cool! I think it fits well with the rest of the game.

Overall I liked it! How many levels are there?

We've prepared 14 levels - most of them were actually designed to be solved in many ways (e.g. the sixth level has at least three entirely different solutions :-D), but I agree that some are probably way too simple (i.e. compared to the game's average difficulty).

Thank you for playing and preparing such a thorough comment! :-)

The bit mechanics are really nice, I'd love to see it in greater detail.

Puzzles are really cleverly made, but I found a bug, this being that even if you died, if your tombstone would touch the flag, it would prompt me to the next level.

Also, if you used the final bit, the "warping" one, the one that will put the player at the top of the level if they fell down, and you would quickly toggle the first bit on and off, the player would get stuck between the top and bottom of some levels (the ones that had a floor and a ceiling/roof).  I found myself just positioning the player above the flag, and turning the first bit on, after which the player would just fall to the flag.

This combined with the tombstone thing I mentioned earlier, meant that some levels were really easy to pass, without needing to solve the puzzle in that level.

But leaving this aside, I had a good time playing, really cool art, great music, and overall, a lot of fun! Great job!

About that tombstone bug: it's actually a part of the game's mechanics (we've called it tombstone drifting); initially there was a level requiring player to perform this technique to win, but we've struggled on how to present it to player and eventually we've abandoned the idea, leaving tombstone-winning as an easter egg  (unexpected!) :-)

Wow! I really felt like I had broken the game! Great work, guys! Really an awesome game! :))))

It was really fun and challenging game.

Hey, I thought that the idea is insanely creative and clever and I really enjoyed the ways you required the player to combine mechanics in order to win. My biggest critique is that I really didn't understand what the stage-changing ones did - or if there was a way to predict what would happen without random trial and error. That said the puzzles were really clever and I was blown away. Great job :)

Submitted
What the Duck?
LikeReply
dzejkopDeveloper2 years ago

First of all, thank you very much, I'm glad you enjoyed it!

And about the stage changing? You mean the 3rd and 4th bit? Those shift the level half a length respectively right or left.

And all the levels exist on the same "map", so you can sometimes see them peeking through, and for some levels we designed it so that there's a little bit more of the level there.

Really well done puzzle platformer. Nice art and interesting mechanics. And I believe it's possible to complete levels in different ways? That's also a plus.

The controls are a little hard to get used to - you need to keep track of what each bit does what and which bit you have selected and what is it's state and - for the love of all that is holy - to not press 'z' when prompted to respawn D: I kept doing that throughout whole game, lol

Despite the controls (or maybe because of them?) beating each level felt rewarding

Love the puzzles and abilities!

The amount of times I pressed "z" first when I meant to press "a" and fell through the floor to my death is embarrassing.

The games graphics is really good. But for me the game felt a bit buggy, and I was not to get very far intro the game.

Damn, it's attractive. But too hard for me. It would be excellent if bits can be assigned to numbers 1-6, but I know it's immpossible due to console restrictions. But with this controls I just do not have enough time to switch them ( Anyway, great arts and sound design.

Submitted
The Legend of Belda
LikeReply
cnewtSubmitted2 years ago(+2)

This is a really polished game! The graphics, music, and gameplay are all really well done for a game jam. My criticism would be that the controls are a bit confusing. I know that you are meant to figure the controls out through the game but I personally would have liked a tutorial so that I know what tools I'm working with to solve the puzzle. Actually less may have been more in this case. If you picked only like 3 controls instead of six, you could have really delved deep into a few controls instead of making the player wrap their head around so many controls. It is still very impressive given the time you had to work on it. Great job! Play my game if you get a chance!

Cool game, really makes you think outside the box! The controls made my brain hurt in the beginning but when you get the idea it is very enjoyable!

Pretty addictive , Fun and cool music i liked this alot

Submitted
The Boy in the Dark
LikeReply
dzejkopDeveloper2 years ago