Hi! I used the Godot Game Engine. It's a really cool free open-source project, that has some very impressive capabilities! Here's a link to the project's website, if you want to take a better look at it: https://godotengine.org/

P. S. : Sorry for taking so long to reply, I just didn't have a lot of time to open itch. Thanks for the comment, and hope this is still helpful to you. Cheers!

So funny, man! I loved every bit of it! (Maybe the hard difficulty was a little to hard, but I had the most fun playing on hard :))) )

Hey! Thanks again for the kind words! Didn't expect that anybody would play my game twice, but I'm glad I made a game that you enjoyed! Thank you so much for the feedback. I really would have loved to make a more polished UI though... but time was not on my side  :)). Thanks again!

Thanks for the kind words about my humble little game! I will keep your feedback in mind!

Thanks for playing and leaving some feedback!

Hey! Thanks for playing the game and for leaving feedback! I'll keep it in mind.

Wow! Didn't expect that! I LOVED IT!

I loved it to bits! Really funny and unexpected. Great job!

I enjoyed platforming through the level.

Also, the relationship between the duck and the narrator felt really nice. That duck is such a lovable character!

Wow! I really felt like I had broken the game! Great work, guys! Really an awesome game! :))))

The bit mechanics are really nice, I'd love to see it in greater detail.

Puzzles are really cleverly made, but I found a bug, this being that even if you died, if your tombstone would touch the flag, it would prompt me to the next level.

Also, if you used the final bit, the "warping" one, the one that will put the player at the top of the level if they fell down, and you would quickly toggle the first bit on and off, the player would get stuck between the top and bottom of some levels (the ones that had a floor and a ceiling/roof).  I found myself just positioning the player above the flag, and turning the first bit on, after which the player would just fall to the flag.

This combined with the tombstone thing I mentioned earlier, meant that some levels were really easy to pass, without needing to solve the puzzle in that level.

But leaving this aside, I had a good time playing, really cool art, great music, and overall, a lot of fun! Great job!

Hey! Thanks a lot! That thread will really help me a lot in the future! I'm also glad to hear that you enjoyed my little game.

Ok, so I left the game running up until day 2000 and a bit, and there was no sign of crashing. Can you give me a little more details about your crash? (Also, please tell me what browser you used, so I can try it in that browser also. I used Opera GX to run the test.) Indeed, the camera lagged behind a bit, but that was it. Thank you in advance! 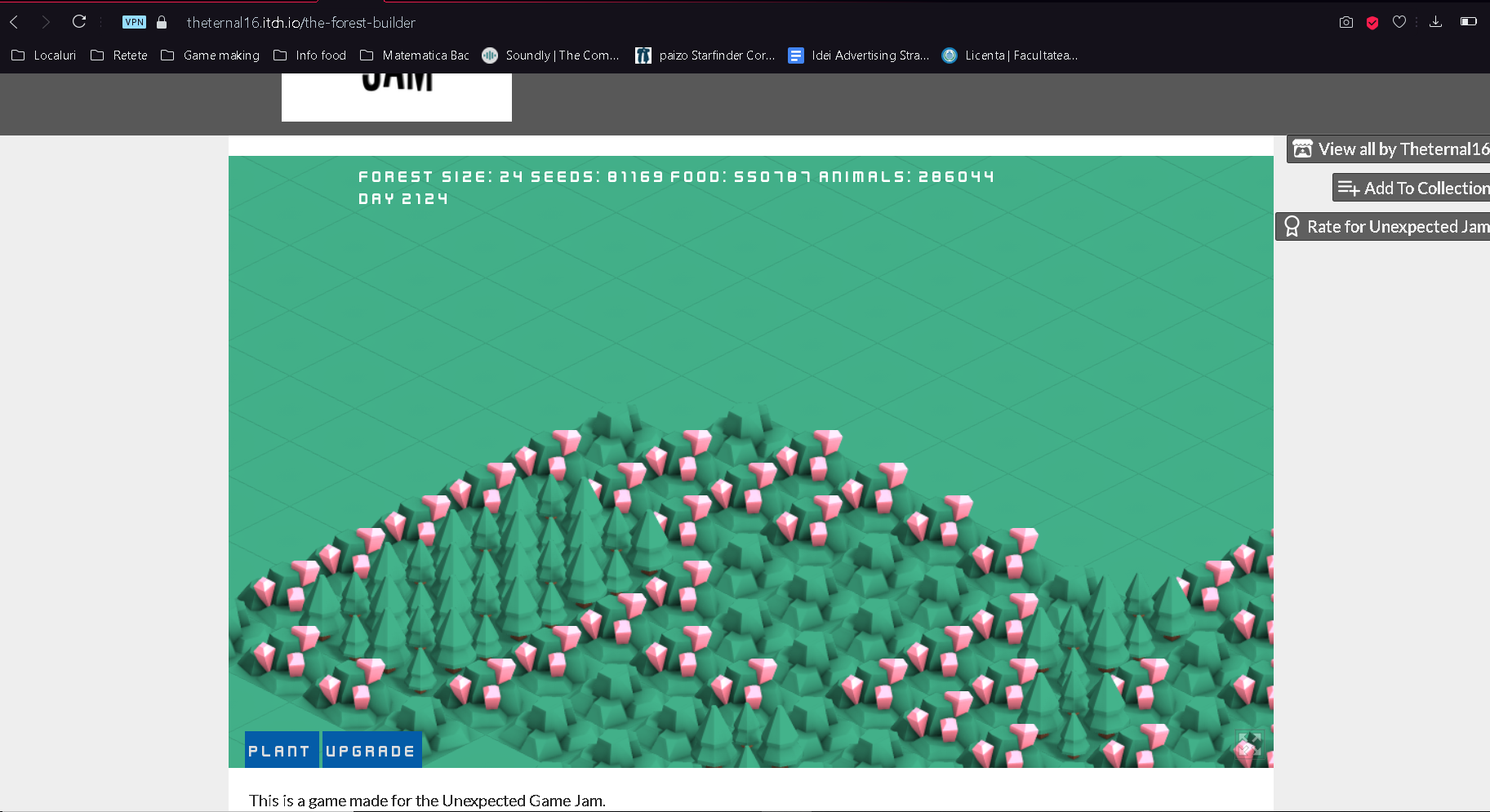 Hi! Thanks for playing and leaving feedback! I will take more time designing the UI next time.

Thanks for the feedback! I will look into that crash, see what's going on.

I wasn' t aware of that crash, thanks for pointing it out! I will look into it.  Also,  thanks for playing!

Hey! Thanks for dropping some feedback! I will keep that in mind :)

Hi! Glad to hear that you enjoyed my little game! I planned to add some kind of events, to make the gameplay a bit more challangeing, but I didn't have time to properly implement them. Anyway, thanks for the feedback, and I will keep everything you said in mind!

Thanks for the feedback! I will keep that in mind!

Hey! Thanks for the feedback! I'm really glad that you enjoyed my little game. It was in plan to add visuals for the animals, but I didn't have the time... Anyway, thanks for playing it!

I know... I didn't have the time, but I wanted to add a few events. Anyway, thanks for playing it!

Thanks man! Did you like it? I know it's a bit rough around the edges...

I enjoyed it 'til the end. Very well done, and the music and sound effets just make it that much more enjoyable