Can you get past the loading screen?
Submitted by cnewt — 3 hours, 59 minutes before the deadline
Add to collection 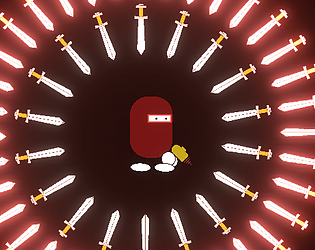 Please list any pre-made art/music/code/other assets that you used.
The music was downloaded from the internet. I'm giving credit at the bottom of the game's description.

Anything you want to say to players before they play?
If the screen resolution is too big, zoom out with control minus. I also love feedback so make sure to comment! I would be happy to rate and comment on your game as well.

So funny, man! I loved every bit of it! (Maybe the hard difficulty was a little to hard, but I had the most fun playing on hard :))) )

I was laughing. If give this game more uniformed visual style -- that would be a masterpiece. Anyway, voiceover already is a masterpiece.

Haha, I enjoyed it

Was not expecting it to ask me for a premium pass to play the game.

Cool game, and great voice acting too! I kind of wish you didn't add the screenshots of the game, since they kind of revealed what was supposed to be unexpected in the game. Overall, this game was hilarious to play, and I'm kind of sad that I only played one level of the actual game. Totally a steal of money, so that's why I pirated it. Oh well, it was secured with an evil AI.

Great loading screen, awful game. Now serious, the concept it's fun and the controls feels good. It would be nice to add some particle effects .

Took a really long time to load, and when I finally got to play it was very disappointing. I'm glad you at least put some effort into making the loading screen one of my favorite games in this jam ;)

This is pretty neat, I especially liked the voice acting lol. I think the bullets should've hard more impact such as particles or something to make shooting the boxes feel more satisfying. Other than that, well done :)

Love the idea where "loading screen" is better than "actual game".

I enjoyed all the funny messages for the ads! I also loved all the little details - the character getting squashed by the fists, the thanks for playing message, getting to play a single level of the game, etc. Had a great time with this one.

Thanks so much! That means a lot. This game took a pretty long time to make.

Submitted
Corrupt Worlds
LikeReply
Opossum In A JarSubmitted2 years ago

The game was boring, but the loading screen was awesome! (see what I did there?) Pretty cool game, and I loved how shooting slows you down! Very smooth controls! Man I hate it when I want to play a game and I end up buying cars :(

😂  I love your comment. I saw "boring" and I was taken aback for a minute. Thanks for playing!

The narrative and voice acting was great :D The text that showed when you died by touching an ad was pretty funny too.

As for the gameplay, I liked that the camera shook when you shot and that there was some recoil too which I could use to avoid the boss at the end. I don't think there was any use in me jumping other than just pressing the button, so maybe another obstacle that you have to jump over might be a good addition.

Overall a pretty fun game! Would be great to play more levels of that golf game too haha

Thanks for the great feedback! I was having doubts about the game before submitting it so it is really good to know that you had fun.

Cool idea, narrative-wise felt a bit like Portal / The Stanley Parable (which is a virtue, ofc.!). The hard level is properly hard :-)

I hope it wasn't too hard though! I often have a hard time balancing since I'm usually the only one testing my levels. Were you able to finish the game?

To be honest, I haven't been able to finish it - I played it on the hard level first and wanted to retry today on the easiest, to get a comparison :-)

Okie, I've replayed on the easiest difficulty - I got stuck at the boss level though :-(

Nonetheless the game is turbo fun - I love the ads' descriptions :D

Submitted
The Boy in the Dark
LikeReply
thiscrisSubmitted2 years ago

I love your character animations definitely makes the game much more engaging!

This was super fun!! I played on easy difficulty and super appreciated that option. The art I think all worked well together, the ads were hilarious, and the movement/controls intuitive. There were definitely enough obstacles and baddies to make it seem complete.

I wasn't quite able to defeat the boss after half a dozen tries, though xD (though really loved how I could just restart that level -- so crucial imo for a game like this). Not sure how close I got to killing the boss either -- some additional visual feedback or health bar or something would have been nice. I could see one skeletal hand had some cracks, but I wasn't really sure when I was damaging. Like, was shooting at the skull doing anything? Should I focus on the hands?

Really well done and scoped for a jam game! The voice overs were probably my favorite part :D

You made some very good and helpful points. Thank you! Yeah I think I should have made the easy difficulty a bit easier. I just had a hard time balancing it because I didn't have many people testing it. As for visual feedback, I get what you are saying and I will totally keep that in mind for my next game. You were only supposed to shoot the hand blocking the button. I'm so glad you liked the voiceovers. Halfway through making this I thought they were kind of cringe so it is really good to know that I wasn't making a mistake. Thanks a whole lot for the great feedback! To anyone reading this comment, patrice's game is hilarious so you should check it out!

Oh, do I know about game balance issues. I think we finally  have our own difficulties sorted...somewhat....ish... xD

Such a fun idea! Combined with the great voice acting and nice simple graphics this makes for more than a good game!

Lol. 😂 Thanks for playing!