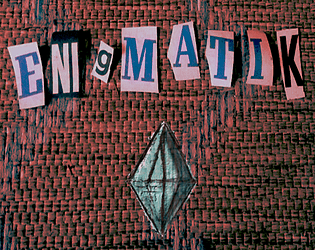 Please list any pre-made art/music/code/other assets that you used.
I produced all content of the game myself. No 3rd party-assets were used.

Majority of the assets were created during the jam, but I recycled some of my old work.

- The "Knife"-minigame is based around an ink-drawing I made a few months prior. I scanned it, did some coloring and used it as graphics.
- The music in the said minigame is a slight remix of a song I made in early 2016.

- The "Burger"-minigame originates way back to year 2004! It's based on a very simple joke-game I made back in the day. I basically reworked 98% of the stuff, but used the old one as a template.

- The outerior of the museum is a tracing of a photo I took in May 2019.
- A handful of sound effects from my previous projects was reused. (Like the walking-sounds of the character, mouseclick and some collision-sounds).

- The cloud-animation is recycled from my previous LD-entry Tabula Rasa.

- The portraits in the museum were generated by an AI (thispersondoesnotexist.com) and further manipulated by me on GIMP.

I might have missed something, but basically everything else was produced during the Jam. It was a lot of work!

Anything you want to say to players before they play?
I guess the only thing I can say is that you're in for a ride, my friend.

The game is controlled entirely by mouse. A touchpad/trackpad is fine too, but one of the minigames might prove challenging without a proper mouse.

But don't worry, you'll still be able to beat the game.

That squashing sound is kind of satisfying though!

Very original visuals and good music, but no sense of horror. Anyway, I like it.

Hey. I recorded a video about the Unexpected jam and included your game in it. If you want to cut your game out of the video, let me know. However, if you like the video, I make similar videos every day. I will be happy if you subscribe. Anyway, I enjoyed playing your game.

Thanks for featuring the game!

Also, that’s a nice thumbnail mash-up of the games you’ve created for the video! )

Thank you. I enjoyed playing your game. I make such thumbnails and videos every day. :D

Finish the game wanting some more! Loved the art style. Theres a chance to really get the burger? That will don't let me sleep well this night haha. Good experience.

It’s possible that I will expand the game at some point, but probably will take quite some time.

And sadly, it’s impossible to get the burger (as of yet).

Among the games in this jam, I think this is the one with the most "soul". It has a particular, definite atmosphere, that one can easily remember or recognize. Good job man, I envy you a little bit :)

Submitted
Your Hand Is A Glove
LikeReply
dis0rderDeveloper309 days ago

It means a lot.

This is a really weird, surreal and funny game. I overall liked it, but I wish there was more of an ending.

Submitted
This Is Not
LikeReply
dis0rderDeveloper311 days ago (2 edits)

Yes, the game ends quite abruptly. I had a more in-depth ending planned, but I ran out of time. (As always !) 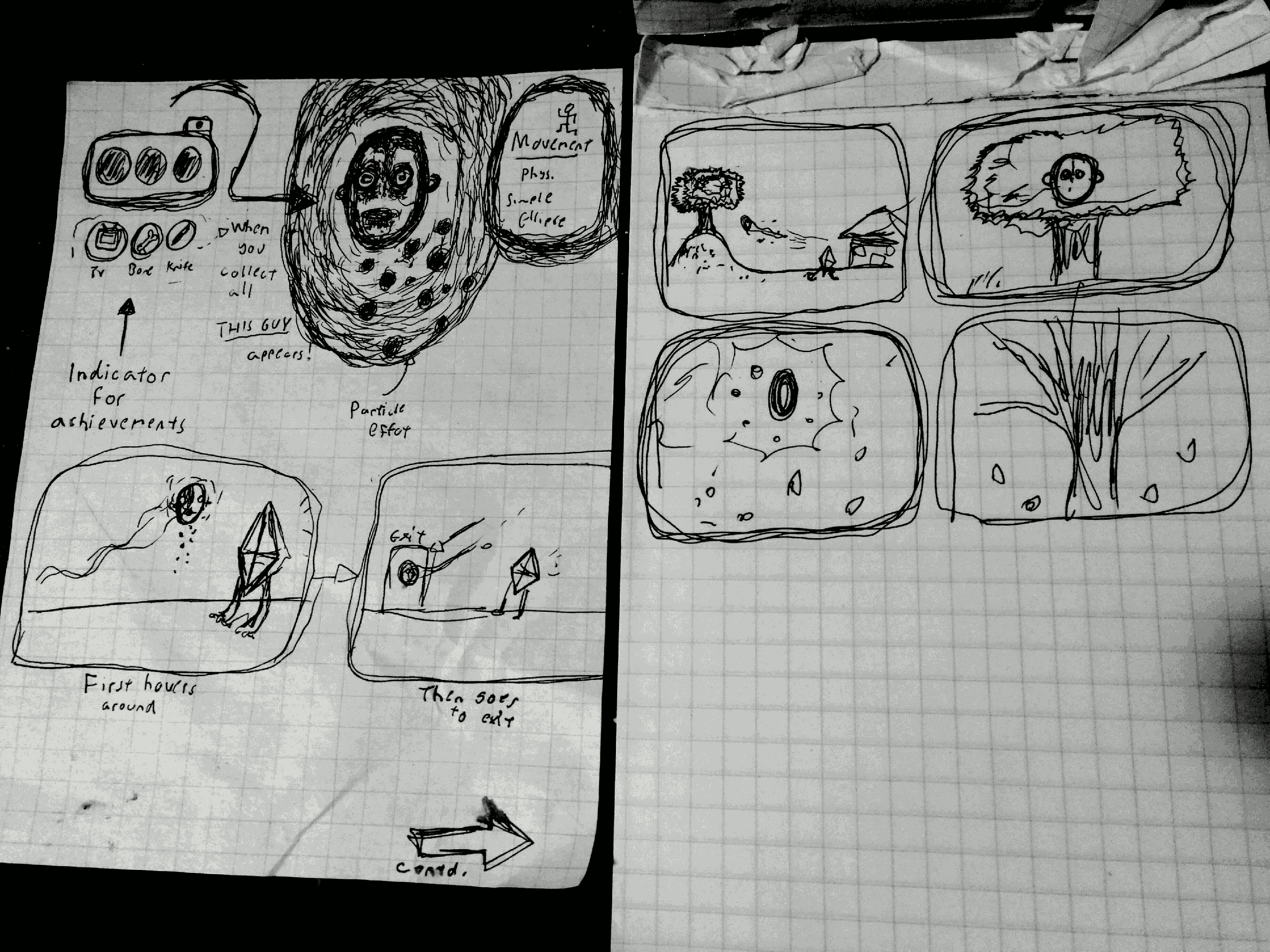 Here’s a little design-document as some consolation.

It doesn’t show in the sketch, but there was also gonna be a final hidden area left to the tree.

I absolutely adore the audiovisual setting, minigames and the overall idea! I'd downright totally play a fully-featured variant with some more (back)story :-)

But whatever the case, I’ll be doing stuff with similar vibes in the future, that’s for sure.

very interesting game, i really love the art and the music, the gameplay is simple, but i think this is good because a hard to complete game can make that some people miss the complete experience, good job.

Yeah, some of my earlier games are notorious for their difficulty.

This time I intentionally made it so no player would get stuck in some masocore-trap and could see the full story.

Well this was pretty interesting and unsettling. The art style is very cool. Unfortunately I got stuck looking at the tv, but it seems like the bottom of the game was cut off for me so that may have been causing it.

That’s unfortunate. Were you playing the browser or desktop -build by any chance?

If the bottom of the screen was cut off, then you can’t press the buttons to advance. I was actually thinking that if some players have some screen-scaling issues, it might become a problem.

Should probably add an option to use a keystroke as a fail-safe or something.

In that case your browser was probably zoomed in.

In most browsers you can zoom in/out by CTRL and + / - or CTRL + mouse-scroll.

Oh wow I never even knew you could do that!

LikeReply
Lets go to the grindhouseSubmitted314 days ago(+1)

Glad i am not the only one to make a creepy game for this jam! I loved this game so atmospheric and entertaining well done

Submitted
The Boy in the Dark
LikeReply
dis0rderDeveloper312 days ago

LikeReply
Opossum In A JarSubmitted314 days ago(+1)

This was the best one I played so far! Solid 5 stars to every aspect. I could tell some art was placeholder, hopefully you'll work further in the future to keep the aesthetic even higher! Sound design also very good. I liked the... questionable mini games. I clicked on every painting just for the sake of it! But everything was sooo expected, jk of course! Congrats! Solid 5 stars

Thanks, I appreciate it !

Yeah, there are some placeholders intact, and one was actually intentional. My way of doing things is so meticulous that I tend to run out of time during Jams.

I would’ve also liked to add a more gratifying ending, but time is always short. But still, I’m quite satisfied with the result this time.

And it’s nice to hear you enjoyed the “art-exhibition!”

That’s a known issue with applications developed by ClickTeam Fusion.

Apparently it has something to do with the runtime-compression or some other technicalities.

Quite annoying, really. Probably need to look into it at some point.

on the brightside i liked your game so much it inspired my new games main character hah  you should check out my jam game when you get the chance   it is 4-9 minutes long  we had some similar vibes going on really loved the atmosphere ,  me or you have the weirdest game in the jam in my opinion lol

I tried your game. I like the experimental approach and use of real photography, something I’ve been doing myself for some time now. Also, the snowy forest felt really nostalgic and hit home since it’s a very familiar environment for me.

If you put more work into the game-play/interface-aspect in the future, your stuff’s gonna be very cool.

Wow, um, wow. Feels like inside of a creepy, crazy music video.

Haha! I’ve never produced a proper music-video, but I’ve always liked the idea of doing one.

it was challenging without a mouse. So the only thing I would say is maybe make a development for people with laptops? But very creative story. Probably my favourite mechanism so far

I considered including keyboard-controls, but didn’t have time for that among other things.

Obviously it would be easy to implement, apart from the “Knife” mini-game since it relies heavily on mouse.

I have a few ideas how to make it possibly work with keyboard-controls, though.