This Is NotView game page 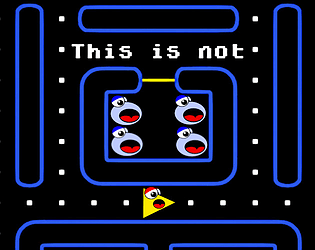 This Is Not's itch.io page

Please list any pre-made art/music/code/other assets that you used.
None

Anything you want to say to players before they play?
- WASD or Arrow keys to move Mr. triangle.
- R restarts the game
- Escape to quit the game

Nice entry! I like the combination with the music, therefore it was a nice twist on the p.m. The music is really fitting and nice!

Due to the ryhthm, sometimes it was hard to get around corners and i saw myself smashing the WASD.

Hey! I thought the core mechanic was really creative and cool, I liked how you combined popular genres. I think that giving the player a little more control would go a long ways, because the song changed in some places in ways I didn't expect movement happened kinda at random. Maybe if there was an indication to what the next "stanza" or movement type is so the player could make a strategy around it? I really liked the game and had a lot of fun playing it, great job!

Submitted
What the Duck?
LikeReply
megarontv261 days ago(+1)

I was a little confused about what I was doing at first, but once I figured it out, I thought this was a really unique and interesting project. I had never considered a hybridization of Pac-Man and Crypt of the Necrodancer, but it turns out, it's pretty neat! Nice job.

This is a great little game that is remarkably well made. Without spoiling anything, the mechanics that the game relies are implemented fantastically and run smoothly and without issue from what I've seen, which is not an easy feat given the time frame.

A good number of the games submitted to the jam feel like prototypes, as is the nature of Game Jams, but this games feels like all it's missing is some possible graphic polish and more content and it could easily be a game worthy of being sold.

Very cool rhythm-based game! Not what I expected at all from the screenshots.

Funny, i like the bg music, the mechanics are original, but i feel them a bit confusing, may be an option to stop the player during a music beat will help to avoid the enemies, besides that is a good game.

Thank you for playing my game, and thank you for the feedback. The gameplay idea is that player always moves on the bass drum beat, and the enemies always walks on the clap beat. But you can always changes the played direction, but sometimes you naturally be able to avoid the enemies.

LikeReply
Shot out gamesSubmitted267 days ago(+1)

The unexpectedness factor is present at every time with the movement, the direction that the enemies goes and (maybe) the direction the player goes when is cornered and you don't press another direction.

I liked the music a lot, I just think the game was very slow. You have to wait the beat to move, which gets a bit slow at some point.

I liked that you move at one pace and the enemies at another. That makes you anxious (in a good way) and adds variety and strategy to the game.

Obs.: the game is very heavy for a 2D game with simple graphics (but then I see it is made in UE4, so it explains a lot)

Enjoy playing it, as an additional comment just to mention that on some occasions if I did not hold down the direction in which I wanted to go, the character would automatically go down.

Very cool! You managed to mixed up some basic aspects of diferent games and looks very good! Nice job!!!

Loved it! Agree with others that a visual indication of movement time would be useful, but that’s not essential. The game feels finished & well-polished. Awesome job!

LOVED THE GAME A LOT! I'm a big fan of rhythm games and I thought that this was a very interesting take! The tile-based movement reminded me a little bit of Crypt of the Necrodancer while the syncopated movement that happens at certain parts of the song reminded me a lot of Lockstep from the Rhythm Heaven series (in the game you had to alternate between downbeats and upbeats).

I love how you tied the movement of the enemies to the claps and you bet I played it allllllll the way to the end :D The way that the characters scale to the beat of their movement was also a nice touch!

Now I loved the game a lot and I thought that you did great given the time, but I'm really invested in this idea so here are some possible ways you can build on top of this already excellent experience:

It took me a bit to realize that I could eat the enemy when it was blue (maybe a more scared expression could help signify that that you can go after the enemies in this state).

Provide more player agency. There's a lot of downtime for the player in between each corner and there isn't much to do when there aren't any enemies around. This could be combat in a couple of ways. One of which is to increase the tempo of the song as the time dwindles down or as the stages progress (I noticed that the song changed but wasn't sure if the patterns were different). This adds more panic and forces the player to really think ahead about their movement.

Another way (and this requires way more effort) would be to have the player make the input to the beat of the song to move to the next tile (instead of automatically moving in whichever direction the player is facing). This would also probably warrant a lot more user feedback on when they can/should make the input (and whether their input was late or early).

You can also explore different enemy patterns like having enemies be active or inactive based on a call & response in the music or just have different enemies tied to different percussive instruments. I wonder how an enemy based on the melody would move 🤔

I love love love love LOVE rhythm games, especially games that take rhythm-based gameplay and mesh it with other mechanics. This game is really inspiring me to try out an idea I've been having in mine for quite a while as well :)

Thank you for playing my game, and thank you for the feedback. I'm happy you liked the game. And I am really happy to hear that it have inspired you, and I really hope you make that game.

Respond to some of your feedback:

Pretty fun, I like the idea of mixing <that game it's not supposed to look like> with a rhythm genre.

It would be nice if player could see upcoming beats, kicks and claps separately, to be able to react better (if keeping it hidden wasn't intentional).

The music syncing was neat!  Also a nice touch having the enemies move faster / on different beats :)

I love it, very simple but with nice touches =D

I could finish the level with one heart remaining... I may have panicked a bit to get my last points haha 😄

Submitted
The Legend of Belda
LikeReply
AsimSubmitted272 days ago(+1)

Game does feel a bit slower than the other game that shall not be named but I love the game sounds in this game alot more.