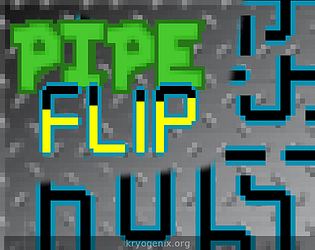 Only got to level 5 before I couldn't take much more, haha. When I saw it I thought it'd be a nice simple game where you just join the pipes, then I find out I have to switch 5 pipes at a time! At least I only had to get to the end, for a while I thought I had to stop the liquid spilling out as well, after the end. It's a really cool concept, but I feel it should be introduced more gradually with earlier simpler puzzles.

And I don't know why I'd suggest making this harder, lol, but something I was thinking while playing was that maybe the liquid could speed up the less pipes it's got to fill? Like, if it hits a dead end early, it fills faster elsewhere. So it's like a fixed amount of water entering the whole system.

Thank you! Yeah, part of the feedback that's been most useful is that I need to tweak the difficulty curve, or more accurately stick a big knife in the difficulty curve and redo it from scratch :) Something definitely to look at after the jam finished. And I like the idea of the fixed amount of fluid entering; I'll have a think about that one!

An enjoyable experience with hard puzzles (at least for me). Remembers me the game: Pipe Mania. I liked the graphics and the music. The theme played after winning feels a bit disconnected from the rest of the elements.

You already played our game: Blind Bird, so we can't do anything but thank you. 」(￣▽￣」)

Thank you for the review! And the feedback about the winning theme -- it is a bit out of place, I agree, and it should be something different :-)

Wow, there's some hard puzzle here! A 'Continue' options would be great.
Nice evolution of a classic concept. I like it!

Thank you! I did think about a "continue" option -- the main reason I don't have it is that I couldn't see anywhere obvious to put it in the UI, but what someone else suggested is a whole new screen for "level select", which is a good idea and is probably the way I should solve this in future versions!

Wow, that was hard, took me a while to understand how to solve the levels, I was trying to make a quick path to the end to win. Once I understood how the levels worked I god to level 7 before I loose. I had a lot of fun in the end. Good job.

Submitted
For the Demon Lord
LikeReply
Stuart LangridgeDeveloper4 years ago

Thank you for the review! Level 7 is roughly as far as I can get too :-)

I thought this was gonna be a simple pipe fluid game so imagine my surprise when I go to rotate a pipe and the other four connecting to it rotate with it. Then I notice that the fluid flows in two directions. I really enjoyed those twist on this simple game. My only gripe was I wish there was a level select so I could skip the levels I'd already beaten.

Thank you! Yeah, a level selector may be a good idea; I did originally plan to remember the level you reached and restart from there, but I didn't have a good way to add a "reset" button into the (already rather cramped) UI. But a level select screen would work quite neatly, especially if there were more levels in a tutorial stage. Thank you for the feedback!

That's a nice take on the 'pipe-game' puzzle game! Quite challenging, but also quite satisfying to play, and the puzzle design was really well done and thought! Until you "get" how to play the game, I also feel that some help would be nice (how you can "chain" turns, etc.), but it's pretty visible how you made the levels in a way that, after some time, you just automatically guess the right way to turn them pipes!

I liked the interesting take on pipedream here. It's funny that even at 64x64 it feels like there's a huge amount of pipes to try and connect up - almost overwhelming considering the first level helps you out, and the second level just throws you in at the deep end!

I'd again echo the tutorials or easier levels where there's perhaps not as many pipes to switch around to ease the player in?

Thank you for the review! It is indeed becoming apparent that I need to tweak the difficulty curve a bit :-)

Whoo buddy that's hard! Great idea and well executed. I wished the curser where the pipes will flip was a solid outline. Some of the fonts looked like they were anti aliased and might look better sharp.  Great submission!

Thank you for the review! Useful feedback; I think the solid outline might be better too, having thought about it a bit (it would fit more in with the pixelated nature of everything). I prefer the look of antialiased fonts, but you're right that having both those and sharp edges looks a little inconsistent. Something to think about...

Thank you! It is indeed difficult :-)

Excellent puzzle concept - I'll echo previous comments that a more gradual introduction to the mechanics would be helpful. Understood that 'difficult' was in the description, but I'm not good at games like this as is, so i felt a little stumped pretty early on. Loved the music / sound effects, too!

Yeah, I think I'd add that more gradual ramp up if I did this again; the feedback on this has been instructive. Thank you for the review!

Very well thought game! difficult but I feel it's supposed to be, took me a while to go past level 3 and got stuck heh.
Maybe I'd change the victory music for something more subtle. Also I'm sure if instead of retrying from level 1 it would restart from current level it would seem a lot easier :)
Great entry!

Thank you for the review! Yeah, I think the feedback has been pretty clear that I need to get better at audio choices :-) I did actually think about resuming from the level you got to, but I'd also want a "reset and start again from level 1" button and I couldn't find room for it in the UI! So that's why that's left out. I'd probably add it if I did this again, though...

It's great to realize a tube game in such a limited space. I had technical problems from time to time while trying it out.  (suddenly everything rotates, tubes in the main menu, sound glitches)

Perhaps it's my browser fault :( 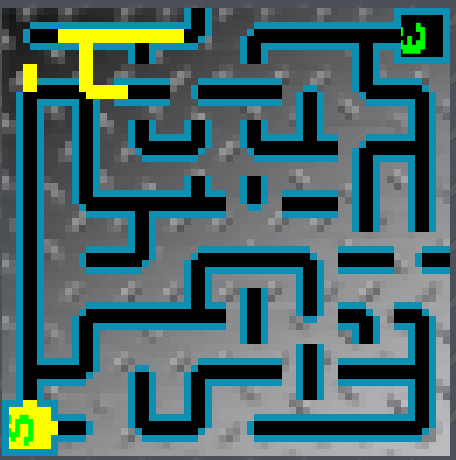 Still had fun solving the puzzle.

oh dear! That's not supposed to happen, of course. Can you tell me which browser you're using? And if I can replicate the problem I'll fix it.

I'm using vivaldi. Try to check for drag instead of mouse click.

Good game - and extremely difficult! Might be good to ease the player in  a bit more gently with a couple of tutorial levels or easier ones. Good graphics. As others have noted, the music doesn't fit the game but is ok.

It is indeed difficult -- I can normally not get past level 7 or so myself! Thank you for the feedback -- I did think about having an easier on-ramp, but in the end decided it would just be hard. I think I'm the only person who thinks the music fits, which is also good feedback because it says to me "Stuart, don't trust your music choices, get more people to playtest first and ask them next time" :-)

Nice to see more puzzles in the lowrezjam! :)

I like this game very much. It's a good puzzle game that is challenging yet intuitive, I like that it is touch enabled as it makes a great game to play on smart phones. I'm not sure how I feel about the gothic-type music playing. The music itself is good but I'm not sure it fits the game, for me at least, perhaps just something more arcade-style?

Thank you for the review! I appreciate the comments on the music; I went backwards and forwards on whether I thought it was the right tone or not :-)

I'm VERY bad at these games (I was lucky to make it past the first level lol), but I really like this game's design.  Music is good, very nicely composed, though the minor scale might be a bit too sad for this kind of game... that's just me though, there's nothing wrong with the music itself.  My only real complaint is with the pipe highlighting - the green overlay is a little too subtle; it's hard to see what pipes are selected.  Maybe alter the color of the selected pipes?

That's fair comment -- I'll have a think about how to highlight the pipes that will change a bit more obviously. Thank you for the review!

A good revision of the classic pipes games with a twist: multiple pipes rotating at the same time.

I couldn´t get past the 2nd level, but it was a nice game. What I found a little bit frustrating is that I couldn't know which pipes will be rotated when I click. Maybe you could add some form of highlighting that is applied to the pipes, depending on the mouse position. I think that could improve the 'planning' phase, which is something I think enhances the experience you want the player to have.

Music was nice, nothing too fast-paced and fits the gameplay.

Good idea on the highlight! I'll have a look at doing that. Thank you for the review!

... and highlighting is now subtly added.

God, I got use my brain to play this one ahah. It's very interesting tho, I haven't played a pipe game in long time. I gotta say this game is pretty cool, and background music is also pretty good. Well done.

Thank you for the review!

Interesting idea, broke my brain a wee bit for a while but I got the hang of it, tending to try and find places where a cross of five pipe pieces were clearly out of place all at once. The presentation's kind of crazy, but I'm really fond of how in-your-face it is! A couple of issues with 64x64 adherence though, eg pipe rotations were too smooth, but it's not a major hindrance because the game is clearly intended for 64x64 and fundamentally works at that resolution.

Thank you for the review! The rotation is indeed a bit off, but CSS tragically won't let me rotate in pixelated steps. It's correct at 64x64, as you note, which is how I justified it to myself :-)

I was going to comment about the 64x64 constraint too, but did you actually made the game using actual HTML? That was insane! 😅

Yup, it's HTML and CSS. (The flowing fluid is drawn programmatically with a canvas, but everything else is HTML and CSS.) Thank you!