For the Demon LordView game page

Game made for the 2018 LOWREZJAM
Submitted by jangames — 21 hours, 22 minutes before the deadline
Add to collection 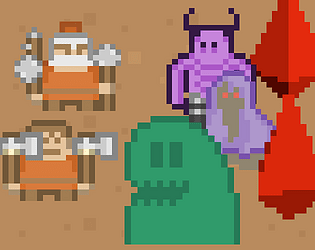 For the Demon Lord's itch.io page

This is more detailed than I thought it would be at first. It's essentially, tower defence; you're attacked by an endless wave of heroes aiming to smash your collection of crystals, and you create monsters to fight back against them; your monsters are confined to the square they're on, but you can upgrade them with points. Points (well, "souls") get generated by your crystals, so you have the normal tower-defence decision to make, of "do I have a whole bunch of quite rubbish monsters", versus "do I have only a couple of monsters but upgrade them continuously until they turn into the Hulk"? And I'm not sure which is actually best here, which is a good sign. The upgrade tree is complex, though; all created monsters start as a blob, and depending on which of their stats you upgrade, they turn into a variety of different monsters, and I never had a very good handle on which collection of upgrades turned my blob into a mega blob, or a skeleton, or a demon. It would be good if there were some sort of on-screen indication of where the next upgrade or upgrades will occur and what they might be, so I can choose to evolve in a different direction without having to try to make notes about what the upgrade tree looks like. One of the upgrade paths even leads to crystals, interestingly, so you can breed more crystals to get more points, thus regaining your power source after the heroes have destroyed some of them. This is a good mechanic, and I liked the ideas behind this game quite a lot. It suffers from the 64px restriction, though; the playfield is bigger than the screen, so you end up scrolling around the battlefield while looking at it through a pinhole, which is pretty annoying. But that doesn't affect the core gameplay much, and I like the core gameplay. Nice work.

Also, since I'm a developer and all, I thought, hahaha, I'll just stop the game in the debugger and give myself 100,000 souls and then I can upgrade everything and win massively. I was rather crestfallen to find out that the hero generation rate is actually tied to the number of souls you've got, so my little hacking adventure lasted about a minute before an unstoppable wave of hero death overwhelmed my monster force faster than I could upgrade them or add reinforcements. Very clever, developers. :-)

Wow, thanks for playing and the huge feedback. I had an idea about a evolution tree but I really like the idea of giving player feedback in the upgrade window, showing possible paths. I kinda want to keep some of the mystery of the evolutions, so maybe only after you have evolved to that monster at least once.

I'm glad you liked the game and I agree that the resolution get kinda annoying in the long run, I want to keep working on the game because I liked the core mechanics, I will definitively remove the resolution restriction. I laugh a lot with your story about trying to hack the game, the heroes have a soul and time requirement for balancing purpose but I never though about somebody editing the souls.

So I played it thinking it was quite constrained at 64x64.

Then I read the comments and realised you could scroll the map, tried again, and had a better time with it. Though to be fair, I'm not sure how you could show that the map can be scrolled within the confines of the game without explicitly pointing it out in a tutorial pop-up or something.

Either way, enjoyed the game!

Thanks for playing and the feedback, that happens a lot, and the wall of text below the game doesn't help with this because everybody gets discouraged when they see it.

I enjoyed it. And kinda liked figuring it out without looking at the rules! It's basically low rez Plants vs. Zombies.

I did spend a little too much time in the stat upgrade menu and not looking at the game, but guess that's to be expected with the lack of space! Cool game!

Thanks for the feedback, when I started I wanted to make a Dungeon Crawler but implementing the AI/Pathfinding and also all the content was way to much work, so I ended up with this and it was inspired by PvZ.

At first, I got a bit discouraged by the fact that there was no tutorial or a main menu, and I had to read a wall of text to understand the mechanics, which I think would discourage a lot of people from playing this otherwise  fantastic game. I thought not knowing how monsters would evolve would be bad, but after getting a bit involved and discovering some new variants, I had a bitter defeat and I found myself at the score of 507 souls and 289 hero kills. If theree was a documentation to note discovered monster types, I think I could play this all night ;)

Thanks for the feedback, I agree that the lack of easy to read tutorial is a problem, the main mecanics took me way to much time and I was still finishing them 2 hours before submition. I really like the idea and I will try to iterate on it in the future. Probably without the 64x64 limitation so I can make proper menus/tutorials and interfaces.

139 souls, 79 hero kills. I hope this is a good score for the first play ahaha. I liked the game and I'm gonna play it a bit more after this rating. I like the fact that it goes directly to the game. the gameplay it's not complex. I just have to point out the fact that the camera doesn't move properly, but aside from that, well done!

Thanks for playing and the feedback, 79 kills is a nice score for a first time, I didnt have enough time to balance it so the game gets a pretty big spike in dificulty after a couple of minutes.  I checked your submition and left a comment. Cheers.

Fun little game. I didn't read the instructions so took me a while to realise the map scrolled. I thought I was kicking butt, except I was restricting myself to the initial 64x64 grid.

Same thing, ahahah. Then by mistake I pressed the left button of the mouse and move it and the map just moved. I'm gonna take a look at your submission too, I hope you see mine jk

Thanks for playing, yeah, a couple of people had that problem but I never got the time to think how to and then implement something to let the player know they can scroll the map.