Aaaah that makes a lot of sense. Is it mentioned in the game? There is a lot of text and I might have fazed out while reading due to headache today, haha.

Woot, completed. Level 5 and 6 are very suddenly hard, haha. This is a very good game, and the perfect length and difficulty for a jam game I think! The graphics are nice and clear, and the sound is cool.

I wondered about. Followed someone's trail to nothing. Broke some gravestones? Killed some zombies? Then eventually slowed down and died in a ditch? I have a lot of questions, haha.

It's actually a nice little experience, the world is nicely crafted and looks pretty cool. The goal just seems obscure and then you die. A good mataphor for life in general I suppose!

Cool, I gave it a play! I'm not very good at precise platforming, but I managed to beat a level after a few tries, haha. Actually, I forgot to run back the first time I planted a bomb, second time I did. I tried tower mode, and it's definitely harder! Game looks good though, pretty solid!

Am I dumb for being stuck on level 2? After the ladder plant bit, there's a rock and a drop (where can I go with the rock?), then a plant I can push off but then there's the fast shooting guy... I feel like I'm missing something! I don't wanna rate if I missed something obvious, haha.

Ha, funny you should say that! Cause I had this idea for creating a squad-based shmup. And pre-jam when I was doing research, I found out about that game Mercenary Force/Tenjin Kaisen. And after that it did influence me a bit. But just because it align so well with what I already had in mind. Especially in terms of art styling; the bridges, buildings and the simple 2-frame animations. I have no issues with your comparison, because it's exactly true! :)

Thank you. And yeah I was told it was a little slow, and I tried to improve as much as I would dare. In my mind was also that it's ultimately a jam game; I'd rather people play an easy version they can see the whole of, than a more challenging version they might give up on.

The art in this game is fantastic. And the sound is pretty good and fitting. I beat level 1, and tried several times to beat level 2. It's simple, but it does feel like you're sneaking around a dystopia, how you have to avoid being seen by both guards and the kinda mindless workers in this dark shadowy setting.

The problem is that I don't know how to tell if a guard is just off screen next to a column. It happened so often that I'd roll to the next column right into a guard, completely unable to tell. So it just felt a little up to chance, which is annoying because I actually really like this game otherwise!

Other than the text being blurry it looks pretty nice. Not clear on what do do though. I can't do anything with the bananas other than pick them up and put them down? I tried to throw them or something but it just dropped and I can't pick back up. And I get shot if I go near the big guys.

I guess you can't actually lose in this as I just kept respawning, and I died like 4-5 times. I like the simplicity. The art is really nice but I'd like the player and enemy bullets to be more distinct from eachother.

I like it, but sadly I can't seem to progress. I think I'm supposed to position the seed balls in a way to grow towards a higher platform, but when I get it almost right the gap is too small or I keep sliding off. So I'm a bit stuck there, or maybe I'm completely missing something else I'm suppose to do first. (the bit that I just noticed in your second screenshot is where I'm stuck) I can try again later.

But otherwise, it looks and sounds good!

Should put a little bit more information on your game page to explain what is currently possible in the game, and your initial goals.

I spent so long forgetting where the mushroom was, while I had one in my pack the whole time. I knew I just needed dash. After that it was fine, haha. But in total the game took me 20 mins! I missed 3 recipes which I suppose I was meant to just mix random things together to find? I just found it a little long to keep going out and gathering.

I like a lot about this game. And you have a palette selector, that's neat!

Wasn't quite sure what to do here. I planted some crop and it became corn but then I didn't know how to harvest or what to do. I tried going out into the wild once and just got owned.

Off the bat though, there's too many controls for a GB game, and I had to keep checking to see what they were while playing. And there's keys that do nothing that are mapped to the GB overlay, which was odd. And also more than 4 colors.

I found it quite difficult to select the area I wanted to actually do something as the box is off-center.

Wasn't quite sure what to do here. I planted some crop and it became corn but then I didn't know how to harvest or what to do. I tried going out into the wild once and just got owned.

Off the bat though, there's too many controls for a GB game, and I had to keep checking to see what they were while playing. And there's keys that do nothing that are mapped to the GB overlay, which was odd. And also more than 4 colors.

I found it quite difficult to select the area I wanted to actually do something as the box is off-center.

I won in 131 days. It's a really nice kinda idle game. Very consistent style and I like the slidey menus.

Nice game with a lot of variety and challenges!

I think it'd be better if I got another chance at the same level I just died on, instead of going back to the menu and starting another random chain. There isn't much introduction to sword slash and double jump, for example, so that when you actually need to use those quickly it's a little bit of a panic.

I like the story. That last pot is mahoosive though! TBH I didn't actually notice the lack of SFX and the music filled a lot of the space, so that wasn't a problem for me. The graphics are very nice. I think the controls are an odd choice as it's all on my left hand, and my right is left hanging.

I did the programming and art. I worked with a musician for the music. I'm glad you like it. Honestly I'm so used to making bad/half-arsed games that I actually really wanted to make something decent, so before the jam started I planed out what I wanted to complete on each day. I already knew I wanted to make this kind of shmup, the theme changed a lot of the ideas but otherwise I was able to stick to the plan pretty well. Thanks again for playing! :)

Yeah, I'm using SFXR for all my SFX.

My main guy and his squad. 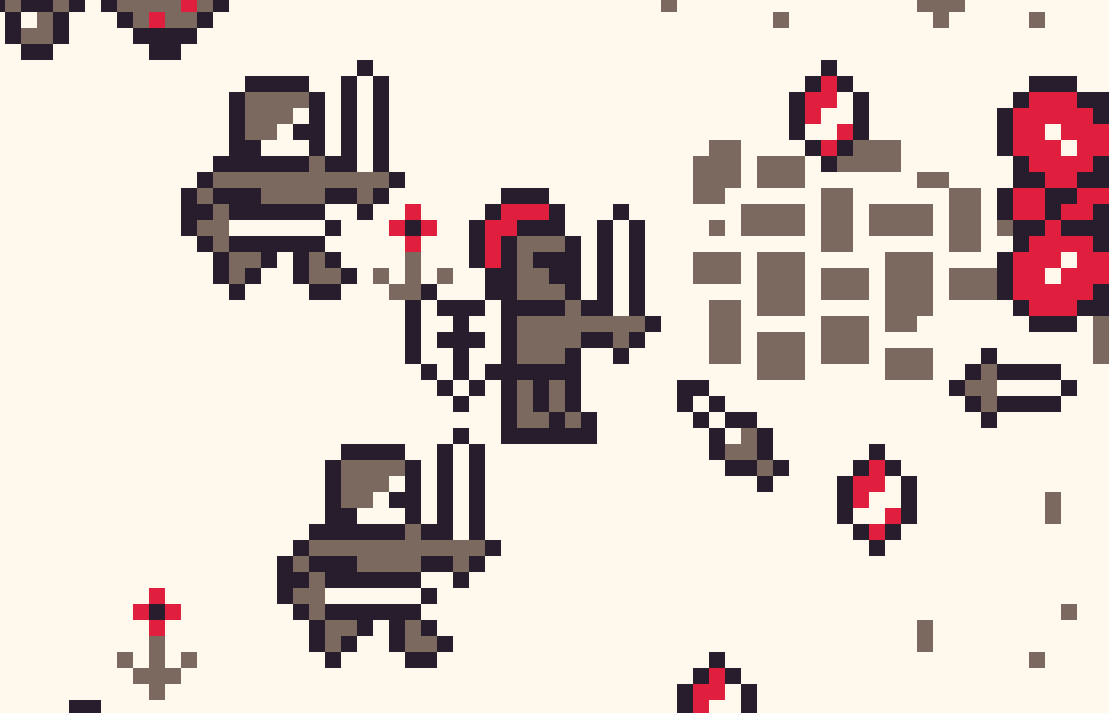 I am working on a more complete version. Slightly higher rez, much larger world (with route choices), meaningful card collection, "spell" cards and a not-totally-broken-and-exploitable gameplay. I'll definitely be sure to let you know, probably on Discord, when I have something more playable. :)

Attack is a tricky boi. But for as simple as it is it's pretty good!

Ha, I sucked at this but it was pretty funny!

There IS music and sound effects... Not everything has a sound effect but they're definitely there.

I didn't have enough free time to implement saving, and tbh if you get it then it doesn't take long to complete. So it also boiled down to the utility of a save feature which in this state wasn't much. The stalemate bug exacerbates this though, which is unfortunate, as I also didn't expect that to be so common.

I am continuing work on the game, so I can at least promise you that the next release will be a lot better, haha!

It's perfectly fine as simple as it is, but some wrapping and polishing would go a long way here; menu, start countdown, etc.

I hope to have a good solution to stalemates once the proper cards are implemented. It seems to be the most common issue!

I like this concept. And how having it do the work for you is down to your own design.

OK, if you can leave a comment on your rating page that you just done this that'll be great. :)

Arachnophobes: What's the best way to stop spiders crawling into my mouth and eating me from the inside while I sleep?

It was almost 64x64, minus the vector stuff like the line and text.

I didn't quite understand the cost, does it just not apply? Very unusual tower defence.

I only got the stage 3 or 4 I think it was. I couldn't get up the double wall jumping bit because the guy wouldn't go far enough and would just grip the wall again. Then there was a wee lag spike and I fell in water, lol.

Otherwise is looks and sounds great.

Very nice little game. I did struggle with moving a bit, it'd overshoot where I wanted to be a lot.

A good looking and good sounding game! It's very difficult before you understand everything, then it swaps over to too easy. What would have been nice is a title screen just so you're not flung into the game without a choice. And obviously more maps would be lovely but I understand you had limits in PICO and that I imagine was a whole new challenge you didn't expect! :P