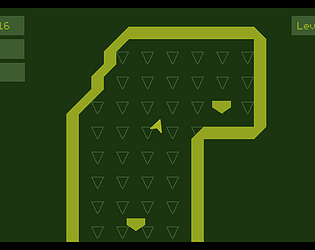 How does your game fit the theme?
There are different gravities in each level.

Very well executed and fun game. Had a lot of fun with it : )

Really challenging but I got super addicted. Love the mechanic, awesome work!

Very cool game ! I did not managed to beat level 4 but it really pleasant to control that thing :D
Thanks for the game !

Submitted
Too Many Bullets
LikeReply
rethunaSubmitted268 days ago

The physics is good which is the most important part of this type of game! I like the use of GB colors too. But just as a suggestion, maybe make it so that you win just by hitting the other platform? Otherwise the difficulty is a bit too high.

Interesting idea of switching gravity in different parts of the game! Still, landing turned out to be quite difficult for me and I think it would be cool to see gravity direction just to give players more visual feedback.

Thanks! The gravity direction is indicated in the background with the triangles and circles. But maybe it is not clear enough.

Oh, true, that makes perfect sense! Not sure why I didn't notice that at first.

Level 4 is my maximum… The inertia on the rotation of the spacecraft is really hard to deal with and the gravity modifications are really steep. That's a fun game but it needs more polish :)

Thanks for playing! I am working on polishing the game now.

Really cool game, at first i thought it's a top down game, so i just holded w and tried to race to the platform, after few failed tries i realised you have to land on it xd, gravity in first level could be stronger, because it felt like it's weaker than in rest of the game, also there are 2 audio problems, main menu theme seems to play only in left ear (played with headphones), and when you hold w and crash into a wall, after death you still go forward, but there's no sound of the engine, but overall really cool game

This is a really neat mechanic! I love the game feel and I think the difficulty is really nice for me. I hope you add more levels!

Interesting mechanic, but pretty difficult levels. I had to give up at level 5. Though, level 4 was already beyond the limit. The levels are difficult for three reasons: level design, gravity strength and landing requirements. The transition between different gravities is cool, but also hard. This mainly ties in with the very strong gravity. If you then also require the craft to be landed perfectly up right, then it just becomes too much. Change those things and you have a really cool game on your hands.

Thanks for this great feedback!

At first, I thought it was just a game like many others, but when the gravity changed, it became a lot of fun. It is a fascinating idea. I think there is a lot of possibility with this mechanic if you decide to work on it after the jam.

A unique concept and I really liked the color palette/ look of the game. The controls are a bit too "heavy" or too drastic though. But it's good that it proved to be challenging. Well done :)

Thanks! That is the color palette of the gameboy ;) . Can I ask you what do mean by "too heavy" controls? Do you mean that the lander feel too heavy? That the controls should be more reactive?

on a few levels it felt like I couldn't really change direction (or gain momentum to change direction). This is fine because it's meant to be challenging, but if you plan on expanding this maybe making it easier to "have control" (which is funny because that's counterintuitive to the jam theme) can lend itself to a more rewarding player experience :) but overall I liked it!

Ok. Got it! Thanks for the feedback!

A little too heavy on the controls for my liking but I like the artstyle going.

Physics were a bit punishing, but it was a fun game and I like the concept. Nice job!

needs some music but nice job

Nice concept of regions for gravity. Agree with commenter below that it needs some extra juice and music. Really wanted to have more fun with it but it was too difficult for me! And to be clear – I love difficult games, but something about this was too frustrating for me.