OMG SUN EXPLODED AND WE ARE GOING TO DIEView game page

Try to escape exploding sun, while your engine is broken...
Submitted by Noel Dev (@NoelJasik1) — 23 minutes, 13 seconds before the deadline
Add to collection 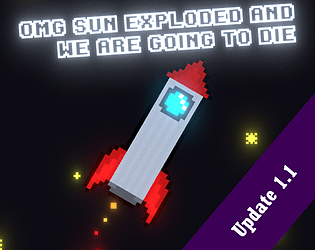 OMG SUN EXPLODED AND WE ARE GOING TO DIE's itch.io page

Ranked from 59 ratings. Score is adjusted from raw score by the median number of ratings per game in the jam.

How does your game fit the theme?
Engine of your rocket is broken, you don't have control over when it's off and on

Nice little game. A larger screen view would give better feel of space.

Great game, and fun too! At one point I thought "what's stopping me from turning around and going back?", but I quickly found out why :D

Nice consept, only think that miss was some indicator that will show  how the sun is close or far away, but maybe that is the way the game was intended, I don't know, just saying it.

Nice concept! I included it in my GMTK Game Jam compilation video series, if you’d like to take a look. :)

Hahaha I loved the name of the game. As for the game design I think that I would:
- Increase the field of view, so you have more time to see when a collectible is coming close
- With increase field of view, I would make some more dangerous props, like black holes which makes you stuck for a moment and make you lose fuel, etc
- Maybe tweak the velocity of the rocket

thanks for feedback, well there are actually black holes in the game, they just spawn later

Very cool! Though, a bit too easy as for my taste, even when not really looking on what's ahead I was more often hitting fuel tanks and repair wrenches than meteors.

Cool take on the theme! I was happy to see that you didn't immediately die when you hit a meteor, and by scattering random items in the level, as well as having an explosion chasing you, there was an incentive to keep moving and get better at the controls. Good job!

This game makes me go YES!

Bloom is a bit too harsh. I also felt that the sun is a bit too fast. After hitting about 3 asteroids and having them slow my progress to stop, the sun was able to catch up to me. This happened around the 80km  mark. Also, the black holes are so deadly! When trying to outrun the sun it's nearly impossible to avoid them since you need to go so fast. One hit and i was at like 20% health, and hitting another asteroid would have immediately been a game over.

A fun little game, though it felt almost completely luck based, expanding the games view or slowing down the scrolling would go a long way towards helping give the player an opportunity to make decisions.

I liked how the power came in bursts and it wasn't just always going forward. Simple but fun little game.

So much fun, the more i played, the more I learned to control my ship. Tokyo drifting in space be like...

The mechanics were simple but the gameplay was really addicting! I had a great time. I think the scrolling speed is just a little too fast, it makes your success based more on luck than skill. But overall great job.

Not bad! The polish on the graphics were a good way to make the game look a little more distinct. For the gameplay, I wish the ship wasn't in the center of the screen, but more of a third of the way up from the left. That would give you more time to react and make the game feel less like luck and more like skill!

Submitted
Please Don't Do This
LikeReply
Noel DevDeveloper2 years ago

Thanks for the suggestion, just tested it and it plays much better, such a  shame i didn't test it during the jam

Was fun, but I felt it was more a game of chance than skill. Once objects get to the screen, it's already too late to react and change direction to hit or avoid them. And if you try to go back to get the items you need but didn't spawn in your way, the sun eats you up. So it's about going randomly forwards and hope to win

Submitted
Too Many Grenades
LikeReply
shuriken2 years ago(+1)

What OS do you have, and have you tried desktop build?

Submitted
Without A Paddle
LikeReply
Jibson2 years ago(+1)

My high score was 145! I played through 3 times because I really enjoyed your game! My biggest complaint is that I didn't feel like I had any time to react to anything. I felt way too zoomed in and with my high speed I was not able to plan my movements around what was coming at me. I definitely felt out of control, but from more of an unintentional perspective rather than an intended game design perspective. I think if you zoomed the camera out, that would fix this issue. I also felt that the sun came up too fast. If you had some kind of meter that showed how close the sun was to me, similar to the meter that showed how far I made it into the level, it would be very helpful. Also your song choice was great! Thanks for the game

Unfortunately, the sun ate me before I could reach the shelter... Fun game though!