Wowie Jam 2.0! community · Posted in Polished version of your game
OgelGames115 days ago

I just release an updated version of my game: https://ogelgames.itch.io/ant-apocalypse/devlog/122043/update-v020-post-jam-update

I plan to release the source code at some point, but I don't expect it to be anytime soon...

Really nice looking game, and really polished! Would have been better if the platforms (that you jump on) were more visible.

Thanks for the feedback, I will try to fix that for the post-jam version ;)

Really nice unique game, I only managed a few crashes, but it was really fun to play :)

Thanks, I definitely agree there there are places I could add more "juice", which I will be doing for the post-jam version :)

Amazingly fun yet simple game, and nicely polished too!

Really nice simple and fun game, and putting it in a little console made it even better!

Fun little game, the questions got a bit strange towards the end, but otherwise it was really good!

Great concept, but I found it impossible to play with an invisible cursor, and the enemies were overpowering. Also the game didn't restart after dying, I had to go to the menu to restart. Everything else was great though :D

Reply
Wowie Jam 2.0! community · Posted in I will play your games if they have less ratings than mine.
OgelGames120 days ago

Currently mine only has 14 ratings: https://ogelgames.itch.io/ant-apocalypse

I'll try to play your game too if I have time :)

Thanks, a score counter is one of the things I wish I had added, but I didn't think of it in time :(

As for an effect of sound when an ant is killed, that was something I originally chose not to add because it wasn't realistic, but I later realized it would have been better to add it.

Both things will be added for the post-jam version, which I hope to release in a couple of days.

Amazing! The mechanics were great, everything was polished perfectly, the only category I didn't give 5 stars was the topic, just because it didn't utilize the player being a bug in any way.

Nice game, really good interpretation of the theme, and fun to play too!

The multiple different resolutions of pixel art doesn't look good IMO, and the sound is a bit on the harsh side, but all the mechanics work really well.

Reply
Wowie Jam 2.0! community · Created a new topic Play my game, and I'll do the same for yours!
OgelGames122 days ago

I didn't want to make one of these topics, but as of writing my game only has 6 ratings, so...

Play, rate, and comment on my game, and I'll do the same for your game! :D

Cool game, the parallax background adds so much to the polish, with out that it wouldn't look nearly as good!

Reply
Wowie Jam 2.0! community · Posted in Send me all your games
OgelGames122 days ago

If you've still got time, here is mine: https://ogelgames.itch.io/ant-apocalypse

I'll play you game too of course :)

I generally prefer native games myself, but I don't really care as long as it plays properly.

In fact that was the main reason I didn't make a browser version of my game, as there were a few things that needed changing to get it to work correctly... :(

There will be a browser version when I update it after the jam, but for now it's windows only: https://ogelgames.itch.io/ant-apocalypse

Really fun concept, it really could do with more feedback for when health is lost, but otherwise a really nice game!

Reply
Wowie Jam 2.0! community · Posted in I will play your games if you play mine
OgelGames122 days ago

I used Unity and C#. I've thought about using other game engines, in particular Godot, but I always go back to Unity just because it's what I know.

Not sure why, but all the text boxes were blank for me...

I still managed to get to the end though :D

Amazing game, I managed to get my time down to 1:18, but it's so fun I'll probably play it again to see if i can do it quicker :D

The speed of the player did seem slightly too fast, but to be honest I think that's part of what makes speedrunning it so addictive...

Nice little platformer, though the controls feel a bit slippery.

Nice game, really could have done with a few sounds to go with the animations though.

Also, maybe add something that gives a hint after failing to craft some number of times, as I wasn't able to get more than 12 of the items, no matter how many combos I tried...

Great game, really polished for a jam game! Playing it seems a bit confusing, it starts out slow and consistent, and then suddenly the food and water bars go down really fast and I lose...

Also, not sure if it was intended or not, but sometimes the money goes down to zero by itself, and then only goes slowly back up for the rest of the run.

Really nice game, great visuals! Some parts of the platforming are not very obvious, but otherwise it's very fun! Good work!

Will play yours as soon as I can ;)

Simple and fun game, but the controls didn't really fit with the way the obstacles were layed out, would have been better with defined lanes you can switch between by tapping.

Nice game, the platforming/jumping needs some improvements, but otherwise it's all quite good.

Thanks! Except for the grass tiles and music (as credited on the game page), everything was done by me, yes.

The sound effect for player damage is inspired by the old Minecraft sound, as I thought it would make more sense for an ant bite than an impact type sound.

Thanks, yes it does need a bit more balancing, I didn't have much time for play testing before I submitted ;)

Do you have any suggestions for what kind of sound should be used for the bugs dieing? I thought about added a sound to it, but I couldn't think of anything suitable.

Reply
Wowie Jam 2.0! community · Posted in Want me to play your game? link it below!
OgelGames124 days ago

Neat little game, I had fun with an auto-clicker after I played it for a bit :D 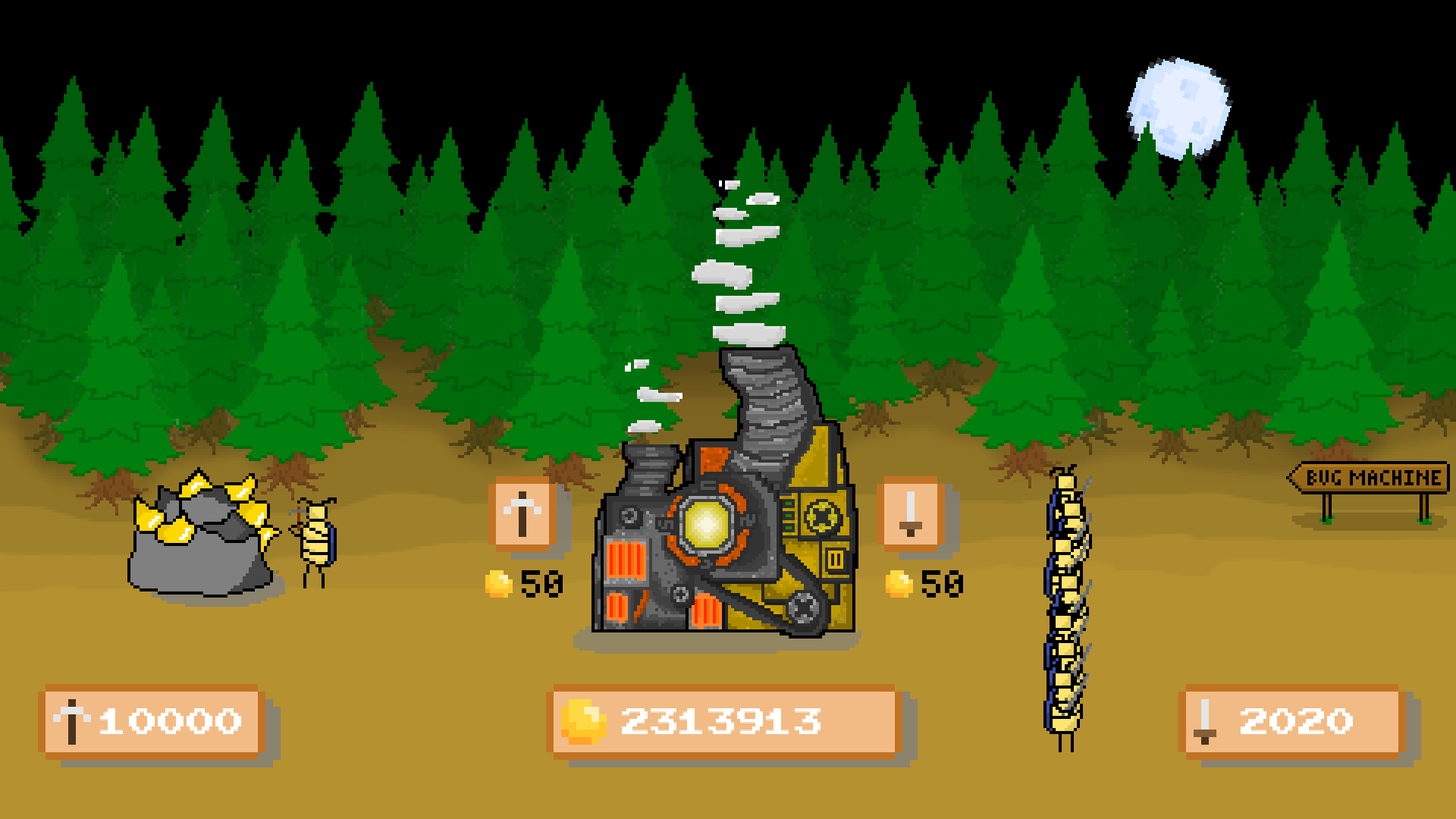 Definitely needs some balancing, I got to a point where I was earning gold faster than my auto-clicker could spend it, so increasing the cost of pickaxes and swords would probably help with that.

Amazing game, with a simple but unique mechanic that was very well executed!

Only thing I would change is to add the timer and death counter in the main part of the game, so you can see how well you're doing as you play.

Reply
Wowie Jam 2.0! community · Posted in Rate me to rate you
OgelGames126 days ago

Thanks for the feedback ;)

What part of my art is not the same resolution, I thought I made sure it was all the exactly the same?

I'll add your game to my list to play ;)