Control a Magical Genie on a fight against a swarm of Scarabs, while your fool Master Human makes wishes out of control.
Submitted by Ruhan, Alex Baluh, NarcisoRosario
Add to collection 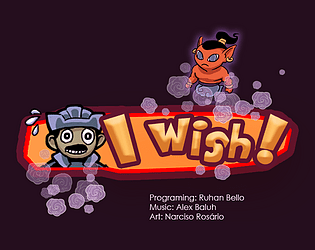 How does your game fit the theme?
You control a Genie from a magical lamp. Your owner human constantly makes wishes to you, changing your form. The forms are out of control: you need to accept the form that was asked by the human

i felt it was a little more difficult than it should be, or maybe it was because i was trying to aim with the mouse and it wasnt working. is there an option to use J or K for attack instead? That would help me get it through my thick skull that I cant aim with the mouse in this game

The artwork is really great. I like the overall mood of the game, with the funny tutorial! It's nice that you can have many forms, each with its own playstyle, and I would love to see more of them! Well done!

Really silly game! I was literally laughing almost the entire way through at some of the presentation and the absurdity of what was happening.

I think the WASD and mouse shooting controls felt a bit weird considering the genie always shot where he was facing when I've been so heavily conditioned by a lot of other similar games to expect Mouse = shoot to shoot where the mouse is hovering.

I also think the genie could use some more varied forms that did more drastically different things but that might've been too much for a game jam!

Thanks a lot for playing and me and the team are reeeally happy about making you laugh!
Indeed! The shooting mechanics is something that is off on this build, and we do have plans for decoupling the aiming from the movement

As for more forms variety you're right -- it was too much for the jam, but we surely can do lots of creative stuff with new forms!
We also planned other types of wishes: the human could ask for the scenario to change, could transform the enemies into other stuff, and so on, so we're pretty happy with our result, we think it has nice game design openings. And we're happy that it managed to fit the jam theme as well

Again, thanks for playing! =D

Very fun game to play. The wishes of the person were amusing. Both the art and music are beatufil. Maybe it would be better if the aiming was done by mouse.

This game is very cool! I like it, it's a really clever concept that stands out! good job! rated! please check out my game too :D

Submitted
It's Over
LikeReply
Nickels777Submitted2 years ago(+1)

Lots of fun transformations! That silly person's wishes had me very entertained. The instrument choice is perfect for a genie game, and it sounds great. Your art is well made too!

Nice, this was a lot of fun. The different forms at different sizes are a great twist! Well done, guys!

Really fun concept and nice art, the gameplay also felt nice, although aiming the shots with the mouse could have been made the game a little bit smoother, but the rest is very well done, it could be cool to see a bigger game done with this ideia of being transformed as a genie. Maybe something multiplayer.

the artwork is amazing, the sounds are just right, and the gameplay can be a bit too fast paced at times, other than that i think it is a great entry, good job !

Really unique use of the theme. I like that there was a fair amount of randomness for the "out of control" bit, but it never felt like the player had no control at all.  One issue was that I felt like the master mechanic never really affected me. I basically just ran around shooting scarabs while ignoring where he was, and he just ran around gathering lamps while ignoring both the scarabs and me. Maybe he was afraid of the scarabs, but I couldn't tell. Good game though. One of the more polished, fun games I've played during this jam.

Hey, thanks for the kind words! The team will be happy to read it
And yes, the Master gets afraid when there are scarabs close to him, so you need to drag their attention or defeat them so the Master go proceed to the next lamp. The game indeed lacks of indicators for this and the tutorial also doesn't explain this specific thing, so I can understand your confusion!
But yeah the multiplier goes up to x5, which can drastically increase your score, that's why the Master is important. If we get to continue the game, I'll surely make this more clear
Thanks again!

That was super neat! Great incorporation of the theme and had a smile throughout XD If only I could hit our master...

Hahahahah, hitting your master to make him stop wishing for a while could be a nice mechanci xDD

Interesting concept and theme for your game. Problem is, and I know it can be complicated to foresee, but in top down shooting, you want the player to be able to aim while moving. Shooting (attacking) in the direction of the walk is only good for melee attack. I know it's a bit of a pain for the art (you have to have backward walk and stuff like that), but one easy way is to go around it in 2D is going for a 90 degree top down view like Hotline Miami. It's not as pretty, but it get the job done for a quick jam. Otherwise, you could still create a 2D top down isometric view in your spare time and use it latter. Top down shooter are quite versatile concept.

Thanks for the tips! Yeah, a full top-down view would make the work easier for a jam, so I'll definitely consider this on the next time that I do a top-down game for a jam

As mentioned by other reviewers, main menu looks a bit out of place (and I understand that; better to improve gameplay in the short amount of time you have) and transition animations are a bit too long. Click to shoot while not aiming with the mouse was a little confusing but I figured it out eventually. The difficulty curve is too steep though: it was hard to withstand a couple of transformations. Maybe increasing scarab spawn rate with time would help it. Also I noticed that scarabs managed to spawn right besides me, perhaps tweaking the spawn logic to make sure that there's enough distance between player and scarab would be nice.

Looks like I've written a lot of critique, but the game was actually fun and I liked it. Excellent!

Thanks a lot for the detailed explanations!
As for increasing spawn rate, we do have this, depending on how many time elapsed, the spawner does it a little bit quicker, but it's not easy to notice it as the game is very frenetic hahah

Yes, the sacarabs spawning some times is frustrating I agree with you, I'm thinking of making them always coming from some spots on the scenario, such as from the mouth of a snake statue and such

Again, thanks for the feedback and I'm glad you had fun with it!!

Really good game! I love your take on the theme: it is very original and funny.

From a graphic point of view it is also lovely, except for the main menu UI (totally understandable since there was very little time XD).

I really didn't understand why the attack command is in the mouse since I cannot use it to aim: personally I whould have preferred using the space button or something on the keyboard.

Good work anyway, keep at it!

Yeah you understand me regarding the main menu UI xD
And yes, you're totally right about the shooting button. I should have put it on space bar or some other keyboard button, indeed. The original plan was to have shooting in more directions, but we had plan changes regarding this, and I was so busy doing other stuff, that I forgot to change the fire button
Thanks a lot for playing it!

I totally understand: there's also too much to do and too little time XDanyway it is really a minor issue, that's still a wonderful game!

This game was good ! I liked the style and the idea was well executed. Really, good job !

Thanks! Me and the team are very happy that you liked it!!

Great game! I like the concept with the wishes and different abilities a lot. Maybe there could be a clearer indicater, when and where enemies spawn, as quite some times I found myself standing in an enemy spawn point. Maybe the enemies could come in through one way gates or something like this.

Got it! The gates idea is nice. We even had an art for huge gates in the shape of Snake's mouths, but didn't manage to put it in. Thanks for the tips and for playing the game!

I really liked the concept and it was great fun to play. I think with some more development time and some more polish this could be a really great game. Good job.

This game was a hilarious blast!! The genie concept was great, and all of the different moves were super fun to play with! My favorite was definitely the biiiiig salamander. The controls were a little finicky, and it was frustrating to have to fully stop to properly aim at the onslough of baddies. (Got killed instantly a couple of times because of that.) Maybe there could be an option to get health, post jam? Besides that, I had a lot of fun and I hope you continue working on this game in the future! Good job.

Thanks for the suggestions! I'll surely think of some some health collectibles, and maybe the Human can eventually ask for all enemies to be destroyed just to give you time to breathe haha. Thanks for playing!

I think the genie would greatly appreciate those wishes! Of course, this was a lot of fun. :D