Yeeeessssss ! I love Magic Eye pictures, never thought I’d see a game made with them!

Hey there! Sorry for the late reply, but I thought I’d answer this :) The most important thing is how to setup your background and banner, I’d recommend checking out Easy Releasy by Jannik Boysen 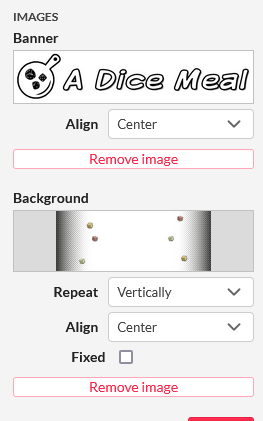 It’s brilliant! While being simple in appearance, the game has a lot of depth depending on the enemy stats, the dice you get at the start of the fight and the shape of the terrain. The mouse-only gameplay was very easy to understand and handle, so for me that’s another win!

I lost pretty quick (floor 2, to the Shield Hoarder) but that’s the level where I really understood the relation between the dice you get and the enemy itself :)

Haha I’m actually really bad at this! I feel like the mechanic is interesting but not used to its full potential: since you need to move constantly to not get hit, having the damage change depending on the face you’re on becomes more of an inconvenience than a strategy. But apart from that it’s agreat game! The animations flow nicely, the VFX and models look great and the sound is just right. Good job overall !

The main problem is the validation of the dice, I couldn’t use them if they didn’t land flat or if they clipped with each other. This made the game very hard, and even unplayable when the dice spawned inside each other several times in a row.

The rest are minor issues (spiders slowly flying off when you lose), but more feedback in general could be nice (getting hit, hitting an enemy, blocking…)

A common theme, with a good execution. After a while you can get a nice timing going, but there doesn’t seem to be a difficulty curve ? Welp anyway it’s nice, good job !

I gotta say, this is not a game for me… but I appreciate the work ! Nice player AI and simple-yet-interesting rules :D

The core gameplay was good, but it lacked a lot of polish. There were a few bugs that made the game very difficult to play, that’s too bad !

I loved the symbolism. I can’t describe the feel I got from playing this game, but it was good. I stopped pretty early though, I don’t think I could enjoy the whole scale of the tower… but I loved everything I saw :)

Loved it ! I struggled a bit with the mechanics at the start but got the hang of it :) I think the snake fight was especially difficult if you don’t know how to handle it.

But in the end good job on, well, everything !

Incredible. This is so polished ! The pixelart is super clean, the movement feels good and the idea itself is simple but very well executed !

I had a hard time on my 3rd run, after getting 5 ones in a row xD

That was amazing ! Very good puzzle design, I loved it :)

Hehe, thanks a lot ! That’s exactly what we were aiming for, thank you so much for playing !

Hey there ! Yep, this is an easter egg I hid in the level for people who figured out how to use that technique. And don’t worry, it’s not really a bug (a bug would mean it doesn’t work as intended). I can make it impossible to use, but chose not to because I like seeing people discover and use it !

Hope you still enjoyed the game ^^

Thanks for playing, and for reporting these problems ! I agree the second boss could be harder, changing the pattern system of the boss also introduced issues with the timing of the patterns.

About the performance issues, it happened a few times to me too during testing - I’m very sorry it happened to you, and hope it didn’t make the game unplayable ! I may have a idea of what’s causing them, but didn’t have time during the jam to fix it

Interestingly, I did nearly the same in Godot ! A tutorial from KidsCanCode recommended to use an AnimationPlayer to toggle the collider on and off (since in Godot everything can be animated) so you don’t need to write code to toggle it. Since my gameplay components were split among several scenes, it was simpler for me to use a timer variable though.

I was very generous with the hit collider, but I think it was the right choice - it fits the animation well and gives a bigger feeling of control to the player. 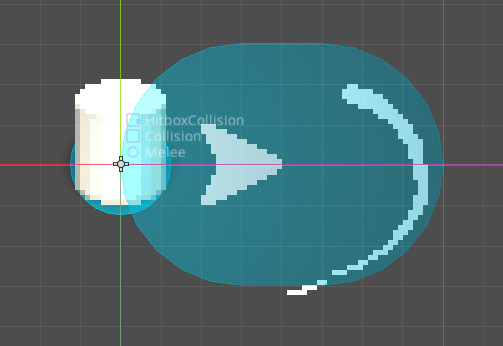 Now, a thing I discovered and used for the first time during this jam was object pooling ! In every engine and language, creating a new object has a cost. In Godot, since you’re often loading other scenes (which is similar to prefabs in Unity) this cost can be reduced by loading the scene at the start and instancing it when needed. But even that is slow because the instance needs to be added to the scene tree.

For a single object that is only created once, or created multiple times but at very large intervals, this is perfectly fine. But in a bullet-hell where hundreds of bullets are created each second, this will slow down the game extremely fast !

In our game, we have a bullet-hell boss that shoots around 10 bullets/s. The player’s bullets use instancing, but it wasn’t gonna be possible for this boss. The solution to this problem is bullet pooling: You instance a set number of objects at the start of the scene, and just show/hide them when needed !

Here’s how I do it for the Flesh Monolith: 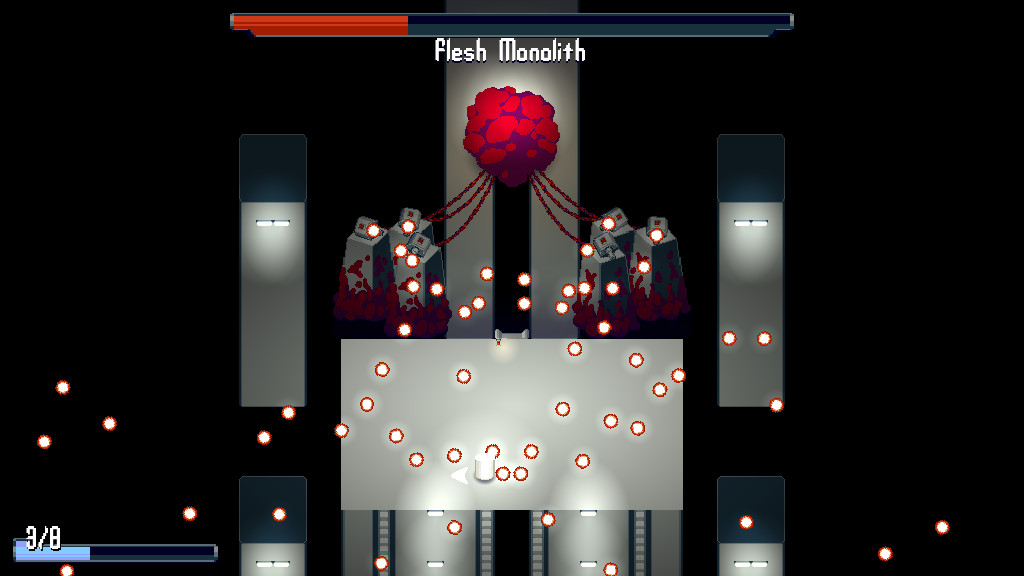 If you instance enough bullets at the start of the scene, it will be unnoticeable ! There’s also a version where I switched bullets from a pool_available to a pool_process array, but reindexing the array every time wasn’t the best idea.

I really liked it ! Very nice art style, basic but nice shooting. I do have the same issues as the other comments (strange hitboxes, not very boss-rush…) but it was still a great game.

That was very nice ! It took me a few tries to understand how to beat the snake boss, though I found a trick to make it stuck in a corner. The second boss was amazing, the mechanic was interesting, original and was explained well. Good job !

Note: As I said to another dev, you might want to check the “Windows” option on your uploaded file. It will help people find it, and will allow players with the Itch app to install it with 1 click instead of having to download the archive.

Damn that was hard ! But the concept is amazing, I loved playing this game despite the difficulty. The music and sound hurt a bit though.

The game looked great, but there were a lot of problems with the gameplay. Mainly a lack of audio and visual feedback (when you get hit, when the bomb is about to explode, when you manage to hit the boss, when you need oxygen…). It’s too bad, I hope you take some time to polish it !

I really liked this game ! No sound though, and near to no feedback when you get hit or hit the bosses. Also, the hardest boss was the BoomBox, since you could dash/explode through the Sun and Supernova. But great job overall !

Very nice ! It wasn’t easy at first, but then I understood the strategy and it was fun to run around, eating and exploding. I just think giving eggs a bomb model wasn’t the best decision, as you’d think they would be used to cause damage and not respawn. But overall, I liked it a lot

I LOVED THIS GAME ! The art is great and fits well, the concept of switching vehicles is very original… you even had time to add a story, and it works ! You did an amazing job.

Note: in your uploaded files, you should check the box to indicate the current file is for windows. It would help people find your game and would allow people using the Itch app to install and play your game with a single click ^^

Welp, got stuck at the 4th boss too. The controls were a bit confusing but I’m happy it was possible to change them. Great bosses, I love the art style and it was impressive you managed to make so many and even randomize them !

Nice game, I love the graphics and the sound design is nice. It’s also good gameplay-wise, the movement feels nice. But you can feel the bullet physics, UI and boss design are still rough around the edges, which is too bad !

Having different gameplay for each level was original, but sometimes it would’ve been nice to explain it better. I didn’t reach the final boss, having to restart the whole game if you died on the last level was just too harsh

Thanks a lot for playing this first version ! You encountered a bug which caused the boss to start with only 1hp. It’s fixed now and it even got a pattern rework, so please do try it out !

Hey there ! there was a bug in the second boss fight which made it have only 1hp at the start of the fight. It’s fixed now and even got a pattern rework, so I can only recommend to try it again !

Good call, it’s probably due to the web build using threads to fix audio delays. If anyone encounters this bug, or generally if the web build doesn’t load, you can use the version specific to your platform instead

HAHA I loved it ! I was literally screaming at the end xD Amazing job

Haha great game ! Okay, it was really hard to complete a precise platformer with those slippery controls, but I still love the idea ! I feel the number of puzzles was just right for a jam, amazing job.

Sorry, but the exported project doesn’t work ! I had an error “CreatProcess() returned 2” when I tried to launch it :/

I liked the idea ! Though it feels a bit like a missed opportunity that the big saws don’t damage the zombies aswell ^^

The game was ok, with an interesting base idea, but it lacked polishing. The fact that the circle didn’t target the mouse cursor but used the relative movement made the ennemies very hard to target (since they go fast and spawn very close), and it wasn’t clear at all that the cube was supposed to stay behind the green lines. So in the end I died a few times accidentally or without knowing what it me. Too bad ! It could be a lot more enjoyable with a few fixes ^^

Nice game ! I was really impressed by the idea and execution at first ! Though they’re good, they could be better, and a few things made the game very frustrating.

Still, you did an amazing job. The base concept of the game is good, the controls feel tight and the art and sound fit well with the rest. So it’s too bad the polishing was a bit lacking ^^