Too Many BulletsView game page

You need to take care of the enemies, but don't shoot too much or it might get Out of Control
Submitted by Gredu (@Gredu_IceUp) — 6 hours, 21 minutes before the deadline
Add to collection 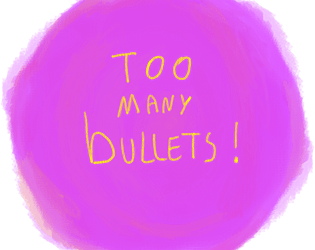 Too Many Bullets's itch.io page

How does your game fit the theme?
Don't shoot too much or it might get Out of Control

I don't mind dying as often as I did as long as it's too a funky tune.

The core premise of the game made sense without much explanation, although I didn't quite get the bomb mechanic. I liked the overall crayon/pastel look of the game, I'd just suggest being more deliberate with your color choices. For instance, having the enemies being a different color than you, and having their bullets look like yours, since their bullets and your bullets will hurt you just the same.

That said, I do like the risk/reward of trying to shoot down enemies with the draw back that every miss is more peril for the player. After firing off several shots, I changed my strategy to a defensive one, letting the stray bullets take down the baddies in due time. Neat concept!

A bullet hell certainly is out of control. I like that the arena is round, instead of the conventional square shape. Though, I wish there was some explanation of how to play the game. There are red and orange bullets, but they both do damage. I would suggest orange being my bullets and red being the enemy bullets. It would also be nice if my bullets only damage the enemies, while the enemy's bullets only damage me. Someone also mentioned that there is a shield mechanic, but I didn't discover that whilest playing.

Pretty fun concept! It was very hard till I discovered the shield :D

Submitted
Birthday Party: Out of control!
LikeReply
VidinfishSubmitted1 year ago(+1)

A pretty addicting game. I didn't find any problems with the game. Great job!

Minimalist,  sketchy, nice colours. Just how I like it.

Man things get really hectic once the bullets start flying.  Once I grasped which color was dangerous and that shooting my own gun was kinda dangerous, I got really into it.  It could use some game "juice", but it is a really neat concept.

Great bullet hell game, I like the idea of charging your bomb using your shield! Very fun to play! It adds a nice risk/reward when you shoot a lot of bullets to take them back with your shield! Very nice music, and overall great game!

I love shooters. I think were was a little bit of dissonance in mechanics though. Losing control after shooting too many bullets means you need to be careful and precise with your bullets. However, the bullets are tiny and so are the enemy hitboxes. They're also moving, making it extremely difficult to hit them unless you're at point blank range, which is putting yourself at high risk to getting shot and losing health. I think this would be a little more fun with more screenshake (a little screenshake never hurt an action game) and hixboxes being a little more forgiving. Overall, it's a good game. But I think with a little more polish and focus on gamefeel, it could become a fantastic game if you continue development :)

Thanks for the feedback ! I'll try with more screenshake :D

Haha nope, it's like a simple free drawing app (sketchbook i think, not sure) on a very old galaxy note (2014 or something)
We are no artists so thanks a lot for the compliment :D

Yeah, it looks nice. For a moment there i thought they took a picture of some craft paper or something on top of a table as a background.

I love the idea of a bullet hell where you create your own stage, and this fits the theme very easily and understandably. It's interesting how removing a simple mechanic like bullets disappearing can create a whole new experience! I wasn't able to get the shield/bomb to work, but I'm sure with more time I'd figure it out (unless the shield is meant to be able to block things from the start, in which case not sure why it didn't). Great job!

Submitted
It's me.
LikeReply
GreduDeveloper1 year ago(+1)

The bomb explodes when you attack if the bomb bar is full :)
And the shield is right click on the mouse but it doesn't absorb red bullets :D only the yellow bullets that have touched a wall or in "alert mode"
Thanks for playing !

I see, I'll have to play it again! I was definitely trying the red bullets 😅

Simple & fun - the bomb power gives you back some of the control, but things can still get out of hand. Congrats on the submission!

Very fun game! Nice touch that having more bullets hit enemies more, but too much would induce a freezing penalty and more enemies to soak up the bullets a bit.

Great game! The ricochet mechanic of the bullets is really clever and can cause the situation to really get out of control! Great submission!

I enjoyed your game and found a way to exploit it ;)
You can activate your bomb really quick by shooting the same point for a while and shielding lots off balls when they bounce off in a straight line!

Very unique art style! Love the hand drawn feel to this. This game makes me to be extra-precise & caution when shooting, great job!!!

Submitted
Shepherd And His Sheep
LikeReply
Darenn KellerSubmitted1 year ago(+1)

You made a very good game.

Really nice concept! The risk/reward nature with the orange bullets makes for some interesting gamplay choices, especially when things start getting frantic. And giving the player the giant shield when frozen for shooting too much was a nice touch.

Good work! Hope you continue to expand on this idea after the jam!

wow, this was really amazing, the music is at the point 10/10

Nice shooter that keeps you entertained. Defense and offense work really well together and getting hit by your own bullet always feels deserved :) Well done

Too many bullets (jk)