Submitted by ChickenBarbequeGames — 45 minutes, 42 seconds before the deadline
Add to collection 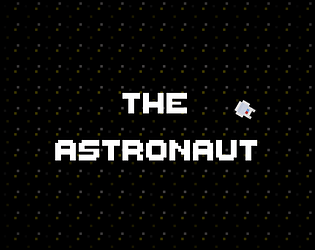 Ranked from 56 ratings. Score is adjusted from raw score by the median number of ratings per game in the jam.

How does your game fit the theme?
You can only move by spinning out of control in the air.

Congrats for the art and music. It is a good concept, but the controls are difficult. I think reducing the inertia of the rotational movement could help. (I got the same issue on my own game actually haha).

Mmm, definitely a game you need to stay calm at. The controls are very sensitive, but it looks cute. And everything feels very solid, great work! o/

That's a pretty cool game! I enjoyed it, the controls are pretty hard to master and i like this! good job! rated! please ccheck out my game too :D

Submitted
It's Over
LikeReply
mikomoaresSubmitted2 years ago(+1)

The controls are dificult but very polished. The song is great. Very addicting game. Well done.

I like that you have to stick the landing.

I'd have liked to roll along the floor as an option. nice pixel art and music.

I could not get on the first platform, but I can respect it was user error.  Love the soundtrack!

The floaty spinny movement is really fun!  The sprite art for the character and background are awesome!  Congrats on submitting such a cool physics platform game to the jam~ please check out mine if you haven't :D

The game was difficult for me and my daugther that likes to play jam games, but very fun and original! Great Job!

I really like the art and music. The controls have quite the learning curve but I did get the hang of it eventually. Fits the theme very well and was enjoyable to play!

Thanks for playing and nice to hear that you got the hang of the controls.

Love the art, I found the controls to be quite difficult, but that's going with the theme, so well done!

I love your idea and your art too. It's a little bit hard for me to control but that's our theme so I really like that. If you like, check out my game on https://itch.io/jam/gmtk-2020/rate/697035

I liked the idea of it, the music and the art are amazing! Good job!

I really like the idea of this game, and it looks great. However, I had a lot of trouble trying to control the player and move around. It didn't make sense to me and I kept wanting to press right to go left and vice versa because it's the direction the stream came out. I found it frustrating in an unenjoyable way but I love the concept. With some polish this could be great

Thanks for playing! It supposed to be a propultion stream so thats why it is in the opposite direction.

I understood why that was the case, but for some reason I kept trying to press the wrong way.  I was not good at this :D

I love the art and the music and sound are also really nice.

The concept of the gameplay is also really cool. And I can see how that might be fun.

However. It is way too hard. The player shouldn't die multiple times on the very first screen. And I never got any further than the first screen so I have no idea if the game got any easier or even harder after that.

What adds to the frustration is that the game doesn't seem to be that hard. But it is.

I can't really say much more because I didn't experience a majority of the game.

My suggestion would be that the astronaut doesn't get damaged no matter how they land and have damage only be dealt by hazards in the levels. That way the difficult movement would be preserved which this game builds upon but it wouldn't nearly be as frustrating.

Submitted
Curse of the Cursor
LikeReply
ChickenBarbequeGamesDeveloper2 years ago

Thanks for playing! Maybe you have a point about the damage.

I spent almost half an hour to :

And with that, after a lot of deaths and retry, I finally managed to pass the first screen where is written the text that say to use space to jump and the left/right arrow to move (thank you the game, I really appreciate your help), before to abandon at the second screen when I saw this electric plant that instant kill. So I would say that the game is very pretty with nice pixel art, sounds and music and, I suppose, kind of fun because I spent some time on it, but also that there is a possibility that may be we can consider that the difficulty is a little too high (at least for a first screen that explain to press SPACE to jump)...

Thank you for playing! i think the hardes part is the start, where you try to figure out the controls, but it is possible. The best solution is to spin out of control end then stop, thanks how you move more quickly. I have a friend that finished the whole game, it took him 1 hour and almost 200 deaths :D

I think the in game timer said I spent over half an hour playing, but I didn't get very far in. Not quite my cup of tea as a game, but a great entry for the Jam.

Nice! You have a really nice balance of difficulty, and I can't help but look at the screenshots and wonder how it feels to get that far, I was expecting Esc to pause and it just closed the whole thing :(

And some ideas came to mind, one, making a bit of particles shoot when jumping, this would mean the astronaut is using thrusters on top of their legs, this would also increase the effective distance of the jump (IE being able to propel yourself off walls using the jump by being near the wall but not necessarily touching it), allowing for more advanced movement.

Two, rolling feels like it could be a mechanic by itself and it making you receive damage feels unfair, maybe this is by design, but rolling could be used for more precise positioning, maybe still make bumping your head have some negative effect other than the chance of having to redo the whole level.

And I always love being able to convey ideas and characters with a reduced amount of pixels, well done!

Thanks for the feedback! Always looking to improve :) And the whole idea was that you can only move in the air (with the thrusters out of control) so the damage for rolling is by desing.