Gather as many servants as you can and reclaim your crown from the beasts!
Submitted by Croxel Studios (@croxelstudios) — 6 minutes, 26 seconds before the deadline
Add to collection 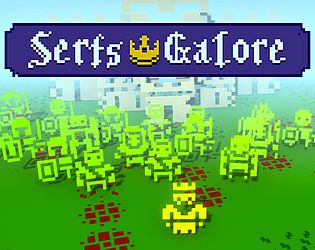 Ranked from 69 ratings. Score is adjusted from raw score by the median number of ratings per game in the jam.

That's super well made \o/ Only the camera was far too bouncy for me, gave me a bit of motion sickness as I have seen other mention, so I couldn't play it for too long. Gameplay was very neat though, even if I ended up hidden behind a door dying because I was stuck ^^'

A joyous little rampage with fun if simple gameplay and great sound effects. The only mild irritations I had were that I wish coins had a wee bit of magnetism and that serfs wouldn't lose track of you so easily. Excellent work!

Wow, I could play this forever. The environment is so well-crafted for just 48 hours! You made good use of ambient effects to fill it out. And the sound effects added a lot of life to the little guys!

I love the idea of being incredibly vulnerable as the player, and relying on a horde of "serfs" to carry out combat. It really adds a unique challenge. Awesome job! I also thought that having the keys require a certain number of serfs to carry them was really smart.

Edit: Watched your devlog. I remember really enjoying the music as I played through, but I didn't fully appreciate the progression that the sound designer put in. That's cool!

This was really fun! Love the polish and fun sound effects :)

I gotta be honest, I absolutely love this game, I managed to get my crown back to the castle aha

It's just so satisfying collecting all the lil guys and the fact you can pick them back up makes this game not stressful. This is such a polished and fun entry, well done!

Can I ask how you got the sprites to do a little bounce animation when moving? I tried that with my chickens but they all got locked to one position and couldn't move

That makes so much sense aha, thank you! Don't know why I didn't think of that before

Pretty cool mechanic. Though, I wasn't a fan of the camera shakeyness and my soldiers died quite quickly. I was only able to get a bit past the blue gate, before I had run out of money and soldiers.

I had fun with this! There's something deeply compelling about growing a horde of serfs.. and being kinda powerless yourself.

Like others, I felt the one-hit king death was a bit harsh, but being able to revive serfs made things feel fair.

Having a little world to explore also added a lot for me and those little voices were super-charming.

Very fun idea! Really like the visuals on this. Took me a while to figure out how it works but I was just a bit dumb and didn't read the description ^^'

Very hard though, that one-hit-death on the king is pretty unforgiving ^^'

The visuals are very good. The gameplay is simple but engaging too.

That was really funny!! xD I like how everything look! Those voices were you? lol

Amazing game! Those silly sound effects were a nice touch! And everything felt incredibly clean and well polished. Gathering an army and having them do your bidding was super satisfying. I also liked the fact that you wanted to run away from the enemies, but you also had to run towards your fallen allies to revive them.

Submitted
The Most Dangerous Game
LikeReply
RagingRooseveltSubmitted1 year ago

That was incredibly polished.  I liked the decision to make the king really weak and not able to fight.  I feel mixed about how easy it was to purchase surfs: on one had, it's was handy in a fight where you're trying to move quick, on the other, I made a few accidental purchases.  Really fun, though!

Submitted
Script Kiddies of the Deep
LikeReply
jdgazlaySubmitted1 year ago

Had a lot of fun playing this. Reminded me of Pikmin, which is always fun to play. You did a good job putting life into all of the sprites and mechanics. Felt very polished. Nice job!

Dang that was pretty good and enjoyable to play.

I would tone down the camera leading the players movement a little.

Another really impressive game. I love the playful vibe that comes through in the animations and cute little sound effects. It's also a really cool idea and all of the various interactions feel really polished. Love the simple control scheme. I wouldn't be surprised seeing this in an app store the quality is so good.

Things that stuck out to me in terms of critiquing:

- The camera movement was cool but it made me feel a little motion sick. I'm pretty susceptible to that though so it's probably a non issue for 99% of other people

- I would sometimes click multiple times over a group of enemies, then my little guys would kill one of them and start following me but ignore the other bad guy that was chasing. Ended in some "unfair" defeats because I couldn't tell my guys had stopped attacking!

Would be cool to see more dynamic gameplay and roles with your little serfs if you were to keep developing this. But it's super polished and great, especially for a jam game. Awesome job!

Great visual design.  similar to other people building the army was very fun but there were some performance issues. Overall good work!

A bit repetitive but I agree that building the army was satisfying. Had some performance issues in the web version but the downloadable version worked better. Good polished game!

Really awesome game, I loved picking up the new dudes and building up my army, it was super satisfying. I wish assigning my dudes to battles and for protection felt a little more straightforward, it was hard to tell what my army was doing on a unit-by-unit bases, but that's a very small issue in an otherwise amazing game.
I had a ridiculous amount of fun, great work!

This is awesome! Love this concept.