A short Platformer Game with Spiders and Bats
Submitted by SirZeros (@SirZer0s) — 1 hour, 38 minutes before the deadline
Add to collection 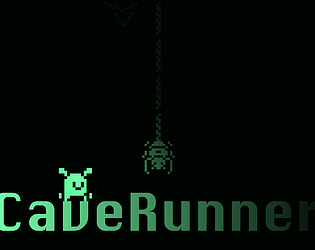 A very polished and fun platformer! II love the use of the art and the lighting. However, I would have liked to been able to use space bar to jump, but that is only a small issue. Great game.

I really enjoyed the mechanic of fast falling to increase your jump height. I had a lot of fun with this one!

For me, it feels like there needs to be some work on the responsiveness and visual feed back of the fast fall itself. I think there are some important design considerations around how and when holding down the "down" key applies the fast_fall force. Initiating the fast fall after a jump feels really clean, but when I hit a spring, I feel like I should have release and press the down key again in order to reapply the fast fall. I was kind of frustrated by how I had to perfectly time the release. I think that's what some of the issues other people were having.

Also, it doesn't seem like I can trigger the fast fall when I simply fall off of an edge, which is also pretty annoying, but is maybe more of a bug.

ALSO also, you didn't tell me I could slide?! So yeah, apparently pushing the "down" key while running causes you to slide. That was pretty nifty.

Another thing I noticed: seems like the knock back affect could vary wildly in some cases.

In any case, once I got the hang of it, it was pretty fun, and the music was really good!

edit: Oh! I also wanted to say: if you're planning on adding some polish, I personally think there could be a bit more effects, like wind falling animations, to add some juice to the whole fast fall animation. I noticed the character starts flashing when he starts hitting terminal velocity or something, which was really cool!  But yeah, the way it currently is also works well enough and definitely doesn't detract from anything! Just some thoughts.

Hello, thanks for your detailed feedback, I'm glad you liked it anyway :)

Your solution to that problem with having to release and pressing the button again definitely is an interesting approach I would consider next time I implement this mechanic into the game. I noticed this problem in my own playtests and the way I tried to fix it was to simply removing the possibility to accelerate downwards after hitting a spring for a very short time period (around 0.2 seconds). This way you are forgiven for "messing up" releasing the button. Think of it like the time frame that is often given after you run off a floor and you still can jump.

I think the problem in this game was that this mechanic apparently was very new to most people (even considering myself, but I quickly got the hang out of it by playtesting a lot of course ^^') and I placed a very hard jump right at the beginning. Apparently many players quickly got frustrated that way since they hadn't had any chance practicing with easier jumps and being rewarded for that. Also there could have been things supporting the player by somehow making him understand how to deal with this mechanic. (Could have explained that the player has to build up as much momentum as he could by pressing the down key at the highest point and releasing it right as he was about to fall on the spring).

That you can't trigger the fast fall after falling off the floor most likely is a bug. I don't quite remember how I coded this atm but it probably had to do with the way I coded the jump mechanic and tied it directly to the accelerate downwards mechanic so that you can only do that if you had first jumped once (even after falling off an edge). So it pretty much is just a bug I could have fixed if I noticed ^^'

Yes, I didn't tell much in the game itself, that was mostly a time problem because of the jam. It would have been written in the description on the game page though but I know that few people first read the description so yeah, my bad :)

The knockback was depending on the size of the creep hitting you and you could kinda handle how much you where being knocked back by moving against the knockback. The way I handled it was not ideal but it felt kinda intuitive since you didn't lose control over your character after being hit (which is often the case in other games).

Anyway, once again, thank you VERY MUCH for your feedback. It helped me a lot by re-thinking about everything you mentioned. I probably won't work much on this game anymore but I really this down-mechanic and it definitely made me realize other find this idea interesting too so I might consider including this feature in another game I am currently working on :)

Good idea. At the beginning it was really hard for me to get used to the jump mechanic but then i was really fun. The music was very good. I like your game it was short but fun to play. Great job! :)

Really smart mechanic - being able to add force on your fall to hit bouncy pads harder. That's super cool. I think that second jump is a bit hard for being so early in the game, though. Overall really nice job! :)

Submitted
Depths of the Damned
LikeReply
SirZerosDeveloper2 years ago

Thank you very much for your honest feedback! :)

I struggled to get past the second jump because I didn't realize to alternate between up and down keys as your raising/falling respectively. I kept bashing my head.

Once I realized that though I enjoyed the rest.

Thanks for the feedback! Next time I'll try to make a clearer start! :)

A superbly polished game with an interesting use of lighting! The audio was well-built with the springs and I loved the progressive tutorial! A 5-star effort, bravo!