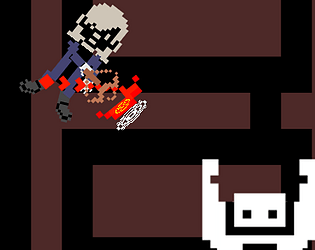 The idea is great. I wish it was more forgiving at first so you can get used to it.

I could not kill a thing until I noticed that the crossbow animation had to play twice before being fully charged.

It's a good game, but it needs a smoother introduction to game mechanics. Start with just 1 enemy so people can figure out how to kill without clawing for their dear lives. Some audio feedback would have been nice, so I can register with other senses if I have been hit or if I hit someone. You can use "BFXR
or some other random SFX generator for these effects, takes 10 minutes to set them up.

Submitted
Battle of the Bald Mountain
LikeReply
GaleSubmitted1 year ago

Nice game! It took me a little while to figure out the weakening system, but then again I should have read the full guide before trying to play. The main character art is really creative, and I liked the enemy attacks (although, I found them quite hard to dodge at times). The slow motion with the crossbow was a nice touch, too, well done! Would have been nice to have a counter for how many enemies I had killed, for progress and all.

Great idea and a cool mechanic, weakening enemies first then finishing them off. I found it a little bit tricky though, I got quickly overwhelmed at the start. I think a more gradual introduction would be good, starting with just 1 enemy to get used to how to play. I like how you used the sprites for different effects like grass for the shockwaves.

I think with a bit more polish and player feedback this would be a really fun game, as the idea and mechanics are good.

I really liked the effect of charging your shots, the shockwave effect on the big guys was also really neat!  The idea of stunning, whittling down to a death state, and using a charge move to finish is great.  I feel the game just needs a bit more polish, it's a bit to easy to get overwhelmed very quickly, and the control could be a bit tighter.  Great use of the assets, I'd love to see this continued upon!

Nice game, mechanically good, and engaging combat (and kinda hard). I kept hitting spacebar for jumping, for some reason my brain wanted it there :D. The game would definetly benefit from more feedback for the player, visual, but especially sound.

Great game! Unfortunately, it's very difficult for me, but I still had fun thinking of the right strategy and trying different tactics. By the way, I didn't see spacebar in the control list, I accidentally hit it and got some slo-mo. Is it intended, or did I just find a secret key :))?

Yep, I left slo-mo bound to space bar back when I thought I would have aiming and slo-mo be separate buttons. Thank you for playing!

Wow fun! I feel as though the contact damage was not needed with the difficulty and I had a hard time jumping between platforms because my head would hit them. I love the slow down time and had some pretty epic moments where an Immortal was jumping over me and I sniped him out of the air! Excellent! Good job!

Definitely a fair point on the contact damage; I've been finding it annoying to deal with myself when playing. Thanks for trying it out!

Awesome endless slayer! Love the slow motion, but I am kind of missing some oomph when you hit an enemy/get hit. Other than that lovely game, well done!

It is really a hard game. I miss some sound effects and music. Sound effects are a great way to give the player feedback what is going on in the game and make a good atmosphere. Overall a nice little game! :)

Sound is definitely something I wish I had made time for. Thank you for playing!

Was fun to play, I died quickly in the beginning, but got a bit better after a while. I did keep pressing the spacebar for jump, but that didn't work and I had to remind myself to press "W".

Submitted
One night at the Mansion
LikeReply
TheWanderingShadowDeveloper1 year ago

Very fun game concept, you could maybe start with weaker enemies and throw the current ones in as challenges.

These two enemies do seem like they'd be somewhat elite, huh? Thank you for the feedback!

Love the slow-mo kills. it's my fav thing in this game^^

Also the character design is very unique! Not perfect but it has alot of charm

You could add  more ennemy variety and healing and it make the game more rich :)

oh also you forgot to add sound effects for the attacks. That's an easy way to give quality to your game^^

Yep, sound was definitely something I wish i had made time for. Thank you for playing!

There are many cool interactions in this game, I wish the enemies were less tanky because of the limited space around the player. Other than that and the suggestions from other people, the game was good!

That's a fair point. Thank you for the feedback!

Enemy animations are really great, especially the guy who sends shockwaves out. The fact that enemies are only greyed out when killed is kind of odd.
I was initially a bit confused by the weapon range. It felt like it wasn't possible to swing to the left because of the way the scythe was positioned. I also agree that the range is a bit short, and the jump is kind of janky.

The dodge was cool. i-frames is a big plus! I would've maybe tied dodge velocity to a sine-wave to get speed-up and slow-down at the start and end.

All in all quite good! Especially the way you've used the sprites

This game is basically a slo-mo execution-style headshot simulator. It took me a second to figure out the controls, but once I did it was fun and satisfying to play. I really like that you leaned into the slo-mo mechanic and made it a core part of the gameplay. After a while I was kind of in a groove rolling around and blasting swordsmen out of the sky. It was pretty cool.

The controls felt very responsive but there were a few sticking points for me: 1) the jumping felt a bit jerky and I was frustrated when I kept hitting my head on the platforms while trying to jump enemy attacks (esp the ground pound from the tanky guys). It felt like a bit more space to move around might open things up a bit and create more fun creative ways to kill stuff, and 2) I kept mis-gauging my rolls and rolling directly into enemies. I'm not sure why, but I think it's such a quick movement and you cover so much ground I couldn't quite get a feel for it.  3) Frozen swordsmen in mid air attack the second they become unfrozen. This might be by design but damn, they got me every single time

Overall it was a lot of fun! Could easily see it expanding with new enemy types and combinations to create a chaotic arena battle high score fest. Great work!

Fair enough, I was thinking about adding more space to the arena, but it would have required a retuning of the movement that I didn't have time for. Thanks for playing!

Once I got the hang of the controls, it was super satisfying to stun a guy, roll in, slash him down, then hit the charged up shot to finish him off after rolling away. The time slow mechanic felt really good, and I enjoyed trying to stun the sword guys out of the air. It seems like having some more aerial units to fight against would add to the enjoyment a lot!
Great work on this game!

The third enemy design I would have done next was definitely going to be a ranged unit that would stay in the air using the goobler sprite. Thank you for playing!

Very good design on the enemies. But I need a better weapon!

Haha, what would you like exactly? Better range on the melee? Faster charge on the bow? Thank you for playing regardless!

That's definitely fair enough. I'm having plenty of trouble landing melee hits without getting hurt myself.

The difficulty is certainly not well tuned. Mainly, enemies spawn at a fixed rate no matter what, so if you don't take out the current ones quickly it's easy to get overwhelmed. Thank you for playing!

It reminds me of the Newgrounds games back in the day.  Nicely done!