Avoid killing friendly bystanders while your gun is possessed by the spirit of the beat!
Submitted by Serponge (@sersponge) — 32 minutes, 40 seconds before the deadline
Add to collection 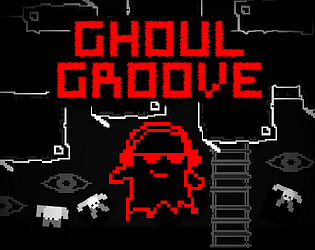 How does your game fit the theme?
Your gun was possessed by a spooky (but also very groovy) ghost, forcing you to shoot in time with the music.

Art looks nice. The beats sound truly groovy and almost makes it hard to focus on where you are shooting in a good way. I didn't find any problems within the game aside from the camera moving slightly too slowly when the beat comes. Great job!

Submitted
Controllers Out of Control
LikeReply
Ezra MasonSubmitted2 years ago(+1)

Holy moly that was incredible! The syncing to the music was perfect, and the way you introduced players to the mechanics before making the auto shoot was top tier game design. If I had to nitpick one thing it'd be the absence of particles on a bullet hitting something. Character blood splats were incredible but it would've been cool to have the same powerful feeling when hitting bullets against a wall or breakable rock. That's such a minor detail for such a fun game though. Awesome job!

I don't think bullets should kill people outside the screen.

Yeah I agree, sadly we ran out of time to fix this issue :/

Right now we're trying to think about what we could do to make it work, we thought about adding walls of flesh that you shouldn't hit on the side so that shooting on the walls become full part of the gameplay but it could also make it much harder, so we're not really sure what to do. Oh yeah it should be noted that bullets don't actually kill anything offscreen they do get destroyed past the screen border, but the problem is bullets taking long enough to reach the edge that an ennemie appear, so maybe making bullets faster would fix it?

What I would personally do is removing the bullets even earlier. There's a zone  close to the screen edge where it's redundant to let the bullet keep going, since nothing fits there. Just my 2 cents tho.

Yeah maybe with an aura of some sort to indicate that to the player, but in that case we'd probably have to zoom out the camera as well so that the playing field doesn't become too small

WOW THIS GAME IS SOOOO JUICY!
I just have no words...i will be back here after i gahter some bette thoughts...and after i finish it :P CYa!

I hope you managed to beat it, it can be pretty tough :p

Sweet music, juicy mechanics, and you managed to fit the theme in a fun way without getting frustrating. Very cool!

Glad you didn't find it frustrating! It's always pretty scary to try to strike the right balance for a game to be entertaining and interesting but not fall into pure frustration. Thanks a lot :)

Oh yeah, i forgot to mention: The one advice i would give is to either lock the cursor to the window or allow full screen. You get used to it after a while, but at first it's kind of annoying. ;)

Actually I forgot to put it in the description but you can toggle fullscreen with F11! But there's definitely something to change with the way you aim/the camera work either way, because due to the autoscroll the cursor will constantly drift :/

This game is sweet! I love the music! Also love how it starts off without the groove so you can figure out the mechanics. Really well done

Great game! Saw this on Jupiter Hadleys stream and just wanted to play it. Feels awesome and the shooting on the beat of the music is just fantastic!

And love how the twist is to protect the people instead of having to kill them.

Love this. I included it in my GMTK Game Jam compilation video series, if you’d like to take a look. :)

This game! I have to say its almost perfect! I want to see this in the top 100! The beat  is amazing! The mechanics are freakin amazing! Definitely in my top list of Jam Games!

never knew you were also a programmer nice!

the visuals are adorable, really loved those. checkpoints coulve been nice. I think the core gameplay and execution of it were amazing though. Had a lot of fun playing your game! Amazing job!

Thanks for submitting your game to play it on stream, hope you find the feedback valuable! (Approx time codes to all games played in the description). Congratulations on making a game in a weekend!

Amazing. Really. The hidden tutorial, the music, the concept, the execution. It's just so perfect. Love your work, from GD to this :)

amazing game! i hope you win or at least get featured in GMTKs video

I'm speechless! Your game surprised me in an incredible way! I really liked it, congratulations! Excellent idea, excellent adaptation to the theme, excellent execution! Well done! 5/5 !

So I wanna preface this by saying that I was a big fan of your guys' work in GD when I played from 1.9 to about a year ago, when I stopped playing. I happened to catch your submission in the GD discord by complete luck since I was still in it for some reason, and knew I had to give it a review. Hopefully I can remain as unbiased as possible when writing a review that I know some of my favorite creators are gonna read.

First off, the art is overall pretty great. The "juice" is just right, not over the top but still satisfying. The art style isn't unbelievably unique or original, with the white on black palette being used quite frequently, but it fits the game well and its not just straight lines or one shade of white. Everything is textured and detailed.

In a rhythm game, music is crucial, and I almost have trouble believing that these tracks were made over two days. They're honestly fantastic, with the gun's firing noise acting as a driving bass. Something especially interesting is that the BPM actually affects the gameplay, so the tempo must've been chosen ahead of time. I can see how the game could get really in-depth with songs that slow down or speed up at different times, causing the gun's fire rate to change. And since the game is an auto scrolling rhythm game (hmm, sounds familiar) you could still handcraft the levels based on where the song is at all times.

Gameplay-wise, the game is what you'd expect from experienced level designers. It starts out with a tutorial teaching the basics, accompanied by an ambient track to keep your gun from shooting. This ensures that the player isn't overwhelmed with information when the music starts. I love how the white dudes get more and more dense over time, so despite the game essentially being one long level, there is still a noticeable difficulty curve. One section is particularly awesome, with the cracked blocks on either side insuring that you can only shoot the walls once before they become hazards.

Overall, the game is great, and I wouldn't expect any less from this team. I can tell a ton of work was poured in. Fantastic job on this entry, and I honestly can't believe it doesn't have more ratings.

Also if you guys have the time, it would really mean the world to me if you were to play and rate my game, as I like to think that it implies a lot of design elements I learned from playing GD and similar platformers. That's it, take care y'all.

Unreal. The amount of polish is nuts! I couldn't get to the end, but with that said: fantastic work. I'd absolutely love to see this as a commercial release someday.

Aw man this awesome! Really well executed! I think this is my favourite interpretation of the them yet, love how the music gives you that little bit of predictability without sacrificing the "out of control" idea.

I would love to see a full game to be made out of this!