You have one bullet and one second to defeat one enemy. Good luck!
Submitted by OKONNAYARAMA (@AlexandrMany) — 2 hours, 23 minutes before the deadline
Add to collection 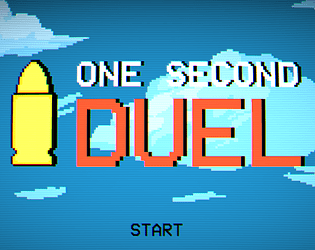 Pretty fun! I got some Hotline Miami vibes from this. I got confused for a little while but figured it out in the end

This game is incredibly polished and juicy! I could not make heads or tails of the ricochet mechanic though - maybe it would be nice to give the player laser sights to compensate for the fact that they only get one shot.

Great game! Amazing style and music - and is very polished for a game jam game. I love the opening. My only complaint is the shortness of it! But obviously a game jam game is a game jam game. The level design can feel odd at times, but apart from that - great game man :)

Nice game. I like the style, the post process effect enhance the simple graphics and the music fits very well. The gameplay is quite simple and easy to understand, I wish there were more puzzles :). But overall cool game, nice job.

I really like the concept, and how hectic it felt.

If you wanted to expand this concept, I think the hectic aspect could be expanded by having an "endless mode" with randomly generated levels and a certain number of lives. Obviously, it would be pretty complicated to make a random level generator which is also balanced, but it'd solve the problem of having set levels (since currently you can just look at the level, die a couple times, and figure out exactly where you need to shoot, which takes away the "twitch shooter" aspect).

There's also the problem with physics where bullets can ricochet directly back at the player when they shouldn't but that's already been mentioned in the comments.

Overall though it's still a really cool concept, and the presentation is also great.

Submitted
There and Back Again
LikeReply
LubakaSubmitted3 years ago

First off, love the intro and love the music!

Not much feedback i could give except the physics being a bit weird sometimes where an obvious bounce in another direction would actually go completely in the players direction and killing them.

Apart from that, this is a solid game with an awesome introduction and great execution!

Submitted
The One Technique
LikeReply
ambritsSubmitted3 years ago

The one second limit give some excitement to it, liked the idea.

The indicator of the end of the first second was ot clear enough though and sometimes the bullet came straight back to me even though it hit the wall in an angle.

Wow, the juice is real in this game. I really like the idea and the presentation, so don't take this list of criticism to mean I disliked it, but rather that I cared about it enough to put some thought into how it could be improved. :)

The physics are kinda janky. I often shoot a bullet at a surface at an angle and it comes straight back at me. It looks like what happens is that the bullet penetrates into the surface and detects both a horizontal and vertical collision and then comes straight back. That means some levels I just had to redo a few times until the shot happened to work.

The aiming is a bit imprecise. If I put the cursor exactly on the corner of a wall (e.g. the corner that the opponent shoots in the first level with diagonals), the bullet won't actually hit that corner, but either go past the wall or hit it away from the corner.

There's no clear indication of when the second is over. Since I'm probably looking at the cursor and level layout to do my aiming, I don't really want to be checking the timer for when I can click, so I just start mashing the button once I'm done aiming. There could be some kind of whole-screen indicator that the timer is complete, e.g. a flash or a change of the colour scheme.

The fact that the levels are static means that if you fail them, the 1-second appeal is kinda lost, because now you've had X seconds to stare at the level and make a plan. At that point it just becomes trial and error to figure out the right shot and is no longer about quickly judging a situation. This could be fixed by randomising the levels to some degree, but probably only small variations so you can still control the theme and difficulty of each level.

The difficulty curve is off. The diagonal levels in the (early?) middle are definitely the hardest, and afterwards it gets very easy again.

You could escalate the difficulty further by relaxing the "only one" theme on the enemy count and having your bullets pierce enemies, so you'd quickly have to find a shot that goes through multiple enemies.

Again, I really liked it and would love to see a more polished version. Keep it up!

Thank you for the feedback. I really appreciate it!

Very polished, perfectly worked with the theme, some of the levels were a little easy but yeah

Cool little game! I adored the crt filter, font, and music. Reminds me a bit of Hotline Miami, which is a big compliment :) Fun stuff, but some of the corner-based ricochets are ridiculously hard to pull off, so I wish there was some sort of forecasting or mitigation to that difficulty besides through just long trial and error seshes. Really nice work though.

A simple and a very solid entry! Everything right on the point. Well done!

The later levels were kinda easy, but it was a fun game. I killed myself more times than I'd like to admit.

The concept is cool, though some issues with the collisions, level 7 i couldn't pass because no matter where i shot the bullet came back straight to me

Also the music stopped after 30 seconds or so

Thank for playing. Didn't have time to fix buggy physics. Sorry about that one. Weird that music stopped after 30 seconds =\

Oh wow, the music is an absolute banger. One of the best tracks I've heard through the entire Jam. The music basically got me half-dancing during the entire duration of the game. it felt so good together with the aesthetics, the art fit the music very well as well.

The gameplay was quick and responsive, as it should've been. The only bug I've encountered have been a bit of buggy physics (especially in level 4, got the bullet to just straight bounce back to me and kill me :p) but except for that, a really good entry. ^^

I also made a game, check it out if you have a few minutes to spare! ^^

Thanks. I really appreciate it!

Cool idea! It felt like a little action movie

SImple, but enjoyable and decent realisation.

Submitted
One Spear, One Kill
LikeReply
Farry1Submitted3 years ago

Funny little game, enjoyed playing it. I like the overall idea and look, also the Adherence to the theme.

In terms of design it could have been a bit more fluid. My character for example wasnt visible at first sight in every level. also some reflections of walls didn't work properly. I got myself commit suicide a couple of times because the bounce shot the bullet in the wrong direction.

Submitted
Meet Me in The Shadows
LikeReply
Krystof KneslSubmitted3 years ago

Really fun to play, I enjoyed it!

This would be a really fun multiplayer game

Submitted
Press Any Button To Coninue
LikeReply
Glecho3 years ago

I don't know if it's intentional, but the opponent killed itself on the last level. It was pretty funny considering I flubbed the shot.

It's nice that this is a quick series of levels, you could probably lower the timer and make it a decent Wario Ware style game. It's also nice that you can just see how the opponent shot to copy him.

Yea last level was intentional. Thanks for playing!