Recruit everyone, there shall be only one group, fail and you'll lose
Submitted by PatateNouille — 1 hour, 47 minutes before the deadline
Add to collection 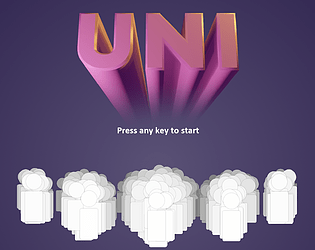 Wow that's a lot of work packed into 48 hours! Very well done! I like the music and sounds, especially the ominous "uni" before the game starts haha, somehow seems so dystopian.

As for specific feedback:

- I didn't really notice the effect of holding for more points required - I ended up simply always holding to the full length.

- In terms of difficulty, blue was very hard, green and yellow were good and red was a tad easy.

- I like Mario Party and this kind of felt like that to me :P On that note, there'd have to be a lot more games to fill it in, otherwise it'll feel too repetitive playing the same mini-games time and again. 4 in 48 hours is pretty amazing though.

- I particularly liked the green mini-game, and the blue one (despite it being too hard) - the way they light up are just satisfying to me somehow.

- Maybe bugs (that you maybe already know about): green balls bounce wrong on the top and left sides of the screen; cats sometimes spamming sounds when the mini-game starts, probably because they're too close to each other?

- There are a lot of instructions to be communicated. Assuming users won't read into them like us, it might be worth copying Mario Party and having a "playground" before the actual mini-game starts, where they can learn by practicing.

Great effort here - it's pretty incredible that you got so much done. All the best!

(Just realised the length of the answer, welp, reading ahead)

Thanks ! Made the music and sounds during the 48 hours, as well as all other assets in fact. Didn't had any sound effects on the menu so i just thought making that weir "uni" sound repeating over and over, also it would make the player wants to play as listening to it for too long starts to be uncomfortable xD

- Well holding the button charges the bar, if the bar reaches 50%, then you have to get at least 50% score in the minigame, if you get less you will lose. It is sort of a bet on how well you will succeed. But yeah only the blue one i won't always do full bar length too.

- It's kind of the same issue in fact, the design was supposed to make the minigames hard, and the goal wasn't to finish them, in fact, getting 100% in them should have been really hard. Though balancing the minigame was kind hard as 3 of them were made in the last 10 hours. The blue one was the first one and that's kinda why the difficulty is a bit more intersting on it, the other ones i barely had time to test.

- Yeah i noticed that too, when i was brainstorming i didn't thought of Mario Party at all, but later in development i thought about it too. And i agree about having more minigames, though the first idea i got was making everything timed, the game was supposed to be to go as fast as you can (though it wouldn't give more point to go fast in several parts), but as there was no UI i choose to limit time only in minigames. With the time constraint in the rest of the game i find doing the same game less repetitive, but yeah would definitely do more if i am to continue this.

- The other two being mostly just brainless spam clicking it makes sense, tried to make them funny to counter that but yeah might want to try to find versions with a bit more thinking involved.

- Those are indeed bugs, the balls AFAIK were working ok, but it doesn't surprise me as i had to stop working on the rumor minigame to go to cats, but they also came with their bugs, the initial goal with cats was to make a whole bunch of it, though i didn't had time to fix overlapping cats unfortunately, was supposed to have way more cats but the best i could do was just reduce the number of cats so that it would limit the amount of overlaping ones. Could have jsut prevent the audio from playing on collision when on the ground but overlapping is also generating points so this way the player avoid "cheating" the minigame because it's just so annoying xD

- I spent all my time working on minigames and some other things and yeah some tutorial is really missing, and quite a lot of feedback on what you're doing too. For the minigames yeah it could be good to let player try out the minigame before actually playing it, but as i kinda want to keep the aspect of being pressed by time, and keep the minigame quite short, i see it more like on the main menu you could try all the minigames without time constraints.

- Might be indeed, though as there's nothing else than the minigames, it only reset your score, and that's kinda where i want to go with the holding button for more points, it's to make the player bet, if he charges very little he won't gain much, if he charges a lot and fail to complete the minigame then it's not like the player didn't had chance and the game choosed to impose such a hard time, the player himself would choose his difficulty. That's why i'm kinda ok with losing being harsh.

Thanks a lot for the feedback, did my best to do as much as i could, though i did watched movies during the 48h so i guess i could have done more but gotta rest sometimes ^^

I gotta say, that was a pretty complex idea, nice job! The only minigame I could actually finish consistently was the red one, so i sticked to it. But overall, very polished and visually pretty!

Submitted
you are the only One
LikeReply
PatateNouilleDeveloper1 year ago

Thanks for the feedback ! If i had added something to allow the player to choose how much time he had to finish the minigames would have it helped ? Or would something else be needed ?

Maybe, it would help a lot in the blue and green one, but i don't know if the yellow one would benefit from it. I actually didn't understand if the cats jumped randomly from side to side, or even its possible to have them all flying at the same time, I could only move a couple at a time.

Yeah the cat one had a massive redesign last minute because of bugs i could fix in time, you were supposed to drag them and give them inertia, but that mechanic made it possible to do things that were just to hard to balance and i had a few bugs so i just gave them a random inertia when clicked, there was supposed to be more cats but the generation makes them spawn on top of each other and to make it work better was too long so yeah, tried my best to save the shot

There's some lack of information as you said in some comments and yeah that's a lot of clicking. I wasn't really good at those minigames so I ended up killing everyone. Not sure if it's the best way to gather people together.

Thanks a lot ! Glad to hear you enjoyed it :D

Well, it's supposed to be you talking about murdering people to try to convince them using fear, but yeah, as it's not said anywhere within the game, gathering people by murdering is a way to go ^^ Though if the group isn't particularly sensible to fear it won't be really efficient

Really hard minigame collection. Didn't manage to even convince one group. Nice look, the logic and rumor games are fun

Submitted
The Right Way to Drive
LikeReply
PatateNouilleDeveloper1 year ago

it's true a lot of spam click is involved though but i usually finish 10 seconds before the end, thought of letting the player choose how much time they got but i didn't had time to implement it, ironically

Thanks for the feedback :D

I was successful in most of the games (except for the logic one, for which i seem to be too slow), but I never managed to convince a group. I won several (5-10) times in the category the group seemed to like but still had almost no progress. Maybe I was just too impatient.

Guess the lack UI is more important than i thought then

When choosing a minigame make sure you hold down to fill up the bar at the bottom, it is the required percentage of completion to win points, but it also makes you win that much point. It's like placing a bet on how successful you will be at the minigame.

Cool game, can't say I've played anything quite like it.

The amount of clicking you have to do is a bit much though, my finger started to get pretty tired after a while. Maybe some sections where you can just hold down the mouse button could solved this.

I like the theme and the minimalist presentation, great work!

Did my best to came up with something original :P

Yeah i didn't had that much time to test and never got to a point with that much clicking, at first all parts of the game were supposed to be with a timer, meaning even less time to rest ^^" I guess i wanted it to be some kind of part of the gameplay.

Thank you very much for the feedback !