I want to go back...
Submitted by sintech — 2 days, 22 hours before the deadline
Add to collection 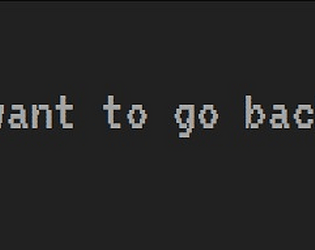 Theme interpretation
A text-adventure based on moonshot thinking...

Great writing! Also when the sound kicked in was epic.

I would have liked if one could modify the speed of the text, it's a bit confusing if it's not appearing at the same speed as I'm reading.

That was a serious experience indeed. Good job. It took me few screens to get into it. But it all unfolded beautifully. Amazing how much atmosphere you can create with a little text and sound. And the sounds and music are just brilliant. Really cool adventure. Gave me the chills from the beginning. It's like that kind of short story animations (on dust youtube channel for instance) that I love so much.

Congratz on this piece of art. Very creative story. Thanks for making this so I can experience it.

Wow, thanks for that experience.

I am super impressed with what you managed to accomplish using nearly only text! I think your sparing use of images, music and sound effects only increased the impact of each occurrence of these and really contributed enormously to the unsettling vibe of the game. The audio quality was fantastic.

You paced the story really well, I felt that the slow fade-ins of links were also an effective mechanism for encouraging the player to process what they have just read, whilst toward the end of the game there was a more frantic urgency to proceeding as the character's realisation dawns. And the ending was fantastic, I did not see that coming!

You probably already realised this long ago but I guess 'I can't breath.' on the very first page is a typo (the only one I spotted actually, but maybe I was just too enraptured by the story to notice). The only minor thing I could suggest you improve would be the puzzle, which I felt lacked complexity, but I can understand that you might have been reluctant to scare people off (I also wasn't particularly a fan of infinity as a transposed eight, but I'll let it slide :) ).

Since this is certainly not a genre of game that I have played before, I think I have learned a lot from the experience, specifically about what a game with little to no visuals (which is usually a primary concern of mine) can accomplish, well done!

Thank you so much for the detailed review! I am super glad you enjoyed it!

For the typos: there might be more, since I was focusing on the text for such a long time that I would overlook those

For the puzzle: Haha, I would say not a lot of people were able to figure out the puzzle (even though I made it in such a way that you can either brute-force it or try to actually solve it). But still, I would say 40-45% solved it while 55-60% could not solve it.
But I will definitely check out resources for good puzzle design.

Again, thank you so much for the review! :)

Check out my post-mortem devlogs for some things that I might change for the future:

Great text adventure. I felt satisfied and rewarded for having completed it. Good balance of narrative, clue-finding, and decoding. Nice use of images (used sparingly). I came across the sticky note on the community board early on and I was glad to see it come back at the end to decode the combination to open the shutter. Nice use of sound and music to create an ambiance. The narrative was convincingly unsettling.  Very cool (and depressing) twist to the story.  Nice work!

Gameplay: I liked how text after I got to a certain part (maybe the death part?) I was hooked I love books so this was entertaining. Also there was kind of a bug when I went to the hallway I could only see rooms 501 and 502 so I had to zoom out to see the rest, but it took a while to find it our.

Graphics: Not the greatest but its a text adventure and there were some interesting pictures.

Audio: Music was good atmospheric music and I liked how you added all the SFX, maybe option of having it read to you could be nice.

Theme: A text-adventure based on moonshot thinking...

Can you play (and review) my game?

Very descriptive feedback, thank you so much!
I will definitely review your game

The writing seemed kind of bad during the first part, but I got hooked when I got to the basement.
The sounds and music fit really well. You created a haunting atmosphere. The character isn't that believable during the first part, but there are some little bits that are quite poignant, like the section that music starts to play and the character comments on it. That was nice. The story is a bit depressing though. I'm not sure if there are different endings, but I hope that if there are, there's one that doesn't end so sad.
Anyways, good job!

Thanks for the valuable feedback!

I look forward to your reply, because I would appreciate feedback.
Thanks! :)

I'm not a writer, so take what I say with a grain of salt. Also (as you may notice) my English is rusty, so that may affect my experience.
The main character's dialogue during the first part felt artificial. Maybe it's the choice of words, or the character's attitude. I believe it's because the character responds to their own thoughts with lines like "I don't care", "Enough of that", "None of it matters now."
If the character doesn't care, why should I? Why mention it even? I know it's denial, but there should be some other way of expressing that, so I don't lose interest in whatever the text is saying.
Hope that answers the questions. It's quite hard to express things when it's not in your area of expertise.
I like the world you built, the places seem almost out of a horror film/game and the plot/story is good. What's happening is in the back of your mind, but you don't quite expect it. And I like that you're not particularly explicit about what happened to this person after the event. Like the body modifications impacting memory. I probably missed some things during my playthrough though.

Although I mentioned it, I'm not sure whether another ending would work, cause you kind of wrap everything up nicely there.

"I know it's denial, but there should be some other way of expressing that, so I don't lose interest in whatever the text is saying." -> I really like this!

Thank you so much. Your feedback is quite helpful!

Glad I was helpful. Sorry if I sounded harsh

We shouldn't be in any creative industry if we do not have thick skin :)
I personally appreciate any sort of feedback or critique.

I'm not really into text adventures but this one really got me, so congrats!

Nice story and sound, and fits well with the theme while still being good and interesting!

wow. what a superb, creepy and awesome game. I really enjoyed it. Played with a friend. And we had predictions of what was going on, but then, when we reached the top floor, we were in for a twist haha. I thought initially the person was just dreaming – moving from the decrepit 5th hallway to the lush ground floor.

In the basement, didn’t quite understand the spiral tbh. but regardless, loved the game.

For your info, sounds did not seem to play on Safari, they did on Chrome... Unsure whether it was a problem on my end.

It was really refreshing to see a text game in the mix! It drew me in slowly. I wasn't completely sold during the dorm section, until I got to the spiral. Then I was hooked. I loved the terminal puzzle. It was the perfect difficulty for a jam. The whole thing was just really cool.

This was very engaging! I second Box of Lights about the audio and text appearing, though; there were a few times when the next choice came before all of the text. I did like how it appeared letter by letter, though!

LikeReply
Box of LightsSubmitted149 days ago(+1)

Interesting story - engaging and very nicely written. The audio was a great touch too, and really worked well with the story. Was a good nostalgia hit to play a text based adventure. :)

I do wish I could've made all of the text appear at once by clicking, rather than needing to wait for it to slowly scroll through letter by letter - often felt like I had to read slower than I would normally to allow the text time to appear. The delay in the user responses being shown at the end often felt a bit too long as well. Maybe these were intentional to create tension and some dramatic effect, but personally felt a bit frustrating.

I really liked the story!

I liked the audio!

Interesting story! I do think some of the dramatic pauses were a bit too long and I found it a little odd that some blocks of text appeared all at once while the rest were letter by letter (maybe a bug?). There were also a few too many choices that resulted in the same 'nothing happens' reaction.  I'm happy that you added some audio and allowed the players to make a lot of the decisions themselves, this definitely made a big difference with immersion. :)

Was really interesting to experience how immersive a text based game can be! Couldn't stop! Not sure if it results in a good video though hahaha find below!

Wow, this is some great writing.  I haven't played a text-adventure game in a very long time, but this one did kind of pull me in.   Nice work.

Submitted
Lumi and the Dark Night
LikeReply
jvalenSubmitted157 days ago(+1)

Great adventure! It’s been a while since I last play a text-based game, yours gave me goosebumps, the music and narrative create a really immersive atmosphere that I truly enjoyed. It felt like a mix of a dream and a “choose your own adventure” like book.