A Tale of a Young HeroView game page

Hello young hero do you want to go on an adventure?
Submitted by Outish — 6 hours, 59 minutes before the deadline
Add to collection 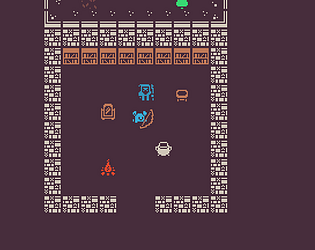 A Tale of a Young Hero's itch.io page

I didn't want to kill that first dude... He didn't do anything to me :(

I'm not really a fan of the cooldown on the bow, it makes everything so much slower. I tried the sword once and then never again: way too slow, way too short a range, and way too much down time after you hit the enemy. It felt like the story was a bit too predictable too.

Other than those small grievances, I'd say the game was well polished, the little particles and animations really gave it life, and shooting the bow was satisfying. I think that's what kept me playing to the end.

I would have loved to see more dialogue, every character was either scared of me or attacked. Apart from that you've put together a decent experience. Good job! :)

Only improvements I could suggest is making it a bit easier to use the bow, and some music!

Saw that ending coming from a mile away! As soon as he gave me a bow I was like, "Nah this dude is EVIL!" nifty little jam game. At some point after dying a couple of times my arrows stop going where the cursor was. At first I hated the particles but then they made sense. Glad you had optimization for if you already killed enemies when he asks you to do it because I had already wiped out half the map by the time he asked me to do the second mission. Dying wasn't really a penalty though, I'd maybe change that! Overall solid little game!

I noticed this problem, didn’t have time to fix it, maybe I’ll release a post jam version fixing some issues

Glad you liked that, what was supposed to happen is e will tell you the mission even if you did it and the he will say “You already did it?” but because of some bug that didn’t happen, maybe that was for the better

Thanks for your valuable feedback

can you please explain some more (what do you mean exactly by “floaty”)?

The reload of arrow didn't seem very intuitive. I would think the character is ready to shoot, but it would fire after a while.  Some feedback on when the arrow is ready would help.

oops.. didn't notice that.. will try it out again. Thank you for the tip.

I thought it was obvious enough

Did I just kill civilians?

Anyway, I liked the fight mechanic and the overall premise. I think you can cheese the archer AI by walking very close to them, because they stopped shooting at me.

cool game, the idea of a medieval rhythm combat game just cracks me up. I feel like this idea has a lot of potential and could be really fun if developed further.

I love the different juices in the game like the rotations, alongside player attacking. Ran swiftly on my PC. One thing I would recommend is scaling down the world to make room for some more detail on the map! An overall 4 star from me, well done!

I agree the map is big

Don't worry, a big map has its pros too. Loads of people didn't like the small map for my game, and thought that the excess detail made it hard to concentrate on the individual aspects of the core mechanic.

Pretty fun, always enjoy a game where you get to shoot a bow. The speed of the arrow was perfect and fighting ranged enemies was very engaging. The main thing I would change is the player stopping when shooting. Otherwise, good job, solid game jam! Also I particularly like the dialog boxes

Is there a particular reason that makes you think that making the player stop while attacking is bad? or did it just feel bad?

Well that sure was something. Played it a bit wrong though. Took the bow, killed the target and tried to go back to the dude. He gave me the same bow giving speech again (bug I guess) so I started wandering off.

After a bit everything on the whole world was dead so I returned to the dude. So yeah, he had more "missions" which I had all already completed. Woohoo, a sword, seems useless. At least on the hands of those sword enemies who never even got close to me. I'm guessing that the bow is far superior so you should probably have given the sword first. 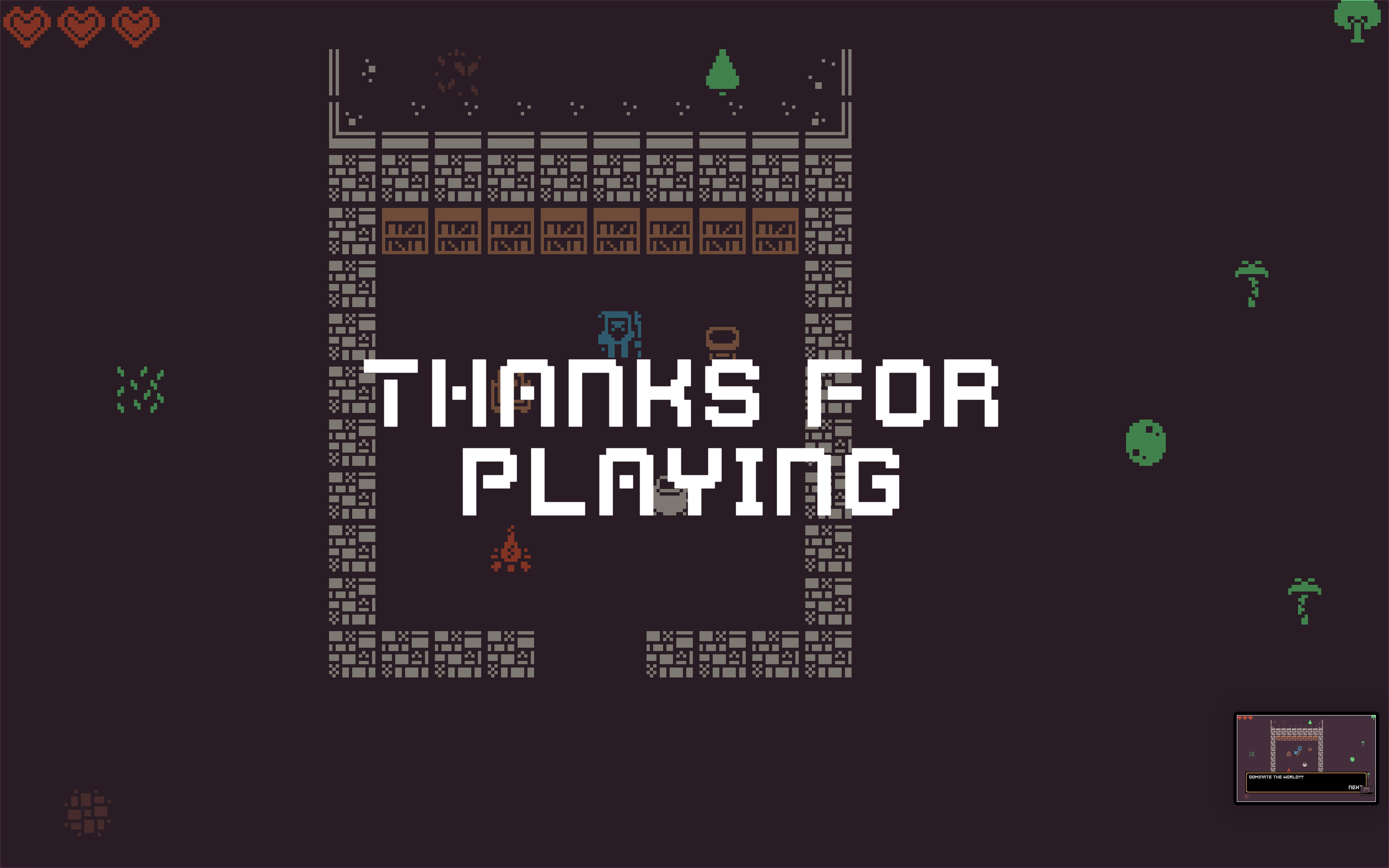 The bow shot freezing the character to a spot was a bit annoying. The archer enemies didn't have the same issue so the most useful method of taking them on was outranging them which in turn didn't feel right either. Getting rid of that freezing and giving enemies more range and also slowing down their arrows so they would be dodgeable would make the combat feel way better. Those would have then felt like proper duels. And the sword guys could just block the arrows with their shields so they wouldn't be the jokes they are right now.

The world was a bit empty too. Would either need to condense it down to a smaller size (without losing anything that was there now really) to get rid of just complete emptiness or better yet add more stuff in between. Wouldn't even need to be anything interactive, just like the very sparse forest but more. And some nooks and crannies with some chests filled with, umm, health pickups at least could be a potential candidate.

Sound was lacking. Nothing bad to say about generated beep boop sounds at all but they would need some variation and more effects overall. And obviously music too would help mask the monotone nature of them too. Especially since the jam even allowed using external music.

I also didn't like how the character got stuck to walls if walking too close to them. I'm guessing they were individual colliders. Changing the player collider to circle would fix this.

Thank you so much for these great suggestions

Someone else told me about how underpowered the sword was

making the attack freeze the player was to give the attack some risk inspired by Zelda and Dark Souls, how do you think it could be better, should I make it shorter? or just remove it?

and for the sword enemies I agree they are so easy I made faster in the last minute and thought that will fix them but apperantly no I guess another reason for this is the environment they’re in maybe I should have put them in a smaller space which will give them some advantage over the player, if you shoot an arrow at them while they are attacking they will actually block it so I guess that’s a shield maybe?

I wanted to make things closer but I don’t think unity has an option to move tiles after being placed, not sure about that

I agree about the sound thing as well there were many sounds that I didn’t have time to add e.g: when the weapon os ready, when you try to attack using a weapon that isn’t ready yet, etc…

again thanks so much your suggestions are pure gold to me

The combat feels good. Sometimes the bow don't shot at the mouse direction. An indicator which characters are friends and which are enemies would be great. I shoot on everything! :) I missed music in this game. This would give it better atmosphere. Overall nice game. Good work! :)

I noticed the bow issue too late

I don’t really understand what you mean by “An indicator which characters are friends and which are enemies would be great” do you mean the people who don’t move in the castle? those aren’t really friends rather a cover

Ah ok. My first impression was the king and his guards are meant to be friendly. Thanks for explanation.

I really liked the combat and the level layout. It starts off easy and in open areas but then gets more difficult in the castle.

But there were a few things I noticed:

Submitted
Miz and the Boys
LikeReply
OutishDeveloper1 year ago(+1)

Cool entry with good combat mechanics and nice particles :) Good idea to make it so that the bow has some kind of cooldown. Here are two things that could be improved:

The old man will tell where is your next target, wasn’t that clear? or how should I have done it?

I loved the particles when the bow was ready to shoot, and the movement particles. If this had an end-game goal, it has potential.

There’s actually an end to it

I couldnt seem to find it? I went through the castle area above and nothing else happened, it seemed the map was cleared.

were there enemies in the castle or not?

I do not believe so, let me retry it.

Edit: Upon retrying, there were no enemies in the castle, and no endgame triggered. Maybe a bug then :/