Shoot out a stream of smoke at a fire to ignite it.
Any enemies that were touching the burning smoke will burn.
For the first enemy, use the fire to their right :)

I considered checkpoints but considering how short the game is, I thought it would make it too easy :D

The fire doesn't reappear but it's quick enough to restart the game with R :)

Made in 50% of the recommended time, just like yours :)

Cheers :) It's not exactly A* pathfinding but if you can't tell, that's good enough for me :D

Managed to finish it by doing short taps

It looks and feels good but I couldn't play it

I did explore the whole map and got a triangle from the lonely guy :)

Enjoyed the gameplay and level layouts. Finished all the levels :)

I'm glad it turned out quite difficult. I thought I'd made it too easy :D

Cheers :) You were so close!

Would be nice if I could use the numpad too

I basically placed the triangles to make a nice pattern then added dots afterwards :)

Clever idea and nice thumbnail :D
If the background was a grid, I think this could be more strategic than trial and error

I'd only say maybe the text should be bigger

Near the end, I had a lot of clear orbs laying at the bottom of the screen.
Clicking an orb again to deselect it would be nice too.

But the bounciness and slow-motion is great and the polish really does shine through!

Cool idea! My tactic was to find some empty area and pass the ball as much as I could before the triangles got close :D

I would prefer if everything moved a little faster and if there was an indication of where the next square would spawn from.

But I like the slightly trippy visuals and the cleanness of the game :)

Also, thanks for adding SilentWolf to the description - I'll be taking a look at that

Thanks for playing! Sorry about the sound :D

I had my volume at 2% when adding sound so I forgot to turn the game's audio level down. Oops :)

Not sure why the audio is popping - will look into that

Really enjoyed this one!

There were a lot of great levels from such a simple mechanic :)

The original was good but this takes it to a whole new level! You can really see the work that went into this. The story mode is great and the choice of music is excellent. On Infinite Mode, I got:

I'm glad you went over to polish this and it gives me some motivation to clean up some of my old games too :D

I like the idea of a second weapon - that'd be cool!

The table is meant to be the main obstacle but there are a few ways to overcome it:

Very simple but fun
Got about 20 seconds but the timer continues after you lose :D

The turret looks amazing!
Surprised at the amount of work in a short period of time.

My only suggestion would be to have smaller/fewer displays in the turret.
They took up the peripheral vision and the camera, although it looked cool, wasn't really necessary.

Nevertheless, it was very fun to play :)

This is really fun but a little easy.
My opponent and I would press our keys at pretty much the same time so it was a stalemate most of the time.
I think a little variation and speed increase would add some challenge.

But overall, the game is very clean and has brilliant art!
It also looks a lot more relaxing than it actually is :D

Might be better if you zoomed out a little bit - couldn't see where all the bullets were coming from :D

A lot of mechanics and even a tutorial!
A little tough to start with but it really gets you thinking.
Well done :)

Thanks :)
Spent quite a bit of time on the upgrade system so I'm glad it paid off

After posting my comment, I thought I'd try it one last time and got less than 1 minute! 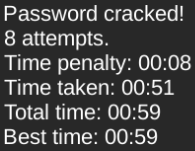 I want to start off by saying I very much enjoyed this game :)
But it could be better:

Speedrun, on the other hand, was awesome!
My tactic was to get all the letters close to "WOWIE" without getting any correct or getting hurt.
This made sure that there were only 2 cursors at that time.
I would have "XPXHD".
Then I would a char once to it's correct letter, die, change another char once, die and so forth to end up with "WOWIE".
I didn't collect any bits for revealing chars. 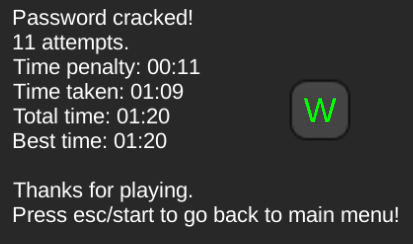 I could have done better but I'd spent enough time already :)
I had a lot of fun beating your personal best :D

Thanks for the feedback  - glad you enjoyed it :)

Yes, the poison heaven was the end.
The player finally reaches their destination where their unquenchable thirst for poison will be eternally fulfilled with self-filling bottles :D

Pretty enjoyable with the perfect atmosphere!
The difficulty ramped up after 500, with some speed demons appearing, which greatly added to the pressure.
I particularly liked the art and chaining explosions :)