Prevent the Panic at 711 by satisfying all the customer's demands!
Submitted by SnoozeTime — 15 hours, 51 minutes before the deadline
Add to collection 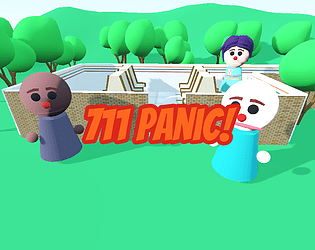 Stressful, but in a fun way! You did a great job introducing new game mechanics. Also, I love the variety of characters.

As you saw, I was confused about picking items up and putting them away: maybe more images in the first tutorial would have helped? It felt a bit hard for me: this seems like a good game for multiple difficulty options? Also, the movement was really hard (it felt hard to maneuver around). And it was very frustrating that you had to get into exactly the right spot before you can place the item. It would be great if the shelf was bigger or if you could stock from a different angle.

Fun game. The atmosphere in the game is fun.

Really fun game, great work!
It would be nice if it were a little clearer when you were holding an item or when the item was on a shelf - just overall clarity of what's happening in the game would be great, but overall it's fun!
Reminds me of overcooked, haha!

Overcooked is 200% my inspiration !

Very fun game, congratulations! It's hilarious, just one thing that got me was when you fill the bar to fix something or sell something that you needed to wait for it to complete and need to wait a bit more for some reason.  Also, after pass the level that the counter moves you just fall on gray, is it on purpose? Really cool game, congrats!!

Fun shopping game! I like the mechanics you've put into the game, good job

interesting game, took me a bit to understand. Why don't the customers wait at the cash register, the food is closer and would be faster for everyone haha

There is no logic in japanese convenience stores :D

That was a pretty fun game! It's got some fun details like customers breaking shelves. I was very confused at first because there wasn't a lot of feedback that I'd picked something up, or that I needed to check customers out by holding down the button. Overall though, pretty good!

At the beginning I thought that its going to be easy because of the music, but then t got hectic :D
The character creation and control settings are a really nice touch :)

This was quite a fun game to play! Reminded me a lot of games like Tapper… and, yeah, this dates me, given someone else said Overcooked (a game I never played).

The character movement was very pleasant, and, once I figured out how everything worked, the game was challenging and not stressfully so (at least, in the stages I played). I especially liked how you added a little extra mechanic with the ice cream as levels progressed, so the games doesn’t get stale.

That said, I was confused for a few minutes while trying to figure out exactly what I was supposed to do. Some of that was definitely on me, but, for example, picking up items from the crates has no visual feedback. I didn’t see items pop into my characters possession as it happens while the character is partially inside the crate. For a while I was trying to push the crates, thinking I had to break them to get the items inside. I think, perhaps, maybe a little animation, like the crate doing a little shake, and/or a little sound effect just to indicate something happened when the action button is pressed.

Also… no option to quit the game on the main menu :D … lol. I know you want to keep your players engaged, but still… hehe. Not a big issue, but given my computer is setup in a way where I do not actually play in traditional “windows”, having the option available is nice :D

Thanks for the insightful feedback. For sure, I need next time to get better with the tutorial and the visual feedback. It looked enough to me but of course it's because I played a lot :D

Nice game. And an nice touch with gamepad support as well

A fun little game, music and sound are great.  Some sort of visual indicator to see the mood of customers would have been appreciated.

Submitted
The Seven Trials of Chronos
LikeReply
SnoozeTimeDeveloper1 year ago

Thanks for the feedback !

This game is very entertaining when watching others playing it! I laughed so hard when customers destroyed the shelf lol

haha love it! Respect for retail workers... this is super hard!

The audio and the whole feel was great! Well done! Ioved how you used the Staying Still wildcard on the counter! Nice!

Great progression in each level. That counter moving around made laugh. I hate when counter do that... The character creation and input re-mapping was a great touch!

Wow, super good game. I feel this is how it would be to worn at a convenient store. This would be really fun multiplayer.

One problem I think it's not possible to fix shelves while holding an item.

Thanks for the feedback. That's on purpose but I guess I should have added more feedback (error sound?) to show that..

I see, I thought it's a bug because the shelves can be full and you can't get rid of the item in order to fix the shelves. In other words, you can get stuck and wait an unreasonable amount of time, or maybe permanently?

There is a garbage to free your hands, but that's absolutely not obvious. I think next time I'll introduce mechanics a bit slower, but that's also a challenge to keep people entertained enough to stay until the end

really fun game with cute art, its cool to see a 3d game made with godot that plays so well in the browser. I ran into one issue where I couldnt complete a sale with the jock/punk customer but everything else was super smooth.

Submitted
7 and 7
LikeReply
SnoozeTimeDeveloper1 year ago

I am surprised as well that it plays nicely in the webbrowser ;D Thanks for the feedback