7 voices. 7 suspects. 1 magical item. Solve the mystery of the missing amulet in this visual novel!
Submitted by cmd16 — 12 hours, 35 minutes before the deadline
Add to collection 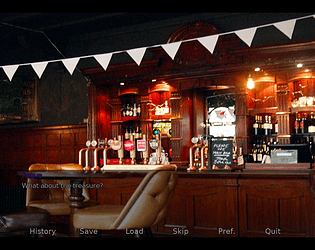 Only the second visual novel entered to GWJ, as far as I can remember! The mystery was intricate and well thought-out, and I had fun trying to piece it together. That said, a few (constructive, I hope!) criticisms:

All in all, though, it's still an impressive entry, and definitely one of the most unique.

With the wrong questions I was trying to hint at it with the fact that two questions had the exact same wording at the end, but I guess that wasn't as obvious as I thought.

The 1, 2, 3 options was because I couldn't get the buttons to show up properly when the text was longer. It was a clunky workaround, but I didn't have another idea. And as I said, the voiceover with  that is a bit bugged.

Thanks for the detailed feedback!

You're the first to mention difficulty telling the voices apart. The "me" voice is not very distinctive since it was added last minute for accessibility. I could see mixing up the Wizard and the Rogue, though I did give them some variety in pitch, tone, and mannerisms. I'm surprised the Sorcerer doesn't stand out since I did give her an accent too (British - basically what I picked up when I lived in Harrogate which is near Yorkshire), but maybe the accent is a little too understated lol.

An interesting game with a lot more content than I was really expecting, but definitely some good content overall.  Not too complex in my opinion for the story, but it definitely tried to throw a lot of red herrings and there were a few.  I ended up just going with the best guess I had though and from what I understand it was correct.  There was definitely a lot of information being thrown around though and a lot of it made sense and confirmed/denied different stories and such.

The one thing I would say from what I did where I talked to most of the characters is that their dialogue never seemed to really interact with each other.  Unless I just missed it, I never really got any indication that I should go ask someone else, they always seemed to confirm each others stories no matter what.  Which kinda removed a lot of the mystery since no one seemed to be lying.

It was definitely interesting seeing what looks to be a.. add-on?  Library?  (I'm not sure) for Godot being used for a Visual Novel.  I really didn't know something like this existed.

To finish off since I'm already going for the wall of text, I do wanna ask about the background images cause at least personally they kinda detracted from the image the game seemed to be setting.  Since it was only 3-4 images max being shown without much to mix it up.  Especially without any character images to help offset the blank seemingly stock backgrounds.

Thanks for the detailed review!

Yeah, I may have gone overboard with the red herrings lol. A lot of things that seem like red herrings end up being relevant in some way, but not all. I was basically going for a bit of information overload so it wasn't obvious what was significant, but I may have overdone that.

It was tricky enough to get a coherent story in the limited amount of time. I didn't feel like I had time to make interactive dialogue like you suggested, but that would be cool for a project where I had more time.

The addon is called Rakugo. It's pretty straightforward to use and saved me a lot of programming overhead.

I have no art skills and couldn't find good character art so I figured background images would make the visuals less boring (and help people keep track of what question they are on). You're the first one to say you felt like that detracted so I'm not sure how common that opinion is, but that's good to know. I wonder if you would have rather had it with just the tavern background and no other images? Also, I think when I was adding backgrounds I was thinking kind of like Oxventure D&D does:

What a huge amount of content. How many lines of dialogue did you write? I was struggling last jam with only a fraction of that :) And the voice lines. Really impressive amount of work and polish.

I enjoyed the story even though I could not figure it out in the end. Hope to see more from you!

Depends on how you count, but I have 365 "say" commands (each "say" command is a new box of text on the screen). I spent the first several days writing the dialogue, and another few days recording voice lines. It helped that I was able to offload a significant amount of programming work to Rakugo (the visual novel engine), but there was still some programming work to get from dialogue in Google Docs to dialogue in game.

If by "couldn't figure it out" you mean there was some sort of issue such that you couldn't get to the ending, let me know and we can troubleshoot.

Very entertaining visual novel. Now, I’m coming to this game from the angle of someone who’s never actually played a visual novel…

I really liked the voice work. The audio was clean and clear. The acting was very nice, especially given the limited time of the game jam. The story (what little I did play, so far) is fun and interesting. I also liked the voice-over given to the menu options when accessibility is enabled. Here are a few observations though…

1 is due to the engine, but I could probably change if i work at it

3 is a known bug that I added to the game description after you played the game.

The music was really nice and the voice acting was very good! I really enjoyed it, and the story was nice as well.
Plus, I'm happy to see I didn't have the only visual novel style of game in this jam, haha!

Yeah, visual novels aren't common in jam games I feel like so I was like let's give it a go!

The background music fits the game well! I would not expect having narrative voice in a jam game! Good job! I just watch others streaming this game as I do not have time to play it by myself and the game is quite lengthy to me.

Thanks! I took a while searching for the right music to fit the mood I wanted. For my latest few games I've tried to include voice acting as a chance to practice and show off.

Glad you were able to experience it through the stream! Maybe next time I should make a shorter game lol

Realized the credits may be misleading about the music: I didn't write most of the music. The only bit I wrote is the first few bars of the detective music.

I had a crash somewhere in the middle of the game, but I just carried on where I had left off. That certainly didn't go where I expected it to go! Music and voice casting was really great.

That audio bug is something I'm aware of and probably could have handled more gracefully. I think it only happens with the audio that is chained together (e.g., "1", "[text for option 1]").

And yeah, I thought I got all the voice bits but I'm sure there are still a couple I missed.

The writing and voice acting really made it seem like 7 different voices! must have been a *lot* of work. A little buggy in general but no big deal. I notice that the end handles a lot of different situations gracefully. I hope you feel really good about this!

Yeah I was like "let's make a game to play to my strengths lol". And yes, I gave some thought to how the ending would handle various situations because I feel like having a variety of endings (even if they are pretty similar) is good for a visual novel.

Nice one! For me there were no crashes. The voice acting and the pictures are amazing + nice story - great idea for a visual novel and good job!

The voice acting was truly wonderful. Great job giving each character a voice and personality! I did have quite a few crashes, but made it through! I couldn't seem to get the save/load to work.

Sorry to hear you had crashes, but I'm glad you were able to get through and enjoyed the game! As far as I can tell, the crashes have something to do with the Rakugo addon that I was using. I think maybe I had so many things loaded that sometimes it just gave up lol.

I didn't get to debugging save/load because it's not really necessary for this game, but that's good to know that it wasn't working out of the box.

Thanks! I was encouraged by the positive feedback on my voice acting last GWJ, so this time I decided to make a game that makes good use of that skill. It took so many hours smh but I think it was worth it.