2D Action Adventure - Cross The Seven Seas to regain your Soul
Submitted by CroSnake — 1 hour, 2 minutes before the deadline
Add to collection 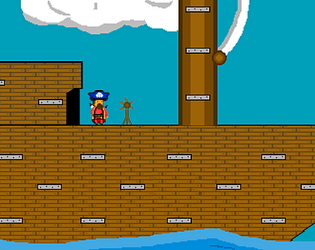 Wildcards Used
GOOD THINGS COME TO THOSE WHO WAIT, DARE TO FAIL

Some assets look like had to be pixelated but you didnt remove the filter in the import and it got blurry, also the controls are really hard to get used to. Solid entry!

The game is cool but it got a lot of problem like the controls which feels very clunky.

Cool game! For a game with Dare To Fail, it definitely felt a bit unforgiving though. I lost levels enough times that I eventually just gave up, which is sad cause I wanted to see the rest of the game. I think one of the big challenges for me was that the platforms were so tiny. Longer platforms (i.e., more maneuverability and harder to fall) would have helped. Gameplay and story were interesting, but assets could have used more polish.

Thanks for playing and for the feedback! Due to lack of time unfortunately I didn't get the chance to fine tune the difficulty enough. In hindsight I do wish I had included extra platforms in the gaps between them, made them broader or included more ice tiles to stand on as this is an unnecessarily frustrating part of the game. Definitely thanks for the comment!

This game is a mixed bag for me. I can definitely see ideas in the game that would make for a great game, in my opinion, but a lot of things just seem to fall flat for me. I totally understand that a lot of this could be because you didn’t get the time to fully implement everything you had in mind, and I totally relate to that, but here are my observations…

Over all, like I said, I liked a lot of the ideas in the game. If they get fleshed out, this could be a very entertaining little adventure! :)

Thanks so much for playing and the elaborate feedback! I want to address your points:

1) Indeed, I was going to implement it so that the boat gives the player the same speed it's currently going at for more realistic and easier maneuverability, but I saw many other issues coming up with that and I didn't have the time anymore to spend so much time on this, even though it really is one of the really important things, as you spend 99% of the game on the ship, so then I left it with the adjustment for the speed, which works kinda OK if you put the ship on its lowest speed

2) The dying in combat (i.e. seagulls drain all your health) and the ship sinking by taking too much damage both have the same outcome: You turn green ("Zombie" since you don't have a soul) and you're able to still complete the level - this is for one of the wild cards mainly where "Failure is just another path to victory". Only falling off the ship means certain death and you have to restart the level. However, in order to unlock the 7th and last level, all first six levels need to be completed without dying first. The character does point it out in level 1, but it should have been better explained

3) I did have an issue with the player's hitboxes, that at times other instances' hurtboxes wouldn't react to them if the hitbox is already inside it when the player hits, though I do seem to set the "deferred" value correctly for the hitboxes, but that's definitely something I need to look into. The player himself becomes invincible for a short period of time (while the player flashes), a state of invincibility, but this state could be a bit longer. Thanks for pointing that out!

4) While I developed the game, I intendedly placed most of the dialogues in the beginning of the level so that the player could easily reset the game to read through the dialogues again. I also didn't want the dialogues to show up somewhere where they would obstruct the player's view on important areas of the ship, but I agree I could have solved this better (with more time, same as everything hehe)

5) Gotcha! I was hoping that the icons would be self explanatory, but I agree that it would be better visible by changing the icon to one plank only each. Point taken

Thanks very much for playing and the feedback! Much appreciated

Grats on implementing so many mechanics!

Visual and audio aspects could be much improved.

Would have been nice to be able to speed up the dialogues by pressing a button.

Thanks very much! The audio I did close to the end with only a few hours left and more or less just dumped them into the game, and yeah, I'm not a graphics designer but did what I could, even though I am aware of some flaws that I could have easily changed. The dialogues I was considering to implement as you point it out, but I feared that you would accidentally skip them, so I made a decision and left that feature out. Thanks for playing!

Thanks for playing and for the feedback! Indeed it's a bit tricky to get used to it and not everything works the way I intended it in the beginning, but the time limit kicked in and I didn't have time to fix everything

I enjoyed the game. Especially level 3 awesome job and can you port to windows 32 so I can play it completely

Happy you enjoyed it! Sure, feel free to play it on the browser for now (it should work fine there) but after the voting for the Jam is over I can upload a 32 version as well.

i like this , it was bit slow at the first game , and i like the controls i ,ASDW for movement  and JKLI for action is my type of controls

Thanks for the comment unkownzero! Yeah for the most part I designed the controls to fit a controller. If you download it, you can play it as well, only on the browser I'm experiencing issues with the digipad of the controller. This keyboard layout for me was as close as it could get to controller movement hehe. Happy you enjoyed it!

You have a pretty fun game here. It was a bit slow to start, but the second level was way more intense. I didn't particularly like the controls, but they worked ok. Story was fun.

Thanks for the feedback! The first level is mostly to get started and familiar with the ship, after that it really starts.

Fun game! I really liked that "BARRRRR" at the start, great joke.
One small note: it looked like the pixel art was anti-aliased, or at least it was pretty blurry. Was that intentional? If not, you can reimport the art in Godot using the 2D Pixel preset to fix that!

Thanks for leaving the comment and the feedback! Indeed, the pixel art got a bit blurry after I exported the different sprite animations from the program I've used (Spriter Pro). Not 100% sure if I need to adjust the settings in the program there, but the end result is always a bit blurry. Didn't mind this too much since the character is moving non stop anyway, but definitely thanks for the shout out, will look into that

I think it's the first jam game that I played with opening cinematic :)

I'm not sure if I played it correctly, as I only managed to complete 2 levels "legit", then I became immortal and only finished 6 levels like this.

Very unique gameplay, a lot of great ideas. One thing that was frustrating for me was drowning when trying to fix the ship as it was hard to aim for platforms, especially at the front with cannon colliding.

Thanks for the feedback! Happy you enjoyed it :)

Indeed, you can finish all the levels by becoming undead and clear the levels this way, but only if you finish the six levels without becoming undead, you'll unlock the seventh and last level. And yes, I was considering putting a mechanic that would have you move with the ship, but decided to leave it out to put more focus on having to slow down the ship to navigate more precisely. But indeed, the collision with the cannon was actually the last thing I removed recently, but unfortunately it didn't make it into the final game.

Thanks for the feedback! Glad you enjoyed it!

Thank you for playing! Glad you liked it!

Nice one! Was so happy when I went to ghost pirate mode:) Great opening scene too.

Thanks for playing, happy you liked it!