Descend, as the ground breaks beneath you. A Godot Wild Jam #32 submission.
Submitted by Vikfro (@VikFroWasTaken), MunroMunro — 1 hour, 2 minutes before the deadline
Add to collection 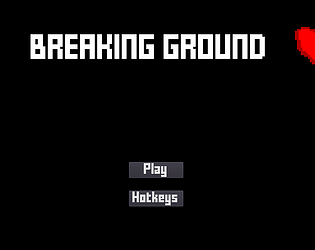 Game Description
It's a short action platformer where you battle your way through a pit filled with monsters. Each layer of that pit breaks every 7 seconds, making you and remaining monsters fall to the next layer.

I hate the friggin birds! :) Seriously I can't not die to them at least once on each session. But really, this is a very cool and polished game. And fun too. I kept dying at the first appearance of two enemies, but I guess I just need to git gud. Not enough time for that though!

Cool game! I loved the music and how the animations lined up with it. There are a few things I would like to make the game easier (because I am not skilled): checkpoints so I don't have to start all the way at the beginning, and more lives.

I would also have liked to see more variety in the type of platforms and enemies.

Please put your music in an autoload next time so that it doesn't start over from the beginning each time the level restarts.

Hello, thanks for playing, and for streaming/recording your gameplay.

The game is more of a prototype of a core gameplay loop, which would be part of a bigger experience (bits of narrative framing, multiple characters, multiple visits to monster pit, etc.)

We had to trim a lot of this down, to get something partially finished for the jam. So we focused on getting a playable monster pit, with a small variety of enemies, and one character.

Checkpoints aren't conducive to the tone we're going for; as each character is only meant to have one-shot at the monster pit.
The music also always needs to start at the same point, to allow the rhythm to match up with block-breaking.

The problems you've described would have been lessened by the inclusion of the aforementioned narrative beats & changing characters, as the player would have had breaks in between gameplay sections.

However, since the narrative & other characters are not included in this prototype, the game is more frustrating in it's structure than it was intended to be.
(I also rushed the Player-Animation & Attack Collision, leading to a lot of players commenting on the game's difficulty. This was a mistake on my part. I should have increased the size/collision of the player's hammer.)

I enjoyed watching you play, and was surprised that your "avoid enemies" run actually got you further.
I also noticed that you always aimed to fall on the bottom floor, and never the raised platforms, which was interesting. I suppose by separating the play-field, I inadvertently made gaps, which may be more satisfying to land in, rather than on the raised platforms.

We'll be working on and updating the game post-jam, so take a gander in the future if you're interested.

I loved this game, so simple but so addicting. I absolutely loved the SFX and the music - I think the music made me so anxious to get to the next level down. I wish that I had the option to break the blocks sooner, but I guess that's the whole point of 7 seconds :) Nice entry!

Hey, thank you for playing, glad you enjoyed it.

It's good the music made you anxious. I also felt like blocks could be broken sooner; but in later stages the amount of time is paced to enemy difficulty a bit better. It's mostly a prototype of the core idea, that can be refined after the jam.

We'll be working on/updating the game post-jam, so keep an eye out if you're interested.

Apologies for the late reply, we haven't yet dedicated a lot of time to an update.
(But we are making slow, steady progress on one.)

If you follow my itch.io, I'll be sure to send you a message when the game is fully updated.

Really cool experience, I enjoyed it quite a lot. The way the music syncs with the platforms disappearing was really cool.
Few small notes: Having some screenshake and other juicy effects that goes along with the disappearing platforms would really sell that effect of entering the next level. Also, I felt like the hitbox of my hammer attack was a little small. It might have lined up perfectly with the sprite of the hammer, but in general I find that games feel a lot better when those hitboxes are a little more generous in the player's favor. Could also potentially add some screenshake or other VFX when the hammer hits the ground, just to make the player feel powerful.

Thanks for playing! Yeah a little screenshake, particles and other juice could have been very nice for little time invested. We’ll keep it in mind for the next update!

We indeed did not have much time playtesting, we’ll probably improve the hitbox and update the sprite to better reflect that (it’s bigger than it looks).

Nice game with the sounds and the idea of the breaking platforms, reminds me a bit of Downwell. Good concept!

Thanks for playing! Didn’t know Downwell, it does look similar in gameplay and atmosphere. Maybe Munro does (it was his idea). We’ll take a look for inspiration :)

Great game! Loved the rhythm and feel of it.

Thanks for playing! We’ll definitely improve the visual side and difficulty in a post-jam update.

Hello, nice game, I don't know if it was intentional but the music gave the felling of the floor breaking at the start, it was very cool. I wasn't very confident on trying to kill the enemies since it looked like I always would take a hit. Cool game, congrats!

Thanks for playing, yes the music’s BPM is intentionally timed to the 7 seconds so it is in sync with the platforms destroyed. It’s also built from different rhythmic patterns that add onto each other. The hitbox of the attack could be bigger. Skelly should have more time before launching his bone and the minotaur stun duration should be increased.

The pace felt so good and the music worked perfectly with the gameplay!  Really nicely done!

Thank you, I'm glad you enjoyed the pacing.
The vision of the floor breaking on a timer with this music style was the original kernel of the idea, and I'm glad people seem to enjoy that aspect.

We'll be updating the game in the future, so keep an eye out.

Thanks for playing! Glad you enjoyed the music timing and overall pace. We’ll update the game to improve the visuals and implement more mechanics we wanted (multiple characters and small story sections).

Nice game! I really liked the music being synced up to the gameplay. It builds tension and motivates you to keep playing.

One suggestion I would have is adding some kind of feedback when you hit enemies with more than 1 hp(just playing a sound would be fine). It took me a while to figure that I just have to hit the ramming enemy twice. At first I assumed I have to hit him when he hit a wall and  is paralyzed and got killed alot of times.

Hello, thank you for playing.

It's good you felt the tension/motivation increase as the game progresses. This was a major theme, so I'm glad it translates.

We were rushed for time towards the end of the jam, and so some of the feedback may be a bit wonky. I also had problems with the ramming enemy in regards to feedback, and should have changed it to 1hp to avoid confusion.

We will be updating the game in the future to something more substantial, I hope you'll be interested in it then.

Thanks for playing! Good suggestion to add some visual/audible feedback to hitting an enemy.

The rhythm of the ground breaking background music fits the 7 seconds countdown very well! Interesting concept but I feel like too harsh to reset the game after dying. Showing the current level of floor may be a good indicator of achievement in my opinion.

Thank you, the image of the ground breaking on a timer was the original kernel of the idea, so I'm glad that has come through strongly.

I agree that the game is too harsh at the moment.
Currently, the game is more of a prototype of a larger idea; in which multiple characters would each fall into the Monster Hole, separated by short narrative sections.
We had to trim these ideas however, due to time constraints.

We will be updating the game in the future to be more substantial, and in line with the original vision.
Thank you for playing

thanks for playing, yup the game is a bit too hard. There is like 15 layers before the end. We did not have enough time to playtest thoroughly but should have quickly implemented health powerups or checkpoints!

Thank you, and thanks for playing

Nice game, although it feels annoying to restart every time you die, especially if you are a bit further in.

Hello, thanks for playing.
The game is more of a prototype, to test the main idea of the "Monster Hole".
It restarts for playtesting purposes, although I can see that this is annoying from a gameplay perspective.

Originally, the game was to be divided into different characters sections, who would each go into the Monster Hole one-by-one, with short narrative segments to break up the gameplay.
This proved to be an over-scope however, so we trimmed the game down to what was feasible in the time-frame: one character, no narrative and a playtest of the Monster Hole.

We're looking to update the game in the future with the above structures though, so keep an eye out if you're interested.

sounds good, its an interesting idea so with some tweaks im sure you have a great game :D