An absurd math adventure
Submitted by Nisovin (@nisovin) — 23 hours, 57 minutes before the deadline
Add to collection 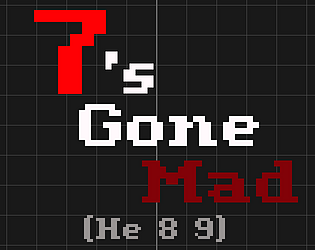 Well a friend recommended this game to me, and I definitely don't regret playing at all.  This was a really fun... I guess platformer "roguelike"?  With the weapons and stuff.  The overall theme was throughout basically the entirety of the game which was crazy.  The amount of variety in enemies and the cool ideas behind the weapons were awesome.  Basically all the weapons made me want to use them, even if I did end up spamming the infinite ray to double damage the boss...

If I was to comment on a few things that felt a little weird to me.  It would be the system where you are stuck to a platform moving up etc. because a lot of times it messed with me and getting off of it was a little involved.  Not too difficult, but it did feel a little sticky sometimes.  Especially since you aren't able to use the S button on the walls.  Plus the controls changing, though that only really surprised me once.

Other than that tho, 7 is freakin hard.  It took me sooo many times to just survive without falling off the platforms while avoiding his attacks.  But he was definitely fun to fight.  Overall all the bosses were fun.  Heck, most of the enemies were unique, made sense and had their own unique attack patterns, health bars (that almost made sense) etc.

You really went in on the fact that this was a math based game.  The setting with the platforms listing off their location, the enemies with their designs, attacks, health bars and specific animations.  Not to mention the massive variety of numbers used (how'd you do that anyway?).

So far my one of my favorite games in the jam for sure.

I'd love to rate this! yet I couldn't submit sadly 😔 but I really love the math references and the boss fights would like to see this continued it looks like it can be a hit game! the weapons and stats were very witty. The balancing was of the weapons were executed greatly. but the 7 boss fight was a bit too hard yet still beatable. Overall very cool game!

This was amazing! I legit gave you 5 stars on everything because there was nothing that I felt I could bump down to 4 stars. It was just that great! There are still areas for improvement of course. I would like the final boss fight to have been easier: I would like more health (or less boss damage), but the biggest difference I think would be giving me more space to move around (and making it harder to fall and die). More weapon slots would have been cool too, ideally so I could hold on to one of each type of weapon. But yeah, incredibly well polished and entertaining! I'm amazed you managed all this in such a short time frame. Would totally play more if this became a series.

Very creative design especially the math weapons. Fun game play and animations. Maybe it is just me but I have a bit difficulty in control as I am not used to 2D platformer jump + mouse aim and click at the same time.

Pretty good entry. Nice to have linked maths & RPG though I did not understand how the stats of the weapons influenced them (addition/multiplication/… things).

Did you really use those equations for level designing (as in you input them and the game builds the platforms)? Or are the equations calculated from the platforms’ position?

I liked the original graphics and overall original universe.

Also great to include all these settings!

The equations are calculated from the platform positions.

Game about math, what's not to love ! Great game!

The idea of formulas as stats is by far the most unique game mechanic I've seen in ages. Gravity being normal to individual surfaces and the fact that this affects weapon functionality is a nice touch as well.

If there's anything that could stand fine-tuning, the ray-casting weapon pausing your character's physics is simultaneously very strange and at times can be a bit cheap; perhaps there's a way to make your character continuing to move while firing it change the weapon's effects?

This game is awesome! I would've never thought shooting numbers would be fun. A bit confusing for me in choosing my best weapons. (probably because i suck at math)

Haha nice, when I saw the theme I have thought of the 7 8 (ate) 9 joke, but could figure out how to use it :D Great job!

Lovely platformer with satisfying weapon design and gameplay. Also creative use of the theme :)

For some reason the game crashed for me on the second bossfight though(Segfault). I had a similar issue with my last jam game where I used coroutines and didn't stop them before freeing a node, but looking at your source code I think it's caused by something else.

Really good!  Most creative use of the theme I've seen yet.

Cool aesthetic and good math jokes. What more to say?

Submitted
The Seven Trials of Chronos
LikeReply
ShovelSubmitted1 year ago(+1)

Really awesome, super well executed. I loved the graphics, the aesthetic was one point. Super fun game.
Final boss fight against 7 was waaaay too hard though, took me a whole lot of tries and stopped being fun by the end, heh. Other than that, really awesome game!

Thanks! One thing I wish I had done was implement the other wildcard, and add a stacking buff every time you died to a boss. That way if it's too difficult, it would get easier over time. Oh well, too late now!

Oh, my god! I never expected something this good. Really nice! I've saved it to come back to it later. Very well done.

I'm not quite sure how I passed the second boss though. I got stuck in the wall and then I was at the Plain of Equivalence (did I mention that your game is very funny too?!).

Thank you! Yes, there are definitely ways to glitch the game and bypass stuff. The way I implemented movement is a bit weird, so there are some bugs sometimes.

Awesome idea and execution. 7 is a b***h, took me ~20 tries before I had plan for his every attack and managed to kill them.

Amazing variety of weapons and boss battles. One thing that could be improved on is the visibility. Some attacks are hard to see and function description under each platform is nice (I HAVE to see the source code :) ), but could be less distracting if opacity was decreased. This is just a minor nitpick, as if the visuals were better, and some more polish added and balanced, I'd pay for it. Such unique idea!

Really good idea! The game is fun and the graphics are cool! I loved it!

Hi  Nisovin, I really liked the concept and the variety of weapons. I liked the boss battles, and how the respawns were close by. It was real fun and enjoyed your game. My favourite part was the mid-jump pause while using the infinite ray. Excellent work!

Pretty cool! The final boss is pretty unforgiving. Definitely beatable (only a sliver of health left third try), though sometimes I wonder if the difficulty was because maybe I wasn't using the right guns?