A Stealth Game about stealing the 7 Dragonballs *Cough* Mushrooms
Submitted by EroAxe — 13 hours, 43 minutes before the deadline
Add to collection 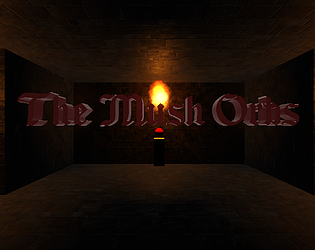 Wildcards Used
Good Things Come To Those Who Wait, Dare to Fail

Fun experience! Nice work on this one!

Nice stealth action in a labyrinth! I like the effects

Some sound would go a long way, steps or something to set the mood. The browser version played well I didn't notice any problems other than crouching while going forward closed the game tab and I didn't know what happened for a few seconds :D

Interesting... I'm gonna have to test that.  To be honestly I spent most of the jam trying to work on the enemy AI so the rest kinda was made and forgotten so I half forgot that I added crouched for most of the jam.  Sound is definitely something I would have liked to have in, it definitely helps in a stealth game.

Nice concept. I think the the game could be improved if you put a roof instead of a gray area and some music as well

Ah yes, unfortunately I didn't get around to putting the "roof" on, since I was very much rushing, but yea... a roof would be nice.  I was marathoning to finish the jam so I didn't end up really having the energy to go over and add roofs everywhere.  Definitely gonna be part of a post-jam patch though.

A couple times I walked around the corner right into a “badger” and jumped :)

The light mechanic seems solid, movement is smooth. Would definitely benefit from some minimap or indication of where you’ve been already as well as some audio.

Way to stick with it. Keep it up!

Submitted
The Seven Trials of Chronos
LikeReply
EroAxeDeveloper156 days ago

That's good to hear the light was actually one of the simpler things to pull off since it's just an area checking distance after I realized I was way overthinking by vision system and just used a distance_to to help with it and then basically reused it for the lights and went from there.  I definitely need to put in some sort of minimap though, cause the game is very samey right now.   Which makes it really difficult to search the maze even in the small test I had I ended up having to cheat with the editor window to check.

That’s a great solution to the light mechanic. I too was thinking of over-complicated ways you might have done it as well!

“even in the small test I had I ended up having to cheat with the editor window to check.”

Yea I had someone from my chat essentially gift me the idea and I just kinda sat there surprised as I did what I'd been struggling with for 2 days, in like 3 lines of code.  It was a uh... a moment for sure.  But it's also definitely code I'm gonna be remembering.

keep it up! it could grow into a solid game

Hi EroAxe, that maze was huge. Wish I had a map. I liked the visibility gauge. Wish I could turn up my mouse sensitivity on it. I liked that some of the lights turned on and off, it added more difficulty. I also really liked the tutorial, it was set up very well with the timing of the enemy. Good job.

That's awesome that you enjoyed the visibility bar, I ended up throwing it in faster than I would've liked but I also knew there needed to be a visual indicator for how light you were.  Especially considering I was having issues with it myself.  As for the lights popping in and out it was actually a somewhat unintended side effect of hiding them when they are too far from the player to try and help performance but ended up being a nice "lighting" effect.

Especially considering they were supposed to torches lol.  As for the tutorial it's good to know it was helpful, though the enemy timing I can't take credit for, he's set on the same patrol system as every other enemy and just sometimes shows up right as you walk out there.  But it was definitely intended uh huh.

Great job on this. The enemy AI made them pretty scary

Those darn badgers can follow me everywhere! I got so lost trying to find the 7 sacred dragon *cough* I mean mushrooms. The maze did it's job :P

Yea the maze even got me lost in the few bits of playtesting and I made the thing only a couple minutes beforehand in my final rush to throw together a level.  Happy someone got the very well hidden reference though for sure.

The html5 version does lag once you get past the tutorial as stated in the description and thus I recommend for those to use a standalone download if possible.

- UI doesn't scale when going full screen, only affects standalone as browser did not have a full screen button

- Two of the patrolling enemies ran into each other and when they did, they prevented each other from continuing their patrol route. I like to think they stopped for a bro hug and got carried away in conversation :D