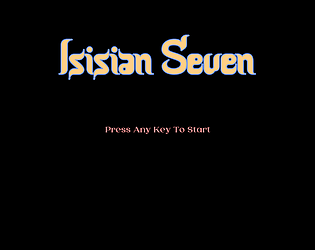 Game Description
You play as the Godess Isis's seven guardian scorpion warriors in a future environment. Each scorpion only has one weapon. Upon death, the player/scorpion can revive as another of the seven... and, thus, use a new weapon.

Very cool game! Good job with this one, Blk. I really liked the whole asethetic of the game - I think it's very original. The graphics had a charm to them! Roaming the ancient halls weilding a magic staff felt pretty badass.

But, I found shooting from your staff to lack a lot of punch. At first I didn't even know it was a magic staff. I assumed it was a melee weapon due to the lack of projectiles coming from it. Adding some projectiles that fire out would be a great edition! Also, the combat too lacked a little punch. Juicing the game up a little bit so there's more feedback when you hit an enemy would be very nice.

I do think it's insanely impressive that you made a 3D game like this in such a short time frame however! I understand maybe a lot of those things couldn't be added in time due to the magnitude of creating a 3D game. Anyway, fanastic stuff, dude. Keep it up!

Hey! Thanks very much for giving the game a try!

The shooting was, indeed, very very raw and I simply did not have time to spruce it up. Projectiles (or, at least, a muzzle flash) was intended… a lot of things, to be honest, were “intended”, but I just did not get the time.

Thank you very much for your feedback! I appreciate it!

I liked the atmosphere the opening narration of the game gave off, and for a first attempt at 3d, it’s well done! My favourite part is probably the techy-egptian feel of the soundtrack and it worked well with the theme of the level.

I did get a bit confused when I died though, I thought the game was glitching out, so some indication would have been nice.

Overall a good start, would love to see this worked on in the future!

Thank you very much for giving the game a try! I appreciate the feedback.

I agree the “death” state is really bad. I simply didn’t get time to go back and fix it up before the end of the jam.

Again, I thank you for playing!

Wow, the art style of this game is gorgeous! I really, really like it.
I hope you keep working on this project, I'd love to play through a more complete version!

Thank you very much! I appreciate you taking the time to give my entry a try!

BTW… I actually just finished a twitch stream where I played your game (forgive me, though, as I did not get very far; my voice was starting to die on me). If you’re interested in checking it out, you can find the stream here and I started your game at time stamp 2:25:30

I just went and watched! Really unfortunate timing that your voice was dying right when you got to my incredibly dialogue heavy game, haha!
I appreciate your comments, I didn't even think about adding a quit option, what an oversight, lol.
Also, didn't even think about adding a description to the main page either. I'll probably do that once I finish playing and rating the other submissions to the jam!

Too bad you weren’t able to finish it, but good for you for taking a stab at 3D and figuring out Blender. One day, I hope to try that as well!

I like the style, hi-tech Egyptian is super cool. I found the controls overly sensitive, and wasn’t quite sure how the attack worked. Sometimes it seemed to hit and other times I seemed to get stuck on the enemies.

Obviously there is a lot more that could be added to the game, and I’m sure you had a lot more in mind. I’d love to see your completed vision for this game! Keep it up.

Submitted
The Seven Trials of Chronos
LikeReply
cmd16Submitted1 year ago

A bit too unfinished to be enjoyable, but I'd love to play a completed version of this!

The map is so awesome in this game. And it was pretty immersive! It reminded me of Goldeneye mechanics. I think the hit animation could use some work though.

Thank you very much for playing!! Yeah, I think all the animations need some work… lol! I appreciate you giving the game a play!!

Hi ObsidianBlk, I really liked the Goldeneye feel to it. I liked running around and shooting things. It was hard to maneuver at first, as the mouse sensitivity was high for me, wish I could remap it. But I eventually got a handle on it.

-The game freezes when I die, so unfortunately, I only played as one person.

Hey! Thank you very much for trying the game out! To be honest, I only just tried the “tileset” I was using for level design to make stairs maybe a couple hours before I had to submit the game. The navigation mesh looked to support stairs, and in my limited tests, the enemies did seem to use them… though, to be fair, I think I only tested them chasing me DOWN the stairs, now that I think of it.

As for dying… that might not be a freeze. It was never made clear in game, but the player has no “death” animation. All movement is just stopped. However, pressing the space bar SHOULD free you up again with a new attack (there’s no visual change except for the attack animation).

In any case, I thank you very much for trying out my game!! :)

I did ran into a few problem with this game. Moving around seems fine (WASD) but when I ran up to an enemy and used left mouse button then nothing happen to the enemy and suddenly everything froze

Unfortunately I had a lot of troubles playing the game, but I did enjoy it and it seems well made! Personally I don't have any experience with programming / designing games in 3D, so respect for trying it out and a good first attempt!

I’m sorry you had troubles. Was it trouble in the game itself or getting it running? I know the game as many issues, but I’d still be interested in what specifically was giving you issue!

I really appreciate you giving the game a shot!

I’m actually doing a twitch stream ( https://www.twitch.tv/obsidianblk ) where I’m going to be playing entries to GWJ… I’m adding yours to my list :D

Loved the anubus enemies. Great job with the graphics and animation!

Thank you very much, I appreciate you giving the game a whirl :D Just an FYI… I’m going to be doing a twitch stream ( twitch.tv/obsidianblk ) in which I’m playing entries from GWJ. I’m adding yours to the list! :D