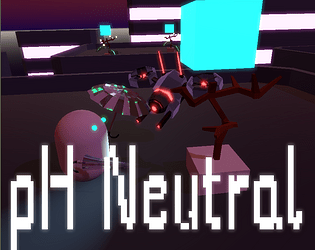 Lots of fun, but I felt like kept running out of money towards the end. I would like money and health regen over time instead of having to run to pick them up, a larger area to move around in, and better turrets. Also, is there any way to tell the plant status besides red/green colors? Cause that's a bit rough for colorblind people.

The ramp / difficulty curve is definitely off! I really need to improve my game balancing skills.

As for the plants, when plants have a low pH they start pulsing in size a bit. Which can help if colors can't be distinguished. Also, when the plant is close to dying there is an alert sound effect that plays for a few seconds and some radial particles that come out of the base. I actually had number of other accessibility ideas but just didn't have enough time to implement them all :(

Wow, this game is awesome! Amazing work! The art is gorgeous, and the gameplay is tight!
My main issues were that it was kinda complicated to remember all the controls, since there were so many different things I could do, so keeping those straight in my head was really tough. Also, the game's difficulty ramps up /really really/ fast, I would have liked more of a learning curve so I could get used to everything!
But overall, this game was brilliant. Really great job.

Thank you so much trying it out!

Wow, this being done in the time of the Jam is really something. Really good graphics, gameplay, idea, mechanics - love it! One of my personal Jam favourites

One word "Awesome" I love the sound effects the graphics everything. Great work

Very clever use of the theme! The game is very enjoyable and challenging! Graphics were well done, with everything having it’s own style enough that nothing got lost among anything else, even as things got hectic on screen. Some thoughts…

3a) The tutorial is good, but there are moments where it won’t progress until I do something, but it still would say “Press [Enter] to Continue”. Was a little confusing as the game was active while the tutorial was on.

3b) Look a moment to figure out how to disable the tutorial. That checkbox blends almost completely into the menu.

Really, though… over all… there’s not much that stood out to me as an issue. I thought the game was excellent and fun! Great work!!

Thank you so much for the in-depth feedback! I love it. Also, really fun watching you play the game on stream.

I do wish the plants had to be spaced out. Though, you and another play-testing friend both were excited about exploiting it as strategy :D

There is a little bit of vertical auto-aiming that lasers do to try and hit higher drones. Picture worth a thousand words?

It ended up working OK-ish, but you can still 'feel' like your laser should have hit. The making drones glow with a little outline would have been amazing... Where were you when I was trying to solve this problem haha.

All my friends had issues with the tutorial panels as well. This was the first game I tried to put the tutorial into the main game loop. Still have a lot to learn on how to pull that off well. Ended up sprinkling "if Global.tutorial" all over the code and it became quite goopy.

And, darn did you escape my game? I'll need to lock it down more next time :P

But really, a jam lesson for me is that both the title scene and pause menu should have a "Settings" menu. That way players can always find the full set of options.

The name, is great really stood out and I found it pretty hilarious.  The setup is pretty good as well and the genre mix up is executed pretty well I had a lot of fun trying to uh... definitely play legit by stacking endless plants on top of each other and then just getting all the gold.  As for some specifics tho:

Overall, definitely not the genre mashup I was expecting when I read it, but definitely enjoyable.  Personally I really enjoy the strategy of TD games so I'd lean heavily into suggesting more turret variants etc. but it's all up to you.

The changes to the turret would probably help a lot! They do seem a little weak especially as the game progresses. I really struggle to balance my games actually. Other than play testing, I wonder if there are some rules of thumb I could be following. Need to do some research!

The plant variant idea is great. I tried having the drone lasers hit all objects, but that opened up the strategy of sandwiching yourself between a bunch of plants and not worrying about drones at all. Plant variants would really open up a lot of possibilities.

For the rooftops, I originally planned to have zip lines between them. The idea would be you create a little plant growing engine with turrets protecting them and then move on to another rooftop. But then... suddenly it was Sunday :( Still recouping from my sleep loss haha.

Happy to see you noticed the slight vertical auto-aim :D

Okay first off, zip lines sound awesome if you update this with them I'm definitely coming back cause that sounds insane.  As for the wedging yourself between plants.  I can definitely see that.  Though something that could possibly help that I did just think of is maybe adding some sort of... "vertical" tower that could counter the addition of "bomber" drones or something.  Which could lead to the plant variants being helpful, while also balancing them to only helping against one drone type.

Also, I don't know if I mentioned it in my first comment, but there was a bug I found where you could endlessly stack plants on top of each other.  I don't think that's super balanced, but as I'm writing this I do think it could be an interesting upgrade mechanic.  Assuming you add some sort of auto aim that doesn't super conflict with the placing system.

To end off before I write another wall of text, it's always awesome to get a paragraph in response to a paragraph.

seriously though, if you add those ziplines I'm gonna be checking

interesting idea, I wish there were more plants and towers

2m45s :D pretty fun. Had some stutter sometime when spawning turrets but otherwise it runs fine.

The standalone executable seems a bit better, but still stutters too. Interestingly, the stutters don't happen when editing the project. It seems like the first time each scene (rain, drone, turret, etc.) are spawned, it stutters. Then it's good from there. I wonder if I could hide all this with a custom loading screen and secretly load all the scenes? This has effected another 3D game entry of mine too.

Solid game. Had some hiccuping with the performance at the start, but it seemed to get better as I went on.

Solid game, great interpretation of theme. Options in menu would be great to lower the volume.

Submitted
They are lost, You must help them.
LikeReply
PugByteDeveloper64 days ago(+1)

Glad you liked it! The pause menu (escape during gameplay) should have volume sliders. Mute, master, music, and rain. It's not on the main menu though :(

I really liked the idea but I think my computer was not strong enough to run it properly, I tried the executable and was getting really low FPS to the point were I could not really dodge or shoot reliably. The graphics look fantastic though, well done!

Thanks forgiving it a try!

I really need to learn more about Godot's performance profiler, I tried clicking around a bit in it but couldn't quite figure it out. Always something to learn for the next jam! Probably half of what I implemented could have been better haha...

Out of curiosity, what kind of machine are you using? Do you have a dedicated graphics card?

Here is what I'm running:

It's a pretty old system at this point but I was able to get a consistent 50 FPS in the game that we made so I know it should be capable enough for most of these types of Game Jam projects.

I really liked the idea of using pH to connect with the theme of this jam. The gameplay is simple and entertaining, I had a great time playing your game, congrats!

Using pH for the theme is clever, I love it. Game was solid, overall a great entry!

Thanks! Glad you enjoyed it.