Submitted by spoonsweet (@spoonsweet1) — 17 minutes, 48 seconds before the deadline
Add to collection 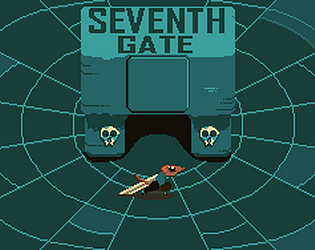 Wildcards Used
All were used as inspiration, non implemented :D

Well it seems like an interesting concept and I've gotta say that the base movement seems interesting and has some promise.  The attacks could be better but mostly just because there's not much feedback and no knockback leading to a feeling of not a lot of weight behind the swings.

Otherwise though the only glaring annoyance for me would be the area between the start and the end.  The fact that it completely changed the view and movement system was a bit jarring and it felt a little slow in comparison to the area before.

It definitely sounds like an interesting concept behind the game though, kinda sad about scope creep.  Though it seems that may also be down to the time spent on visuals ?

The graphics are beautiful! Music is good, too. Unfortunately there's basically no gameplay loop, but you did a good job of making something that can at least show the graphics you made.

Cool game! I completely understand the scoping challenge, but I think this game has a ton of potential. I loved the music and I love art. Hope to see more progress later.

Wow, great work on the animations and art. Scoping has got to be the biggest challenge of Jam.

Too bad you didn’t finish, but looks like a great start!

Submitted
The Seven Trials of Chronos
LikeReply
ShovelSubmitted1 year ago(+1)

Wow, the art is incredible! The animations feel great, really amazing work.
I'd love to play a completed version of this in the future!

Just uploaded this and I am so excited and you are the lucky person that will see it first :D

Thank you! With your encouragement and support, I might as well!

It looks nice, unfortunately for me everytime I hit the space bar to have the character hit, it opens the Twitter page for me for some reason. If that could be hidden in a menu, that would be great. But I can see it being a lot of fun at a later stage of development

Such accidental promotion is a power to harness for sure. Could you come with me please, I think you are on to something :D

lol! I Am so sorry about this! Thank you for playing and for the words of encouragement!

Looks like the start of something cool. Nice art.

Hey thanks! Encouraging comments help me consider working on it more :D

Had fun with what was there. Seems good so far! There was a slight pause after dodging which was a minor inconvenience but other than that it played well.

Thank you for the support!

Nice work in the graphics and animation departments!

Thanks for dropping by!

Great animations :) would love to try it out again if you make it complete.

Hey! Thank you for checking it out, and for the words of encouragement! I will let you know if I do :D

LOVED the art style on this one. I would have really liked to see it finished. You should still finish it!

thank you for the inspiring words and your support! Really happy you enjoyed it!

Art style is very good, itch.io viewport is too small to see anything. Cool game but unfinished.

Submitted
They are lost, You must help them.
LikeReply
spoonsweetDeveloper1 year ago

hey! Thanks for playing! Glad you like it! I completely forgot to enable Fullscreen mode... thanks to you less people will be frustrated:D

Thanks again! And have a good one!